Enthusiastic about the opportunities

For Captain Richard von Berlepsch, Managing Director Fleet Management at Hapag-Lloyd, investments in LNG are not a question of love and hate, but about good entrepreneurship. For him, LNG is one of several technologies that is set to make shipping greener and that ought to be tried out. “With a company as big as ours you must be open to all kinds of technological ideas and innovations,” von Berlepsch said in an interview with MARITIME IMPACT at the Hapag-Lloyd Ballindamm headquarters. While the rapid technological change seen by the industry may cause concern for some people, being open and choosing the right moment to invest is what good companies are all about, the manager said. “I’m more enthusiastic about the opportunities than about the risks.”

Von Berlepsch has good reason to strike a positive tone. Hapag-Lloyd is spending 30 million US dollars — around one fourth of its first quarter 2019 profit — to take one of its biggest vessels, the 15,000 TEU Sajir, to a Shanghai shipyard for more than three months from May 2020, forcing the carrier and its four Asian alliance partners to balance out a longer than usual downtime on the high-volume East–West trade lane through other services. But it’s for a good reason, as dockworkers at the Huarun Dadong shipyard will convert Sajir’s existing conventional engine to a dual-fuel system that will allow the five-year-old vessel to burn LNG and — as a backup — low-sulphur fuel. The planned works include the installation of a DNV GL approved gas storage system covering an area equivalent to 290 containers.

“What many people don’t realise is that it’s not simply a new filter that’s being installed; technically, we’re completely reinventing the wheel here,” said von Berlepsch. “It may be compared to the moment when steam boats replaced sailing ships.” The conversion, which is to follow several months of preparatory steel work by yard workers in China, will enable the Sajir to cut its CO2 emissions by about 20 per cent, while reducing sulphur dioxide and particulate matter by more than 90 per cent once it returns to its route from Asia to northern Europe via the Suez Canal.

With the retrofit Hapag-Lloyd as well as its project partners including DNV GL and engine maker MAN are breaking new ground: Never before has a container ship of that size been converted to LNG propulsion. As the shipping industry is set to face increasingly stringent emissions rules in the years ahead, Hapag-Lloyd’s pilot may well be paving the way for similar retrofits in the future. 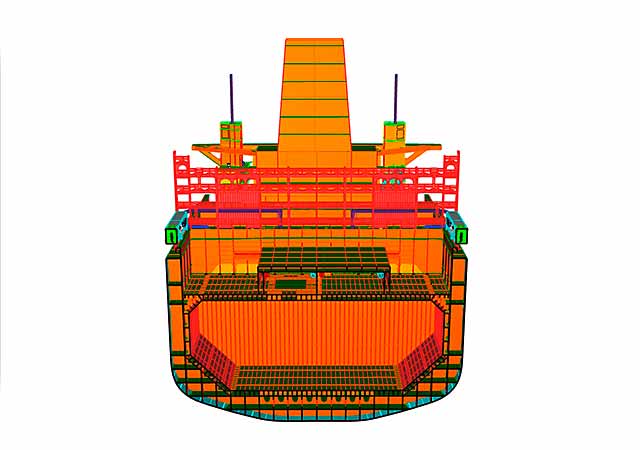 A membrane tank offers the most efficient way to utilize the available space for fuel.

Looking at the bigger picture

While the price of LNG may be cheaper than low sulphur fuel oil when the global IMO 2020 emission cap takes effect, critics argue that retrofit costs surpass expenses for newbuildings and are simply too high to make it an attractive business case. For von Berlepsch these arguments don’t count: “It wouldn’t be a pilot project if we didn’t look at the economics of it, but making money isn’t a priority in this case,” he said. Hapag-Lloyd expects that it will take four to seven years to recover the cost of the Sajir retrofit. The fact that LNG fuel tanks along with the necessary equipment need more space compared to conventional propulsion systems also can’t dissuade von Berlepsch from his plan. “You must look at the bigger picture,” said the manager.

The pilot project of the Hamburg-based carrier doesn’t reflect the general state of the industry on LNG, according to Martin Wold, Senior Consultant for environmental technology at DNV GL. “Hapag-Lloyd, including UASC and some others, have really done a great job in taking a more or less detailed look at the design of LNG equipment,” he said. Dual-fuel engines, boilers and special grade steel to support heavy LNG tanks are among the initiatives taken by industry pioneers. “But on the other side you have companies that have done very little in terms of LNG readiness and that only have a rough idea of where LNG tanks and equipment could be installed on a ship.”

2019 has seen a positive trend in orders for LNG-fuelled vessels across all ship types with a net order increase of 22 ships in the first quarter, most of them large ocean-going vessels, according to DNV GL’s Alternative Fuels Insight database. The total number of LNG ships has passed the threshold of 300 with about half of them already in operation and the remaining ones on order. About 40 per cent of all LNG-fuelled ships sailing the oceans today have been classed by DNV GL, making the society a global leader in that field.

Cooled down to minus 162 degrees Celsius, gas becomes liquid and shrinks to a fraction of its volume and can thus be bunkered while crossing the oceans. The Sajir’s membrane tank will be capable of storing up to 6,700 cubic metres of gas, meaning the vessel will have to bunker twice per round trip. “Once in Asia, once in Europe or twice somewhere in between,” said von Berlepsch.

Looking at Europe, the supply side is still a mixed bag. While countries such as France, the UK, the Netherlands, Poland and Lithuania are already operating import terminal facilities, Germany, Europe’s biggest economy, is still in the planning phase with the government expecting at least two terminals to be built. The first larger LNG tankers suitable for big merchant vessels like the Sajir are due to enter service in mid-2020, said von Berlepsch. “With a tank as big as ours, you can’t just drive by with a tank truck to fill it up.”

While LNG trade is expanding, connecting hitherto disparate markets and weakening the historical price link to oil, gas still isn’t a global commodity, the manager said. “US and Asian prices are completely different.” The arrival of large LNG tankers, however, may change that”, said von Berlepsch. “As soon as large tankers enter service, ship operators will be able to decide more freely where they want to refuel and prices will converge.”

The Sajir was the first of a total of 17 “LNG-ready” ships that entered service from 2014 for United Arab Shipping (UASC). DNV GL confirmed the “LNG-ready”-concept including void spaces and steel strength as an industry first back then, while also awarding the series with CLEAN class notations and Energy Efficiency Certificates.

Later, in 2017, the Sajir and its sisters became a key dowry that Arab shareholders provided for UASC’s marriage with Hapag-Lloyd. The merger created the world’s fifth largest container shipping line and there’s a chance that Hapag-Lloyd will convert the entire series of 17 ships if the Sajir LNG system proves successful and the supply situation guarantees smooth operations, said von Berlepsch.

Technical challenges faced by the LNG pioneer include keeping the gas in the insulated tank at the right temperature even when the vessel is anchored in a bay for a longer period. As an idle ship needs less power, the gas pressure inside the tank will increase and may lead to excess boil-off gas, said von Berlepsch. “LNG-fuelled ships need to be handled completely differently.” That’s why crews at Hapag-Lloyd are undergoing intense training courses before going on board an LNG vessel. In case of the Sajir, the vessel will be manned by an all-German crew and will fly the German flag. 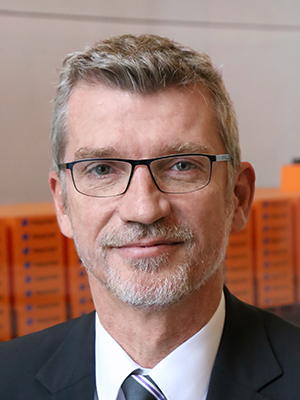 What many people don’t realise is that it’s not simply a new filter that’s being installed; technically, we’re completely reinventing the wheel here.

With the IMO 2020 “sulphur cap” just around the corner, Hapag-Lloyd will also test and evaluate the use of scrubbers to clean exhaust gases on initially ten of its 235 ships. Estimated costs range between seven and ten million US dollars per vessel. “It is one thing to weigh up the advantages and disadvantages of a technology and another to install something and see the real numbers,” said von Berlepsch.

The large majority of Hapag-Lloyd’s vessels with an average age of eight years will, however, shift to low-sulphur fuel oil in the coming months — which represents a strategic decision, von Berlepsch pointed out. “We are deeply convinced that the on-land production of the new fuel types is the most environmentally friendly and best way to comply with the IMO 2020 rules,” he said.

Still, clients must be aware that the one billion US dollars in extra fuel costs seen by Hapag-Lloyd per year must be shared and that burden-sharing starts before 2020, said the manager. “We cannot just flip the switch on 1 January.” Instead, Hapag-Lloyd vessels will start to shift to low sulphur fuels in the fourth quarter to be able to meet the IMO deadline. Hapag-Lloyd has also implemented a new formula dubbed Marine Fuel Recovery (MFR), a mechanism that incorporates parameters such as vessel consumption, fuel type and price and containers on board. “The MFR makes fuel price calculations very transparent and fair for all parties involved,” said von Berlepsch.

Meanwhile, Captain Richard von Berlepsch is confident that the Sajir, named after a region in Saudi-Arabia known for its lush landscape and farming heritage, will live up to its name and be a “fruitful” experience for Hapag-Lloyd and the industry as a whole. “And we’re doing good for the planet,” said von Berlepsch. After all, that too is what good entrepreneurship is all about.
Source: DNV GL Maritime Impact (https://www.dnvgl.com/expert-story/maritime-impact/Reinventing-the-wheel.html)