Confidence in the shipping industry has risen in the last three months despite ongoing geopolitical uncertainty, according to the latest Shipping Confidence Survey.

Brokers were behind much of the increase in confidence. Their score was up from 5.2 to 5.9. The rating for owners and managers was down slightly from 6.4 to 6.3 and from 6.0 to 5.8 respectively. Charterers’ confidence was also down, from 6.8 to 6.0, although this still compared favourably with the rating of 5.0 returned 12 months ago.

The likelihood of respondents making a major investment or significant development over the next 12 months was down from 5.5 to 5.3 out of 10.0. Charterers’ confidence in this regard reached a record high of 7.3. Brokers’ confidence was also up, from 4.1 to 4.9. However, owners recorded a fall from 6.3 to 5.4. Managers’ ratings were unchanged at 5.6.Expectations were up in Europe from 5.2 to 5.3, but down in Asia from 6.2 to 5.2.

The number of respondents who expected finance costs to increase over the coming year was down from 67% to 48%, the lowest figure since August 2016. The figures for all categories of respondent were down, in the case of charterers from 80% to 33%.

Demand trends were cited by 26% of respondents as the factor most likely to influence performance over the next 12 months. Competition (19%) and finance costs (13%) featured in second and third place respectively in this context.

Net freight rate sentiment was positive in all three main tonnage categories identified, with 51% of respondents expecting higher rates over the next 12 months in the tanker market. This represents a drop of 9 percentage points on the previous survey score of 60%. Respondents expecting lower tanker rates fell from 9% to 6% this quarter. 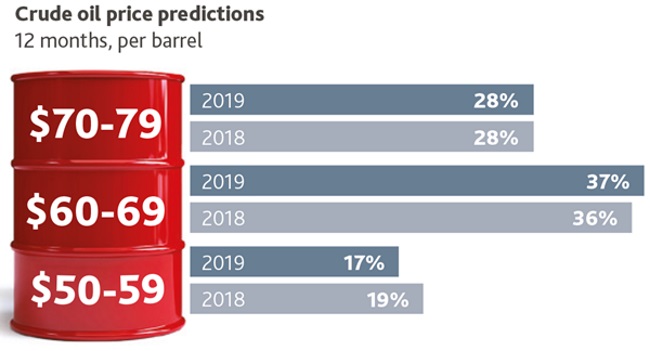 Richard Greiner, Partner, Shipping & Transport, says, “It is encouraging to begin the year with a small uptick in confidence. Despite continuing doubts and fears about trade wars, China’s GDP, uncertainty over exchange rates, President Trump’s decision-making, Brexit and general political instability in many parts of the world, shipping can still find reasons to be cheerful.

“Net freight rate sentiment remains positive in all three main tonnage categories, and there is a growing recognition that shipping is emerging from an extremely difficult period as a leaner and greener industry.

“A number of respondents noted that the financial difficulties faced by many companies in recent years have changed the dynamics of the industry, with an increase in consolidation, restructuring and mergers & acquisitions.

“At the same time, there appears to be general recognition that the likes of the IMO 2020 and Ballast Water Management regulations will help rid the industry of poorly maintained tonnage and increase both the viability and the pedigree of the world fleet.

“This will also appeal to potential investors looking to back environmentally compliant and technologically savvy industries. It seems that the shipping industry must prioritise achieving the benefits of regulatory compliance and technological innovation over the coming years.”