Republic Polytechnic (RP) and port operator PSA Corporation Limited (PSA) officially launched the RP-PSA Experiential Laboratory on the second day of RP’s Open House 2018. The lab will provide an authentic simulated environment for classes to be conducted based on real-life port management and operations scenarios. The launch was attended by Guest-of-Honour, Minister for Education (Schools) and Second Minister for Transport, Mr Ng Chee Meng, who toured the lab and observed a live demonstration of simulated port operations led by RP students.

Part of a three-year Memorandum of Understanding (MOU) signed between PSA and RP in 2015, the new lab will further port operations and technology-related training and development among RP students and staff. 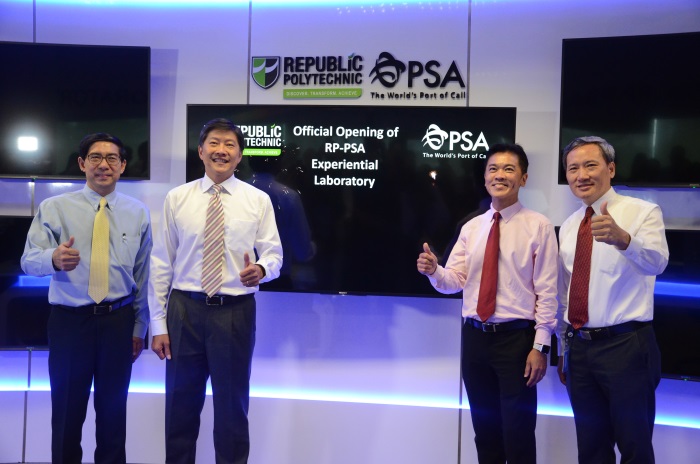 The lab is equipped with a port simulation hardware and software system mimicking operations at actual PSA container terminals allowing students to visualise how changes affect plans and their dependency effects. In addition, a group of RP final-year students built a customised port model from scratch, allowing the demonstration of different modes of transport and job roles in a port setting.

“The RP-PSA Experiential Lab underscores our commitment to developing industry-ready professionals to take on port management and operations jobs of the future. The lab will support the growth of Singapore’s port and shipping industry, enabling the mastery of skills relevant to the industry. Coupled with Republic Polytechnic’s Problem-based Learning pedagogy, students will undergo contextualised learning according to the needs of the industry, allowing them to be industry-ready upon graduation,” said Mr Yeo Li Pheow, Principal/CEO, Republic Polytechnic.

“RP and PSA have had a longstanding partnership over the years. As an important industry partner for RP, PSA has provided internship opportunities for our students to benefit from valuable practical experience in the port industry. We believe this lab will further raise the productivity levels and excellence of Singapore’s ports and ultimately boost Singapore’s position as a global maritime hub. We look forward to our continued collaboration with PSA into the future,” added Mr Yeo.

“As PSA develops our next generation of highly automated and intelligent container terminals, we need to continue to attract young talents who possess the necessary competencies. The RP-PSA Experiential Laboratory will equip RP students with a base of foundational knowledge which will be further sharpened through internships at PSA. This collaboration is a win–win arrangement for both RP and PSA, and I look forward to welcoming more young talents to join the vibrant and exciting port industry,” said Mr Ong Kim Pong, Regional CEO Southeast Asia, PSA International.

The joint lab is part of PSA’s ongoing effort to cultivate an increased awareness of careers in the port. It will also serve as a career hub for RP students who are interested in exploring a career in port operations.
Source: PSA Corporation