It may already be too late to listen to Martin Tallett.

The consultant, who has more than four decades’ experience in oil refining, presented research two years ago to the United Nations’ agency charged with setting rules for the maritime industry. In it, he warned oil markets would be strained if tough standards for shipping fuel were imposed from 2020. The start date was set anyway.

Fast forward to today, and Tallett says he’s more concerned. What worries him is a demand surge so great that by 2020 the world will need 2.3 million barrels more oil a day than was being predicted when he did his previous research. That’s close to Germany’s consumption.

“The main difference is that global demand level has gone up since 2016,” said Tallett, the president of EnSys Energy & Systems Inc., a Massachusetts-based consultant. “We don’t believe the refining industry can produce all of the fuels that would be needed to achieve 100 percent compliance. It’s going to be potentially rather chaotic and stressed.” 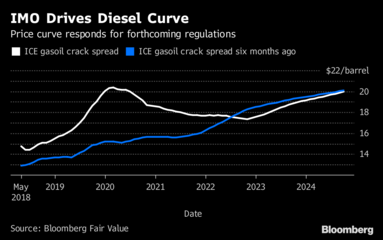 Now, an expanding army of analysts, traders and industry heavyweights (go to the bottom of this story to see a selection of their comments) are warning of the risk of turmoil — and lucrative trading opportunities — while a shipping group has even talked of threats to world trade and maritime safety.

Tallett’s firm, which had previously worked with the UN’s International Maritime Organization, sought to do research for the agency again when the IMO was deciding on a start date for the rules that would cut sulfur content in most ship fuel to 0.5 percent, down from 3.5 percent in most parts of the world at the time (and still). 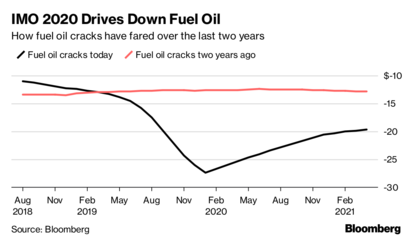 The researcher that the IMO did end up choosing to perform its fuel-availability study, Netherlands-based CE Delft, found there wouldn’t be shortages globally. EnSys, though, still did similar work alongside shipping researcher Navigistics Consulting, after being commissioned by a shipping trade group and a nonprofit that seeks to improve the oil refining industry’s environmental and social performance. They came up with different results.

In a nutshell, Tallett, a chemical engineer by training, says the problem is insufficient equipment across the refining industry that would remove sulfur. There hasn’t been enough investment since the 2020 deadline was set to address the issue — either by refiners or shipping companies who can get kit fitted on their vessels to eliminate the pollutant, allowing them to burn otherwise non-compliant fuel.

As things stand, that means that the main way shipping’s demand for fuel will be met is if diesel — initially as much as 3 million barrels a day of it by Tallett’s reckoning — gets diverted to fueling ships, instead of conventional on-land uses like transport and industry. That’s unlikely to be achieved in practice, he said.

Ample Time
On top of all that, Tallett says more crude will be to be required as a result of the rule. If he and other doubters are correct, it may already be too late to address the issue from a legislative point of view. Under the IMO’s processes, it would take 22 months to adopt and fully implement a change to the rule — several months after it’s due to enter into force were any such amendment proposed today.

The IMO says it gave the refining industry ample time to get ready — the switch was being discussed long before 2016 — and points to the study by CE Delft in response to questions about fuel availability. It also says it’s working to ensure a smooth transition and to help vessel owners if they find the correct fuels aren’t available when the switch takes effect. For its part, CE Delft remains confident there won’t be wild gyrations in the oil market, says Jasper Faber, the lead author of its study.

No Shortage
“Fundamentally, there should not be a shortage,” even if there may be an initial period of teething trouble and some regional supply issues, he said by phone.

In the past few years, some major oil companies have begun producing ultra-low sulfur fuels, which will help the refining industry meet the IMO-related fuels demand from shippers, Faber said.

For Tallett, though, the issue goes beyond shipping or shipping fuel. There will, overall, be a need to switch roughly 4 million barrels a day of higher sulfur fuels to lower-sulfur equivalents, a process that will happen fairly abruptly since shipping companies won’t want to pay higher costs before they absolutely have to.

Refiners’ ability to switch will be about 3 million a day at most, he estimates. That would take a huge bite out of the diesel market and have wide-ranging impacts for other processed fuels, Tallett said.

“For clean products, their prices go up,” he said, adding there will be a clamor for the kinds of crudes that yield less high-sulfur fuel and more products like diesel. “The effect is likely to be significant in the first half of 2020.”

Here are a selection of recent comments on the sulfur rules from key figures across the oil, refining, shipping and trading spheres:

• “We still expect a shortage of low-sulfur bunker”: Kristine Petrosyan, an analyst in the oil industry and markets division, at the IEA, an adviser to 29 governments.
• “It will be very interesting. We look forward with excitement, for us it’s clearly an opportunity. The problem is to how to combine the different type of qualities. You can’t really blend them. There will be these type of issues to sort out in the short term”: Gunvor Group CEO Torbjorn Tornqvist
• “A certain amount of oil-market turmoil and a fair dose of noncompliance increasingly seem a given at the beginning of the new emissions regime”: Antoine Halff at Columbia University, citing conversations with industry participants.
• “Unless a number of serious issues are satisfactorily addressed by governments within the next few months, the smooth flow of maritime trade could be dangerously impeded,” Esben Poulsson, chairman of the International Chamber of Shipping
• IMO 2020 rules will create “severe tightness” for fuels like diesel and marine gasoil: Morgan Stanley analysts including Martijn Rats. The move could help drive crude to $90 a barrel.
• There’s “no way on this planet” refineries will be ready by 2020: Jan-Jacob Verschoor of Oil Analytics, a chemical engineer who previously worked on refinery-construction planning for Royal Dutch Shell Plc.
• “We are concerned about different speeds of implementation in the rest of the world”: John Cooper, the director general of FuelsEurope.
Source: Bloomberg