An increase in Chinese purchases of U.S. LNG offered a welcome development for U.S. exporters hit by a wave of cargo cancellations during the coronavirus pandemic this summer, but it might not be enough as top Chinese and U.S. trade officials review their “phase one” trade deal Aug. 15.

China’s imports of the American fuel totaled about $300 million during the first half of the year, according to recent data from Panjiva, a business line of S&P Global Market Intelligence that provides news and analysis about global supply chains.

As with other Chinese purchases of U.S. energy goods, the amount of LNG may be too little, too late to maintain the trade deal. China has fallen almost $40 billion behind its commitments to buy U.S. goods under the agreement amid coronavirus-linked supply chain disruptions and demand shocks. Imports of agriculture and energy goods such as LNG were a bright spot in the deepening gloom of political and trade relations between the two countries, but even these purchases were well short of targets. 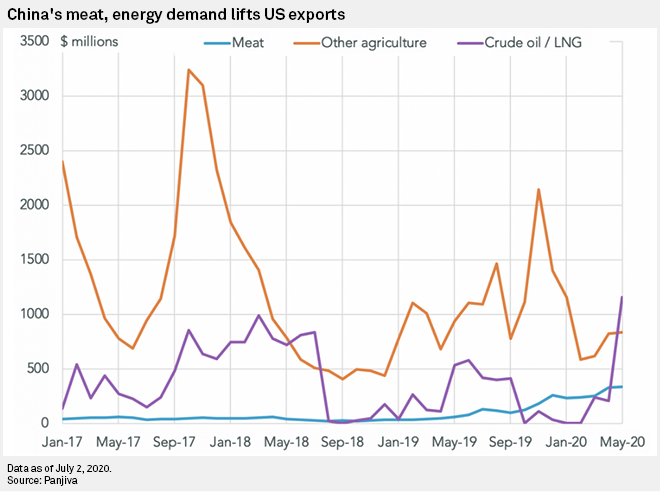 China agreed in January to more than double its imports of a basket of 548 U.S. products that would amount to an extra $200 billion in purchases through 2020 and 2021 compared to 2017 levels. To achieve that target, China would need to buy about $11.9 billion of these goods every month, but its total purchase only reached about $6.3 billion in June.

LNG imports helped drive the shipments of energy products, a category of goods in which China could make significant headway toward its goals. Such products — which include LNG, oil, refined petroleum products and coal — should account for $52.4 billion worth of China’s purchases over 2017 levels across the next two years, although product-specific details about the goals were not released. For 2020, the target is $18.5 billion over what China bought in 2017. But year-to-date purchases of energy goods had amounted to only about $2.9 billion by the end of June, according to Panjiva.

“Taken together the data shows that the purchasing commitments element of the trade deal is out of compliance, creating another potential source of friction between the two countries which would come on top of: U.S. sanctions regarding Hong Kong’s new security laws; U.S. engagement with Taiwan; sanctions targeted repression of the Uigher people in Xinjiang; apportionment of blame for the propagation of SARS-COV-2; and ownership and control of TikTok among others,” Panjiva said in a recent analysis.

Even if the trade shortfalls do not scupper the deal, some market observers have warned that the escalating political tensions could.

Analysts at independent research firm ClearView Energy Partners said the trade bargain was “unlikely to outlast the November 2020 U.S. elections” and could collapse before then. ClearView said the political tensions also undermine a potential understanding between the countries that commitments to long-term supply agreements with U.S. LNG developers will count toward the $52.4 billion goal, as a pair of U.S. industry groups pitched to the White House in May.

Another analyst recommended actions to save the deal. “At the upcoming mid-year review, both the U.S. and Chinese administration should recognize that it is simply not going to be possible for China to meet its 2020 obligations,” Robert Rennie, an analyst at Westpac Banking Corp., wrote in a recent analysis. Instead, “discussions must start to turn to how to deal with a revision, to limit the risks of a collapse.”

From the beginning, experts were skeptical that China could meet the massive commitment to buy energy products. They pointed to market constraints that became more severe in the pandemic. But the bargain did bring an end to a yearlong freeze on China’s imports of U.S. LNG exports that resulted in tit-for-tat tariffs imposed during the trade war. After signing the deal, China allowed exemptions to a 25% tariff on LNG that enabled Chinese buyers to resume purchasing the fuel in March. 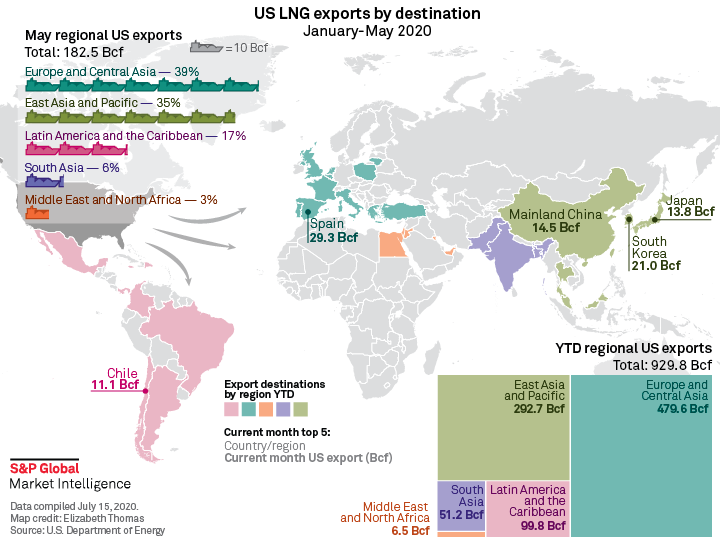 Chinese demand was never going to be enough to prevent shut-ins across the six LNG export terminals operating in the U.S., but it may have helped soften the blow.

About 53.3 Bcf of U.S. LNG departed for China from March through May, according to an S&P Global Market Intelligence analysis of the most recent LNG export figures from the U.S. Department of Energy, released in July. In June, China increased its total purchases of the low-priced LNG by 29% year over year amid a slow world market recovery from disruptions caused by the pandemic, according to data released by the country’s General Administration of Customs. Imports of LNG from the U.S. amounted to about 340,000 tonnes, the greatest volume since May 2018.

It is not clear how much LNG China can absorb, and there is the potential for further outbreaks of the coronavirus.

The biggest U.S. LNG exporter, Cheniere Energy Inc., has shipped “over half a dozen cargoes now to China as things there start to normalize … in terms of demand, in terms of tariffs, and [as] other opportunities present themselves,” Cheniere Executive Vice President and Chief Commercial Officer Anatol Feygin said during an Aug. 6 earnings call.

“Clearly, there is a headwind in terms of the geopolitical backdrop that we’re operating in,” Feygin said. “But commercially, there’s a massive tailwind. And this is the flexibility, the reliability that we’ve demonstrated, the relationships we’ve built on the commercial side. [They] all position Cheniere quite well to capture a substantial share of that market when the stars align.”
Source: Platts