China’s imports of MHP (mixed hydroxide precipitate) and matte hit a fresh record in April after the speed-up of NPI-to-matte conversion and the ramp-up of MHP projects from Indonesia, both suitable for making sulphate to meet the demand from the battery industry. During the first four months of 2022, total MHP imports into China have almost doubled from the same period of last year. Meanwhile, imports of matte jumped by 56% year-on-year, with March and April seeing the strongest volumes. 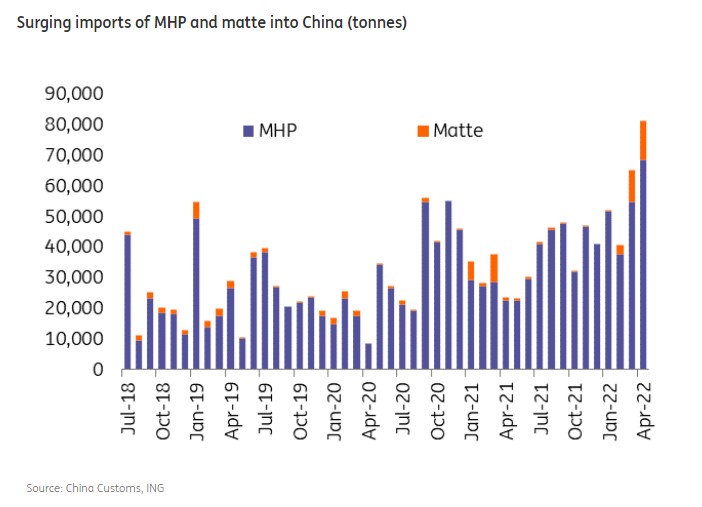 However, as the supply of feed sources for making sulphate accelerated, especially after the epic squeeze in early March, end-use demand for sulphate was hit hard by Covid lockdowns and some sulphate and precursors producers were reported to have cutbacks. 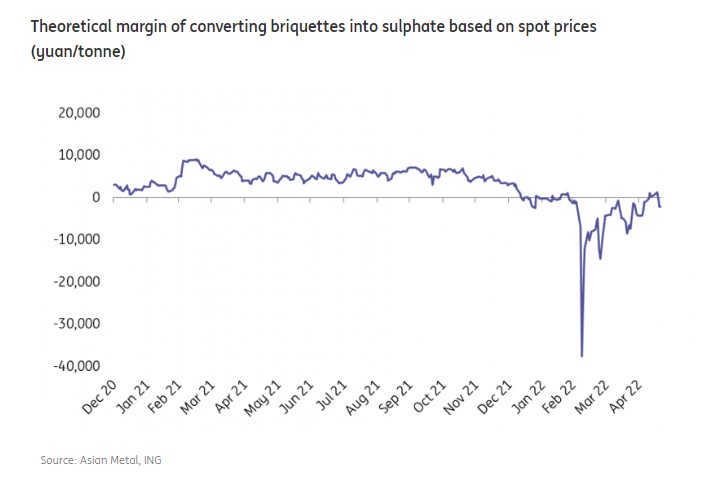 The current forecasts of the market surplus are primarily dominated by Class 2 supply. Instead, the Class 1 market has remained tight, especially those for exchange deliverable nickel. As a result, Shanghai Futures Exchange nearby spreads have recently surged to a record backwardation.

This now creates incentives to convert matte/MHP into Class 1 nickel that meets the standards for exchange delivery. China Huayou recently announced that it will restart its plant to produce refined nickel using MHP. Meanwhile, we estimate at least 4kt matte was used to swap for Class 1 nickel last month. All of these suggest that the currently elevated London Metal Exchange prices could invite deliveries due to improving availabilities in the right type of nickel. Should that happen, spreads could come under further pressure.
Source: ING