China is the world’s largest importer of crude oil and Russia is the second largest crude exporter. Much of the crude oil trade between the two countries, however, is piped and the short distance from Far East Russia to China also limits the impact on demand for crude oil tankers. Still, a change in the Russia to China dirty trade has the potential to impact tanker tonne miles demand as it could come at the expense of longer trade lanes.

“Since Russia’s invasion of Ukraine, the Russia to China dirty tanker trade has soared 94% y/y measured in deadweight tonne miles,” says Niels Rasmussen, Chief Shipping Analyst at BIMCO and adds: “this compares to a year-to-date increase of only 9% y/y prior to the invasion.”

In comparison, total dirty tanker deadweight tonne miles exports from Russia, and imports to China, have risen 14% y/y and 4% y/y respectively since the invasion; highlighting how the Russia to China trade has increased in importance for both countries. Due to the demand spike in early 2020, which has not been repeated since, it should be noted that YTD 2022 deadweight tonne miles are trailing 2020 by 20%. 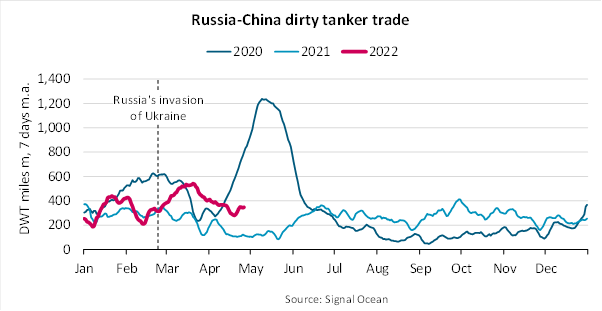 “Accounting for 58% of the increase, it is particularly the relatively long Black Sea to China trade that has driven the overall increase in the post-invasion Russia to China dirty tanker trade,” says Rasmussen. He adds that “as deadweight tonne miles in the even longer Brazil to China trade has decreased 26% y/y during the same period it appears, however, that the shift in China’s import patterns has reduced average miles/tonne in the Chinese import trades which overall is a negative for the dirty tanker trade.”
Source: BIMCO, Niels Rasmussen Chief Shipping Analyst