Over the past two decades Russia has managed to move from a net importer of wheat to a net exporter, displacing the EU to become the largest exporter in the 2016-17 marketing season, and continuing to lead since.

Increasing planted area and higher quality of the grain produced ought to support exports. But from January the start of the IMO 2020 regime for marine fuels could be an obstacle, pushing up freight costs and threatening Russia’s recent gains in Southeast Asia, even as other opportunities emerge in the Middle East and other regions closer to hand.

Rapid growth
Wheat exports from Russia as a percentage of the global total have doubled since 2013-14 (July-June), with S&P Global Platts Analytics expecting the country to account for 20% of the global export total in 2019-20.

Higher wheat output and quality, as well as low production costs, have helped propel Russia to the top position among wheat exporters. Production has more than doubled since the 2000-01 marketing season, according to US Department of Agriculture (USDA) data.

Until 2009, the majority of wheat area was taken up by the spring crop, while now nearly 60% is under the winter crop. Mild winters, a changing climate, and the willingness of farmers to plant higher-yielding winter crop have led to this expansion of winter wheat share in the total wheat production.

Platts Analytics expects this trend to continue into 2020-21, together with an overall increase in total wheat harvested area. Assuming beneficial winter conditions and no major unfavorable weather events in the spring and early summer, Platts Analytics forecasts Russian wheat production at 79.3 million mt for the 2020-21 marketing season.

Volatile weather during the 2019-20 growing season has limited Russian wheat crop prospects. Platts Analytics estimates Russian wheat production at 75.3 million mt, 5% above last year, but 12% down from the record level in 2017-18.

However, the quality of the 2019-20 Russian crop is much higher than in previous years. The share of milling wheat (1st-4th class wheat, according to Russian classification, a quality classification determined by the percentage of protein contained in the kernel) has increased to nearly 80% of total wheat production compared with a three-year average of 70%. On the other hand, feed wheat – 5th class – production is down 10% compared with last year, contributing to 20% of total production.

Wheat and freight
IMO 2020 – the lower sulfur cap on marine fuel globally that kicks in from January 1, 2020 – continues to cast uncertainty on freight rates. Russian wheat has been able to gain significant market share in Asian markets in recent years due to the price competitiveness of Russian wheat even after accounting for Australia’s lower freight rates into Southeast Asia. 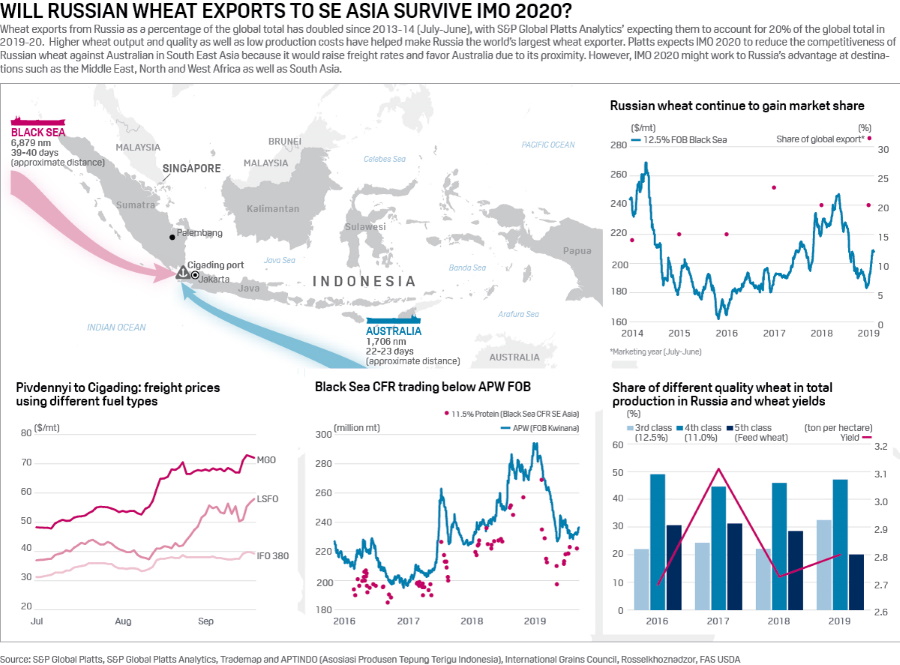 Platts estimates that Russia would start losing market share to Australian wheat in Southeast Asia once the Russian-Australian FOB wheat price spread falls below $25/mt. Platts expects IMO 2020 to reduce the competitiveness of Russian wheat against Australian in Southeast Asia because it would raise freight rates, benefiting Australia due to its proximity to the region. However, IMO 2020 might work to Russia’s advantage at destinations such as the Middle East, North and West Africa as well as South Asia.

Russia’s ability to negotiate opening new markets for its wheat – such as Saudi Arabia, bodes well for the country’s ability to find new target markets for its continuous wheat production growth. So does a deal with key importer Vietnam to resume Russian wheat shipments in October, after the latter asked Russia to halt wheat export licenses due to quality concerns.

While major Southeast Asian countries are expected to account for 15% of total global wheat imports in 2019-20, according to USDA data, the Middle East, North and West Africa, China and Bangladesh are estimated to account for over 30% of total global imports. This is where Russian wheat would have a clear price competitiveness advantage compared with major wheat exporting regions.

With a poor crop in Kazakhstan, weather uncertainties in Australia and Argentina lowering wheat production forecasts, and the expected continuous growth of grain production in Russia, the importance of the Black Sea crop will continue, expanding the country’s share of the global export market.
Source: Platts