Russia Is Now Sending Its Main Crude Oil Through the Arctic

Russia is sending its main crude oil through the Arctic Sea for the first time as melting ice increasingly opens up the controversial trade route to commercial shipping.

Two oil tankers, between them carrying about 1.5 million barrels of Urals crude from the port of Primorsk in western Russia, sailed through the Arctic ocean to China in recent weeks, according to ship-tracking data compiled by Bloomberg. It’s the first time that’s happened since at least 2011, according to the Northern Sea Route Information Office.

The cargoes represent a tiny fraction of what is a fast-expanding trade route. Shipments of commodities and other goods across the top of Russia doubled to about 20 million tons last year with oil and gas dominating. Companies using the Arctic benefit from lower fuel bills and quicker deliveries to customers. The trade-off is a threat to the environment. 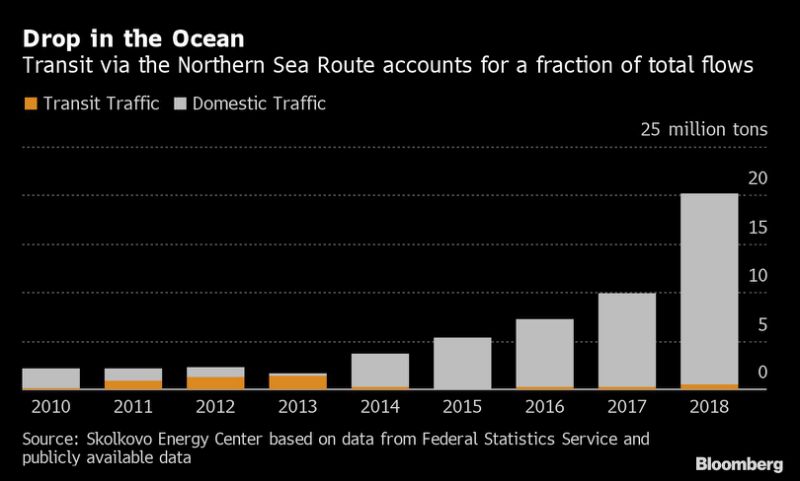 “With climate change there’s a possibility you could see more shipments through there as the ice melts,” said Christopher Haines, an oil analyst at Energy Aspects Ltd. in London, adding that savings on time and costs are the driving forces behind the increased use of the Arctic.

There’s long been opposition to using the Arctic for shipping, with organizations including the UN’s intergovernmental body for climate change saying it could have negative consequences for the region including higher emissions and threats to marine ecosystems. The International Maritime Organization, the main entity overseeing shipping, is considering regulating the use of heavy fuel oil as a shipping propellant in the Arctic.

Nike Inc. last week urged companies to avoid shipping through the region. Signatories to a pledge it made include Gap Inc., H&M Group Inc., and shipping companies CMA CGM SA and Hapag-Lloyd AG. That hasn’t stopped the flow of commodities — especially from Russia.

There are several dangers to transporting crude oil through the route, according to Malte Humpert, founder of The Arctic Institute, an NGO researcher. The particular emissions coming from burning heavy fuel oil, commonly used in oil tankers, accelerate ice melt, he said.

The Arctic sea has already lost around 40% of its ice area since 1979, according to a UN report. The melt creates a vicious circle, amplifying the effects of climate change at certain times of the year, it says.

“The most dangerous cargo you could ship through the Arctic could be crude oil,” Humpert said of the risk of spills. “In terms of low-risk, high-impact if it does happen, it will have disastrous impact.”

The rate of ice melt in the region has allowed shipping through the so-called northern sea route to become more commonplace during summer months. Last year, the Venta Maersk was the first commercial container ship to use it.

The crude oil carried by the two tankers would usually have traveled via Egypt’s Suez Canal, or around Africa, to reach Asia. One of the vessel’s voyages took about a month. On the normal route, shipments can take longer than 50 days and require cargo-transfers at sea onto bigger supertankers that are best-suited to such long-distance voyages. Other crude oil, shipped from Russia’s Arctic Sea ports, has already been using the trade route.

Spiking rates for supertankers earlier this month also made using smaller tankers, such as the ones shipping Urals oil to China via the northern route, more competitive, said Jefferies LLC analyst Randy Giveans.

When rates surge for the industry’s biggest tankers, known as very large crude carriers, the oil companies that book them will sometimes divide cargoes and place them on smaller tankers if doing so is cheaper.

“You’ve seen some cargo splitting, so smaller vessels are taking even longer voyages like the Arctic route over to Asia,” he said.