Russia is sending more natural gas to Europe than ever before as a blast of Arctic air lifted demand for heat and electricity, underlining the region’s dependence on its eastern neighbor.

The freeze severely tested Europe’s energy network over the past week. Spot gas prices tripled to a record, drawing in more Russian supplies by pipeline and prompting a tanker of the fuel in its liquid form to schedule arrival in the U.K. next week.

With a dissipating capacity to store gas and few tankers of liquefied natural gas arriving this season, Europe and particularly the U.K. is increasingly reliant on Russia to feed its energy needs. Moscow-based Gazprom PJSC, the continent’s dominant supplier for decades, used the opportunity to crow about its essential role.

“Only Gazprom is capable of increasing gas supplies to European customers to maximum levels at a breakneck speed,” Alexey Miller, the chief executive officer of Gazprom, said in a response to questions. “There’s no other supplier that could cope with the task.”

Daily shipments from Russia’s state-controlled Gazprom skyrocketed to a record in February, according to the company’s data. Europe’s consumption jumped to highest level in at least five years during the week through Feb. 24, and this week’s cold snap drove demand higher still, according to estimates from London-based Marex Spectron Group Ltd.

It will be the first seaborne gas delivery to the U.K. since Feb. 22, which was the only cargo that month.

Tanker-tracking data from Kpler SAS indicate the Maran Gas Ulysses will deliver LNG to the Dragon terminal in Wales on March 6. The cargo from the Yamal LNG plant in Siberia will be transferred from the project’s ice-class tanker onto the cheaper conventional one at France’s Montoir terminal.

“We see the coldest end of the winter in years, and Russia is the first supplier with enough spare capacity to meet an extreme surge in demand,” said Giacomo Masato, a meteorologist at Marex Spectron. 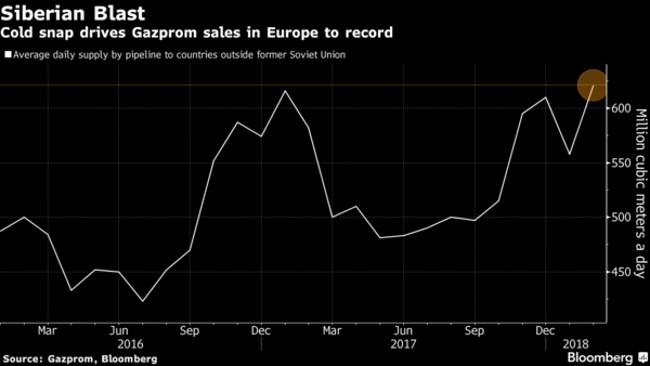 No other country has the capacity to match Russia’s supply. In Norway, some of its facilities including the Kollsnes gas plant were curtailed by outages during the peak of the crisis on Thursday.

Consumers dipped into gas storage tanks in Germany at record rates to satisfy a surge in demand, according to research from Bloomberg New Energy Finance. Much of that gas originates in Russia, and Germany boosted imports from the east during the crisis.

“With little headroom to increase withdrawals from short-term storage sites, prices had to rise to attract imports from the continental hubs, which were themselves undergoing stress,” John Twomey, an analyst at BNEF, wrote in a note.

The supply crunch sent prices spiraling. In Britain, which is the second-biggest gas consumer in Europe after Germany, prompt delivery prices reached a record.

Shipments surged from two pipelines linking mainland Europe and the U.K. Increased supplies prompted the grid to declare the shortage had eased, and it withdrew its “deficit warning” on Friday morning.

While temperatures are expected to turn milder in much of western Europe next week, northern parts of the continent are forecast to remain colder than normal. Britain is facing snow, travel disruptions and high winds as Storm Emma followed a blast of Arctic air from Siberia.

Russia, which shipped some $38 billion of gas to its most lucrative markets in Europe last year, has diminished thoughts that other suppliers could ensure supplies in Europe anytime soon. Possible future competition might come from giant producing fields in the Caspian Sea region, northern Africa and from liquefied natural gas cargoes. So far, Gazprom’s analysis has been correct, allowing the company to boost its market share in Europe.

“The whole situation will be pretty positive for Russia as the cold weather will draw down on storage levels, which are currently at five year lows,” said Christopher Haines, Head Of Oil & Gas, BMI Research. “This should lead to another year of strong gas demand from Europe.”
Source: Bloomberg