In recent days the shipping industry is facing severe challenges with uncertainty on the threat of a ban on Russian exports. The U.S. has eventually officially announced the decision of banning Russian oil imports and the reaction of Russia came later with the Russian President imposing a ban on commodity exports.The ban is said to include Russian oil, liquefied natural gas and coal, while it seems that the U.S. can support such decision as the the Russian oil accounted for only about 3% of the crude shipments that arrived in the U.S. last year.

Western sanctions led Russia to respond with export bans on specific commodity categories till the end of 2022. The embargo includes exports of telecoms, medical, vehicle, agricultural, electrical equipment and some forestry products such as timber. The ministry mentioned that the bans are imposed on countries that have proceeded with unfriendly actions aiming at the disruption of key sectors of the Russian economy. The last few days news emerged that Russia is going temporarily to ban exports to the Former Soviet Union, while it is gradually recommencing wheat exports from its Black Sea ports but navigation in the Azov Sea remains restricted.

Using the Signal Ocean platform data, we are digging into the volume of Russian exports to examine the percentage of influence on each vessel size category in the dry bulk and tanker segments. The current outlook weighs on specific vessel sizes which are significantly influenced by the agricultural and oil exports from Russian key port hubs that could impact the flow of cargo quantities and the evolution of spot freight rates.

In the graph 1, we can see that Handysize vessel size is the most exposed with Russian-Ukraine tensions injecting worries about the future development of agricultural supplies. The Russian exports account for 7% of the seaborne exported volumes by Handysize vessels, which also implies the importance of wheat exports on smaller dry bulk vessels. The next vessel size is the Panamax and post Panamax with Russian coal exported volumes playing a major role on the seaborne demand transportation for bigger vessel sizes. 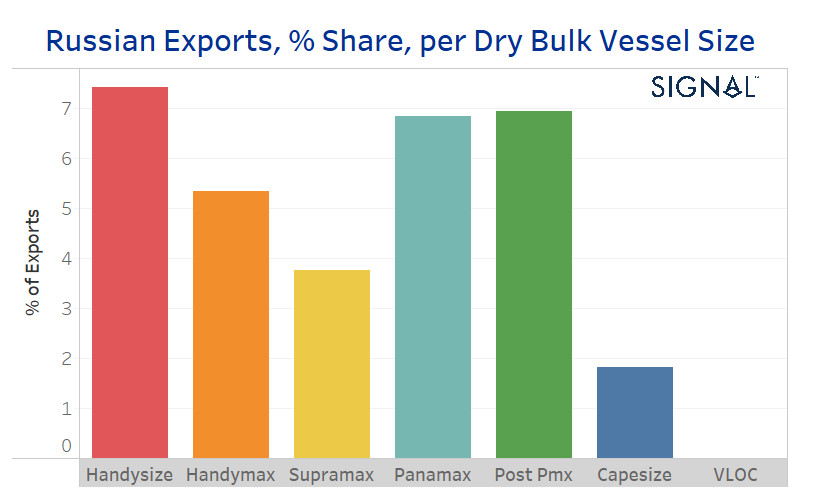 In the iron ore market, the minor role of the Russian economy on iron ore exports is being reflected in the Capesize segment with only a 2% share in the previous year (Graph 1). In addition, the very large ore carriers, as expected, are not at all impacted by the dynamics of Russian exports, where we see the iron ore mining investments from Australia and Brazil having tremendous effects on the euphoria of rates given the ongoing Chinese economic stimulus package.

It is noteworthy to mention that despite the weak effect of Russian iron ore exports on seaborne iron ore transportation, there are some concerns for the future supplies. Russia and Ukraine may not be main iron ore exporters, however, they are supplying the steelmaking ingredient to other European countries, thus the war tensions will eventually dampen the amount of exports from Russia, Ukraine towards Europe. There are concerns for a tightness in the European iron ore supply that may push further upwards iron ore prices as the situation prolongs and the levels of iron ore exports are gradually decreasing.

Impact on the Dry Freight Market – Supramax and Handysize Vessel Sizes of remarkable rise
Dry bulk rates for the smaller ship sizes, Handysize NOPAC-FE and Supramax China-Waf recorded significant increase from February 28th till today (Graph 2). We see Handysize NOPAC-FE rates at levels around $70/t and Supramax China-Wafr excess $90/t. There is also a notable increase in the Panamax Cont-FEast route as intense concerns on a potential coal supply shortage has triggered more demand towards the Far East. In the Capesize segment, the upturn of freight rates appears softer, while it seems that iron ore carriers are not severely influenced by the ongoing geopolitical uncertainties.

The Russian and Ukraine grain markets as leading wheat exporters have already started to change the world seaborne transportation scene. The geopolitical picture has sparked fears on grain food suppliers that have led Middle East and North African countries to seek alternative sources instead of Russian-Ukraine wheat exported volumes. Overall, the Black Sea and Mediterranean grain market supplies not only the Middle East-North Africa, but even more China. Last month, China announced that it is not going to impose restrictions on Russian wheat imports, while it has started to buy corn and soybean from the U.S. to avert future supply shortages.

The threat on air for the future evolution of dry bulk freight rates on specific grain sea trading routes is the port of Odessa. We are all aware of the strategic importance of Odessa as Ukraine’s main Black Sea port, and is one of high value for the seaborne exports to MENA countries. Looking ahead it appears that Supramax China-WAfr and Handysize NOPAC-FE freight rates will continue an upward trend as geopolitical tensions prolong.

Tanker – Vessel Sizes with the highest percentage of influence from Russian exports
The MR1 vessel size in the first top, dirty and clean cargoes (Graph 3) 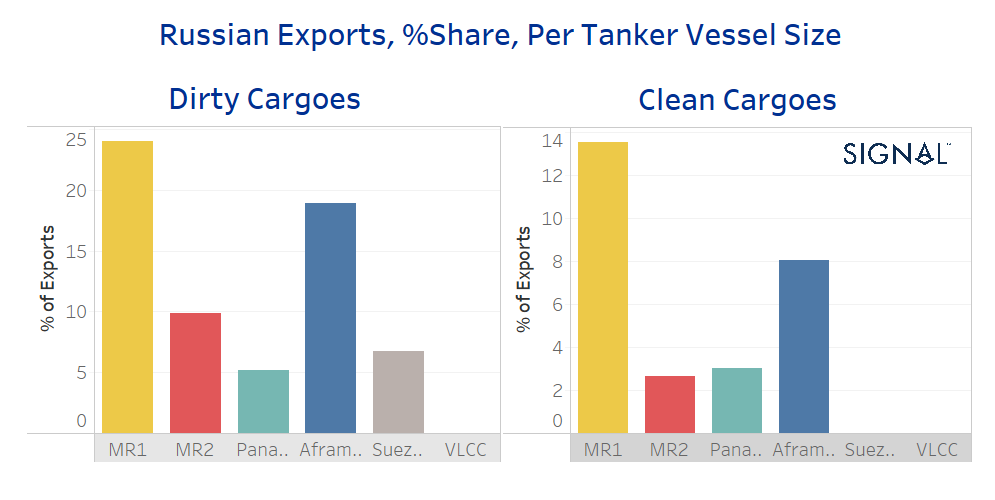 The worries for the future security of Russian oil supplies are increasing as there are not yet guarantees how the ongoing conflict will damage the existing inventories and production. The IEA recently calculated a potential loss of around 3mil barrels per day of Russian crude and refined products from April that could spur another round of volatility in oil prices and dampen world demand.

Impact on the Tanker Freight Market – Dirty and clean rates on the Baltic Sea of remarkable rise
The impact of the geopolitical uncertainty from the ongoing conflicts and fears on oil supply losses from the Russian market have soared dirty and clean WS freight rates to astonishing levels within the first two weeks of March (Graph 4). It is noteworthy that the evolution of rates have reached levels not seen ever before over the last five years. In the Aframax segment, Baltic WS rates exceeded WS500 and Suez BalticSea-Mediterranean rates neared WS300. However, the last few days we have seen a drop in the escalation of Aframax Baltic WS rates, but they still remain excessively higher with the European Union being in uncertainty for the replacement of Russian oil supplies.

In the clean segment, for the Baltic to Continent route, MR1 vessel size records almost the same surprising picture with the dirty Baltic routes, and it is interesting to see WS rates hovering above of Suezmax WS rates, almost at WS400.

What’s Next ? Freight Market – Oil Prices
As the days are passing the possibility for an ending round of talks between Russia and Ukraine has started to ease the jump of freight rates, but with holding uncertainty for the future. We have lately seen a downward correction of Brent crude oil price below $100/bbl on the hopes that Saudi Arabia and UAE could boost oil production to tackle the rising costs.

It is undeniable that the Russian market has played a major role in the influence of dry and tanker freight rates following the ending of February, of significant magnitude in both markets. In the dry bulk market, freight rates on major sea grain trading routes seem to continue their increase with China, West Africa and Middle Eastern countries having the lead of impact on this evolution. In the tanker segment, there is a calm down of sentiment but still WS freight rates are surprisingly high.

The second half of March comes with a loss of optimism that ongoing tensions could eventually come to an end. Despite the hopes for a fresh round of discussions, there are limited potentials for a possible room of compromise in talks between Russia and Ukraine, and patience is still needed for a reaching agreement. In the short term, it seems that we have already reached the up floor on commodity prices and freight rates on strategic trading routes, (Baltic, Black Sea, Med seas) and the first quarter of the year will end by opening a new chapter for the future of the energy, grain markets and shipping freight market with shifting trends on commodity flows for grain and crude/product oil exports/imports.
Source: The Signal Group, By Maria Bertzeletou https://www.thesignalgroup.com/newsroom/russian-ukraine-crisis-thoughts-on-russian-ban-export