European steelmakers need to reconsider their decarbonization strategies because of rising natural-gas and electricity prices, as well as potential limitations on the natural-gas supply.

Over the past two years, nearly all European flat-steel players have announced the gradual replacement of their coking-coal-based blast furnaces (BFs) with direct-reduced-iron (DRI) plants to decarbonize their steel production. The more than 16 DRI plants currently announced represent more than 25 million metric tons1 of capacity.

For many of the newly built DRI plants, the initial intention was to use natural gas (NG) as the feedstock or reducing agent to process ore into pig iron in an electric arc furnace (EAF) or submerged arc furnace. The iron would then be used in a basic oxygen furnace (BOF) to produce flat steel. 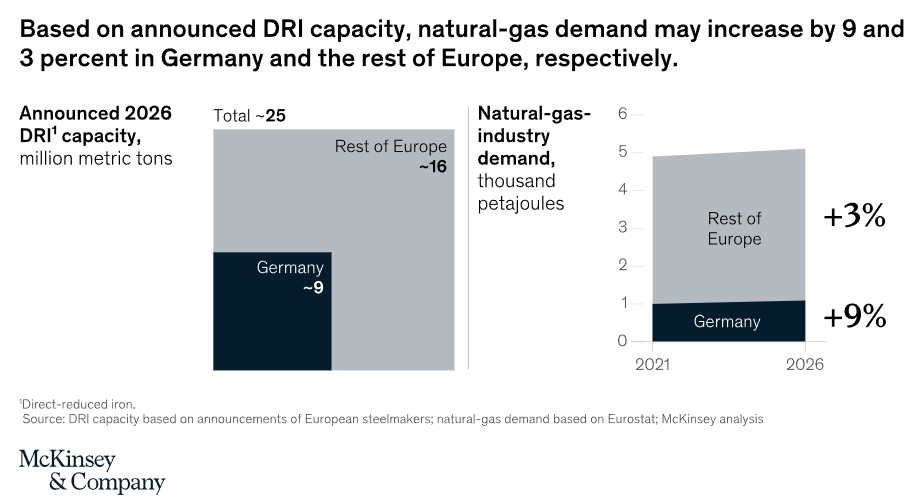 Taking Germany as an example, the announced DRI plants would almost double demand for NG currently used in the iron and steel industry to around 175 petajoules (PJ), from around 120 PJ (approximate demand in Germany, 2020), assuming that announced DRI plants in Germany run on 100 percent NG when they start production in around 2026. A single, large DRI unit of two million metric tons would consume roughly one-fifth of the NG currently used across Germany’s entire iron and steel industry (approximately 20 PJ) and increase industrial NG demand in Germany by around 2 percent.

Looking ahead, NG-based DRI plants can be converted relatively easily to run on H2 (green hydrogen)—when available in sufficient volumes and at competitive cost—to enable a further substantial CO2 reduction that would allow flat-steel players to achieve CO2 footprints below 0.6 metric tons of CO2 per metric ton of flat steel. DRI plants are thus critical for European steel players to reach their carbon-neutrality targets.

Availability and price of energy carries across Europe

The invasion of Ukraine in February 2022 is having deep human, as well as social and economic, impact across countries and sectors. The implications of the invasion are rapidly evolving and inherently uncertain. So far, the invasion of Ukraine has created additional considerations for those European steel players planning investment into the buildup of an NG–DRI production route. Particularly in extended disruption (scenario two) and significant disruption (scenario three) situations, as described in McKinsey’s article on the war in Ukraine, steelmakers could see continued impact of the following conditions:

• potential limitations on NG supply caused by interruption of Russian exports (currently responsible for some 35 percent of the NG supply in Europe), with some countries, such as Germany, having a higher reliance on imported Russian NG at around 65 percent (Exhibit 3)
• substantially increased electricity prices, to €0.36 per kilowatt-hour (average in Germany, March 2022), from €0.05 per kilowatt-hour (average in Germany, 2019–21) 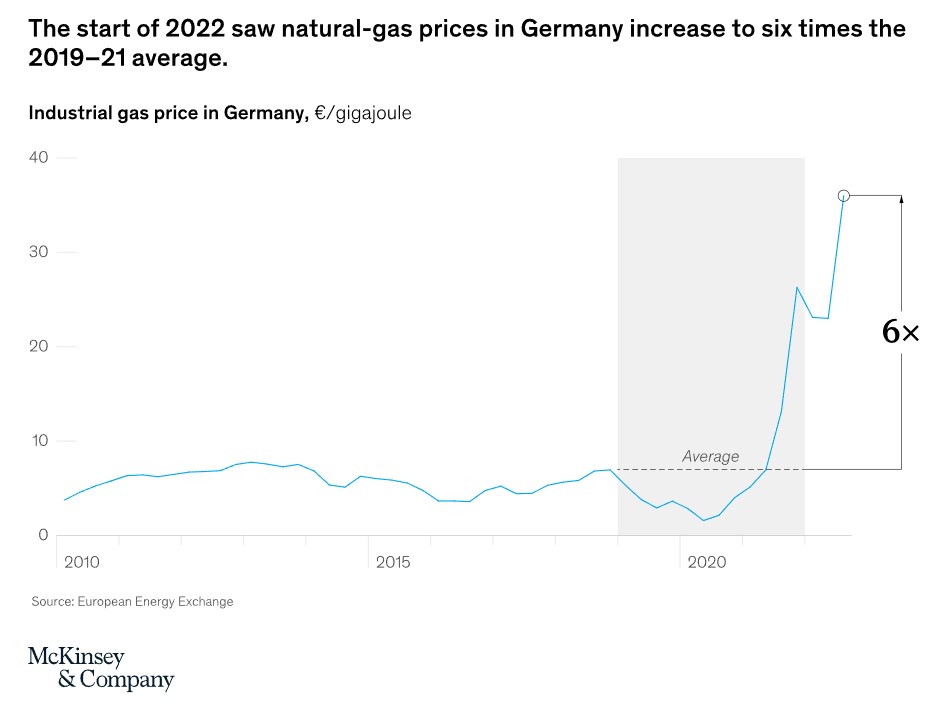 In addition, coking coal prices rising to above €500 per metric ton (average hard coking coal price in Europe, March 2022), from €170 per metric ton (2019–21) for the traditional BF–BOF route. Together, these factors mean that the feasibility, timeline, and competitiveness of NG DRI investments need to be reassessed, acknowledging the impact on the decarbonization road map and ability to reach CO2-reduction targets set out by steel players. 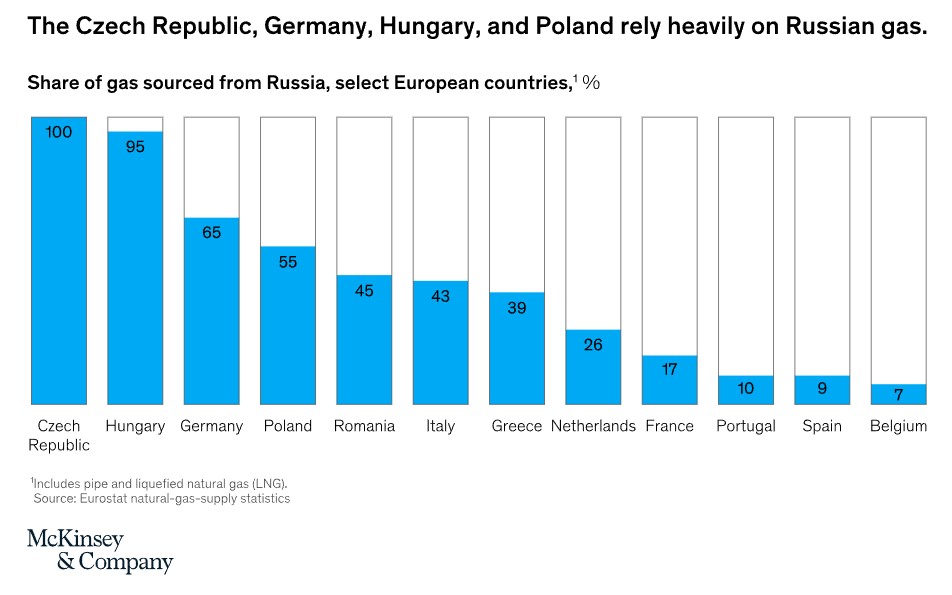 Potential industry and ecosystem responses
We currently see four potential scenarios for the impact on the buildup of DRI plants:

• Scenario A: transition slowdown—postpone investment and focus on incremental decarbonization of existing assets. Postponement of DRI investments and conversions of BF to DRI plants could occur because of increased difficulty in securing sufficient supply and competitive prices for NG. The dependence of other industries (such as chemicals and food) on NG and limited alternative feedstock sources could lead to postponed buildup of DRI plants and extension of BF life spans with further relinings, alongside incremental CO2 abatement via alternative measures, such as operational and CO2 efficiency improvements in coking batteries, BFs, and downstream rolling assets.
• Scenario B: transition acceleration—jump to H2. Buildup of DRI plants using H2 as of day one—that is, relinquishing NG as a transition feedstock and directly focusing on utilization of green H2—could be accelerated. The relative competitiveness boost for H2 versus NG as a feedstock, in combination with the clear target for energy independence consistent with a sustained policy shift (scenario one from McKinsey’s article on the war in Ukraine), could hasten the shift toward H2-based DRI plants. Thus, sufficient supply and competitive prices of H2 could become the critical timing factor. That could make H2 availability and sourcing the key prerequisite for decarbonization of the steel industry in Europe right from the start.
• Scenario C: transition shift—move to resurrecting carbon capture usage and storage (CCUS). There could be a shift away from DRI investments as a means to decarbonize, with increased investments in alternative decarbonization technologies, such as carbon capture usage and storage (CCUS). Supply constraints in feedstock for DRI plants could lead steel players to extend CCUS, which would also allow a considerable CO2 reduction, although this approach has been attracting less interest because of public antipathy to CCUS and limited customer acceptance.
• Scenario D: transition shift—move from primary to circular steel. There could be a shift away from investments in DRI to investments in scrap-fed EAF setups, heralding a noteworthy reduction of primary steelmaking capacity in Europe. With the European market historically being oversupplied and technological developments allowing higher steel grades to be made from increased scrap content, several players could opt to transition a large part of production fully to circular, scrap-based steelmaking.

For scenario B, gaining timely access to sufficient H2 supplies would be the key success factor. The German flat-steel industry would need more than 14 terawatt-hours of green H2 in 2026 to substitute for the planned NG. In Europe, that number would increase to more than 32 terawatt-hours of green H2, which is likely to be challenging—it corresponds to around 66 percent of announced electrolyzer capacity in Europe.2 This would mean that flat-steel players would need to double down on the sourcing of limited H2 while carrying out the required infrastructure buildup and potentially to accept a trade-off in securing supply versus the cost competitiveness of green H2. Some Nordic steel players, such as H2 Green Steel, have already been focusing on using H2 as the feedstock of choice for their newly built DRI plants. Securing early access to green H2 gets even more important now, with it being the one direct alternative to NG.

When examining the cost competitiveness of the NG–DRI–EAF, H2–DRI–EAF, and BF–BOF routes at different NG and CO2 prices, the H2–DRI–EAF path is already cost competitive at a NG price of €15 per GJ and a CO2 price of €100 per metric ton (Exhibit 4). The calculations are based on an H2 price of around €3 per kilogram, which industry experts indicate is a possible forecast for 2025 and later. The timeline for cost-competitive green steel using green H2 might shift forward and lead to a potential skip of NG as reducing agent.

With scenario C, the applicability for steel players will likely depend on two factors: customer acceptance for green steel based on CCUS and capital-expenditure efficiency to enable financial payback of investments within the likely limited window of customer acceptance. Our first estimates suggest that a CCUS investment would require a minimum time frame of five to ten years to support the required massive investments in this technology. However, it takes time to align stakeholders and obtain the required permits.

Whether a jump to H2 or a resurrection of CCUS would be better to safeguard the decarbonization of European steel players will depend on further development and the terms of trade of key market, technology, and cost parameters. These include the supply of NG from Russia into Europe, NG prices, government interventions (such as subsidies), and CO2 targets, and they likely vary from plant to plant. Although the NG market might balance out again in availability and price, the whole steelmaking industry now needs to take a step back and adjust its decarbonization strategies.
Source: McKinsey & Company