Sales success for the Hamburg Office of EST-Floattech

Dutch marine battery designer and manufacturer EST-Floattech opened a dedicated German office in Hamburg in August 2021. Staffed with two sales managers and a technical project manager, this decision is now really paying off: its sustainable, safe and reliable battery solutions are in demand in Europe and also in Asia. In addition to inland waterways and government projects, the first of several upcoming orders for offshore wind vessels has now been placed.

Offshore Wind contract
Less than a year after its opening, the Hamburg office of the Dutch technology company EST-Floattech can celebrate a success: at the beginning of June 2022, a customer from Southeast Asia ordered the delivery of a battery pack for an offshore wind support vessel. “Of course, I am very pleased that the founding of the Hamburg company is paying off so quickly,” emphasizes Marc Mühlenbeck, Sales Account Manager. “Further orders are about to be signed.”

Germany, DACH, Poland, Denmark, Italy, Southeast Asia
This order is just one example of how EST-Floattech has established itself in the market. Since its foundation in 2009 in the Netherlands, the company has grown continuously and is one of the leading suppliers of lithium-polymer battery systems. The number of customers and projects has increased significantly in recent years, which is why ‘EST-Floattech GmbH’ was founded in August 2021. Working in the Kallmorgen Tower, which is located in the immediate vicinity of Hamburg’s ‘HafenCity’, Josefin Klindt and Marc Mühlenbeck (sales) and technical project manager Frank Gawehns are combining their experience for these projects. The team looks after the German-speaking market, incl. the DACH region. The Italian, Polish, Danish and Southeast Asian markets will also be served from Hamburg, showing the current diversity and growth in hybrid and electric propulsion needs. All other countries are served from the Dutch HQ. 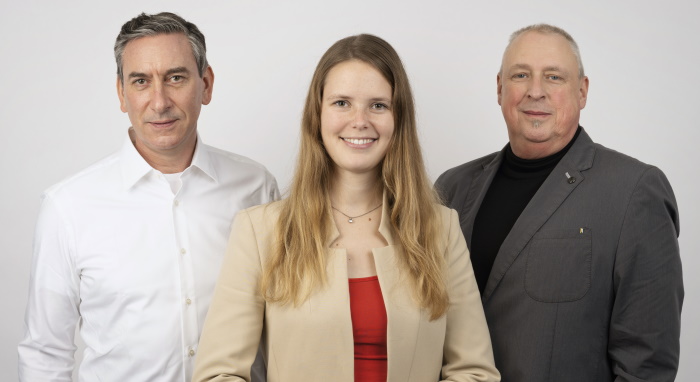 The Team
As a former shipping clerk with experience in a shipping company and as deputy sales manager for a battery manufacturer, Josefin Klindt can contribute her expertise: “With my experience in the maritime economy and the knowledge of the possible uses of battery technologies, I can personally contribute to supporting the energy transition at sea,” emphasizes the Sales Account Manager. Her colleague Marc Mühlenbeck draws on his experience and know-how from 20 years in the maritime industry, including shipbuilding, offshore and ship supply.

“The potential for our sustainable, safe and reliable battery solutions is huge,” emphasizes Josefin Klindt. “After all, environmental and climate protection is becoming increasingly important, which affects both the need for new technologies and even the public image of companies, and environmental regulations are also becoming ever stricter.” In addition, the diverse funding options for sustainable propulsion systems from the EU and German federal and state governments stimulate ship owners to choose for hybrid or zero-emission newbuilds.

Projects
EST-Floattech’s more than 200 projects worldwide, including in Germany, include the zero-emission ferry operated by SFK (Kiel), which has been in operation since 2021, and numerous river cruise ships operated by Viking. Customers and crew of the two fire-fighting boats ‘Dresden’ and ‘Hamburg’ of the Hamburg fleet are also satisfied with the battery system from EST-Floattech after more than 200 days in operation. Last, but not least, there’s the Elektra, the first-ever hydrogen propelled pusher, sailing either in hydrogen-electric or full electric mode.

Battery systems
In addition to the proven and already widely used battery module ‘Green Orca 1050’, certified by DNV and also complying with the BinSchUO and ES-TRIN rules, the High Energy NMC, High Power NMC and High Energy LFP of the new OCTOPUS series are almost ready for deployment. In close collaboration with system integrators, shipyards, design agencies and engine suppliers, the team is committed to further growth, both as to production and knowledge-sharing, to facilitate its goal of zero-emission shipping.
Source: EST-Floattech