Sanctions from Western countries have weakened the oil and gas construction pipeline in Russia and Eastern Europe, says GlobalData

The sanctions placed on Russia as a result of the Russia-Ukraine conflict has led to a $237.5 billion decline in the Eastern Europe oil and gas project pipeline as restricted access to intermediate goods and international capital have halted the construction of numerous oil and gas projects, says GlobalData, a leading data and analytics company.

Jack Riddleston, Construction Analyst at GlobalData, comments: “These sanctions have weighed heavily on oil and gas project growth in Eastern Europe and caused extensive disruption to activity as countries plan to phase out Russian oil and gas entirely. Projects funded by foreign entities have also had funding pulled and restricted supply chains have forced construction to a halt.”

Based on GlobalData’s analysis of the oil and gas construction projects currently in the pipeline in Eastern Europe, construction spending will reach $33.1 billion in 2023 if all projects go ahead as planned and spending is evenly distributed over the construction stage. However, there are risks to projects progressing in Russia. 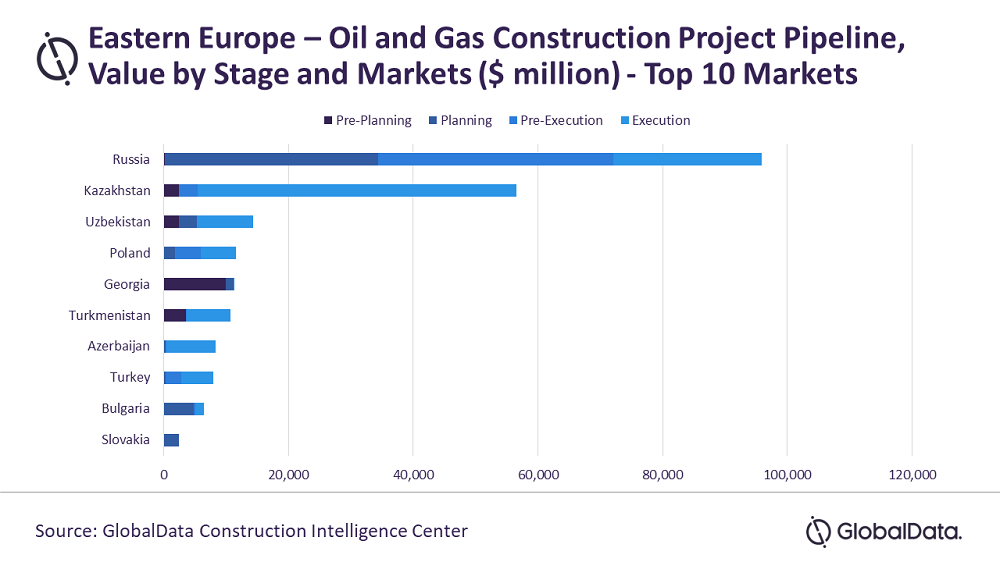 Novatek’s $21 billion liquified natural gas plant, Yamal Arctic 2, is one of many oil and gas projects in Russia that has been put on hold and is currently 60% complete with train 1 at 80% completion and expected to be completed by 2023. However, although headway has been made in the construction of trains 2 and 3, completion remains uncertain as the May 27 deadline for foreign firms to supply Russian projects has passed.

Riddleston adds: “In addition, the ban on imports will likely continue to suffocate upstream project growth in Russia as alienation from the West has driven down Ural crude prices and consequently driven down export revenue. However, as opportunities in the West have diminished, opportunities in the East have opened. As a result, India and China have taken advantage of the discounted prices. India has been on a Ural oil spending spree and China has agreed to a 30-year deal to import natural gas through the Power of Siberia with plans to extend capacity with a new pipeline in North-East China.”
Source: Global Data