A lump of coal is scooped onto a truck bed in Australia, driven to a port, loaded on a ship, piloted across the ocean to a dock in China, piled into a train car and delivered to a power plant. And it would all happen under the watchful eyes of coal traders, if a fleet of new satellite tracking firms can deliver on ambitious promises.

Companies like Ursa Space Systems Inc. and Orbital Insight Inc. are using satellites to try to shed light on tightly held secrets in the commodity trading world, from coal mine productivity to crude oil storage. While doubts remain around the accuracy and consistency of the data, there could come a day when traders can track supply and demand of raw materials, the operations of producers and consumers and even the output of entire economies in near-real time. 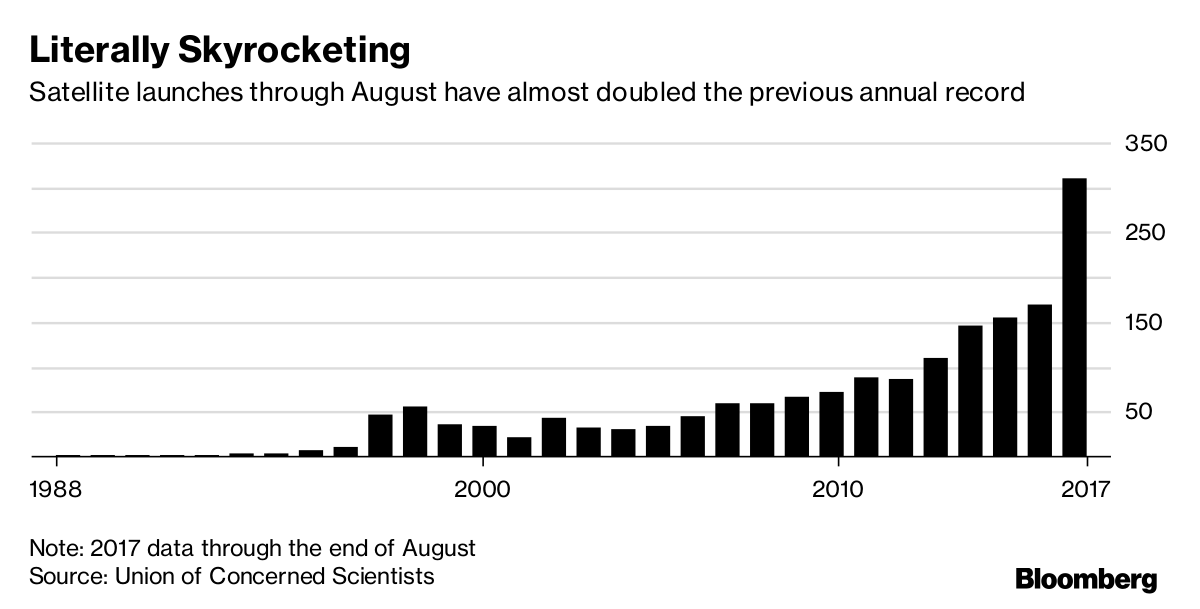 “If you look out a few years, what we see is the ability to objectively track all major supply chains from the point of basic raw material production, whether its farms or mines, all the way through to various steps of refining, whether that’s steel plants or oil refineries or consumption in factories,” Orbital founder James Crawford said by phone.

Merchants and traders for centuries have sought an edge with information. William Shakespeare even tapped into it, with news of wrecked cargoes of spice and silk driving the plot of “The Merchant of Venice.” In more recent years, seamen tracking oil exports used binoculars to count tankers, helicopters with infrared cameras flew over crude storage tanks and pump heat was used to assess pipeline flows.

Satellites are the next step and have already been adopted to measure the depth of shadows on floating roofs of oil storage tanks to estimate how much crude is in them. In the U.S., traders use the data to get an advance peak at changes in crude inventories in the key hub of Cushing, Oklahoma, before weekly government releases of stockpile levels.

Lower costs have allowed companies and governments to launch 310 satellites this year through the end of August, compared to 169 for all of last year, according to the Union of Concerned Scientists. Some of these, from operators like Planet Labs Inc. and Iridium Communications Inc., form low-orbit fleets that can see almost the entire Earth. Firms like Orbital then use artificial intelligence to scan millions of those images and translate them into useful data. 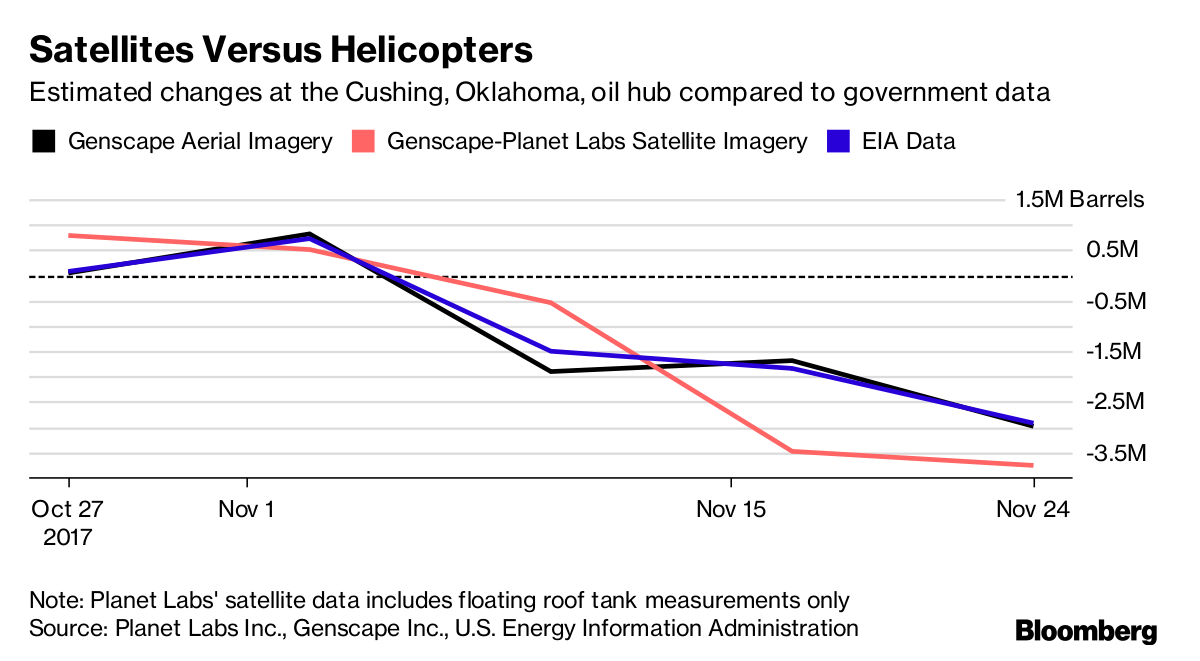 For example, a coal trader may want to know when demand is going to exceed supply, driving up prices. Satellite images could measure the piles of coal outside power plants to see when they’re getting low and need to be refilled. They can count trains and track ocean tankers carrying supplies. They can measure ground levels, pile heights and truck activities at mines to deduce production.

Put it all together and the data could paint a picture of who needs extra coal and who has surplus to sell, in near real-time, giving traders leverage to negotiate sales and purchase agreements and create arbitrage opportunities.

“It’s a trader’s dream,” said Tom James, a Singapore-based partner at energy consultant Navitas Resources. “It’s like having a direct line to the CIA. If it does what it says it can do, it looks pretty amazing.”

“If” is the big question. While satellite data is used to gauge U.S. oil stockpiles, the reliability of the data in other corners of the commodity world is less clear. In China, satellite data can add value because the country doesn’t regularly report strategic petroleum reserve levels, but the technology also has drawbacks, according to Jefferies Group LLC analyst Laban Yu.

“China is building out some amount of underground storage which is invisible to satellites,” Yu said in an email. “I suspect that if China really wanted to, it could paint its tanker roofs black or some weird pattern making the shadow method inaccurate.”

Satellite analysis still needs to prove its accuracy and reliability in order to gain a larger following within the industry, according to analysts at ICIS China and Energy Aspects Ltd. 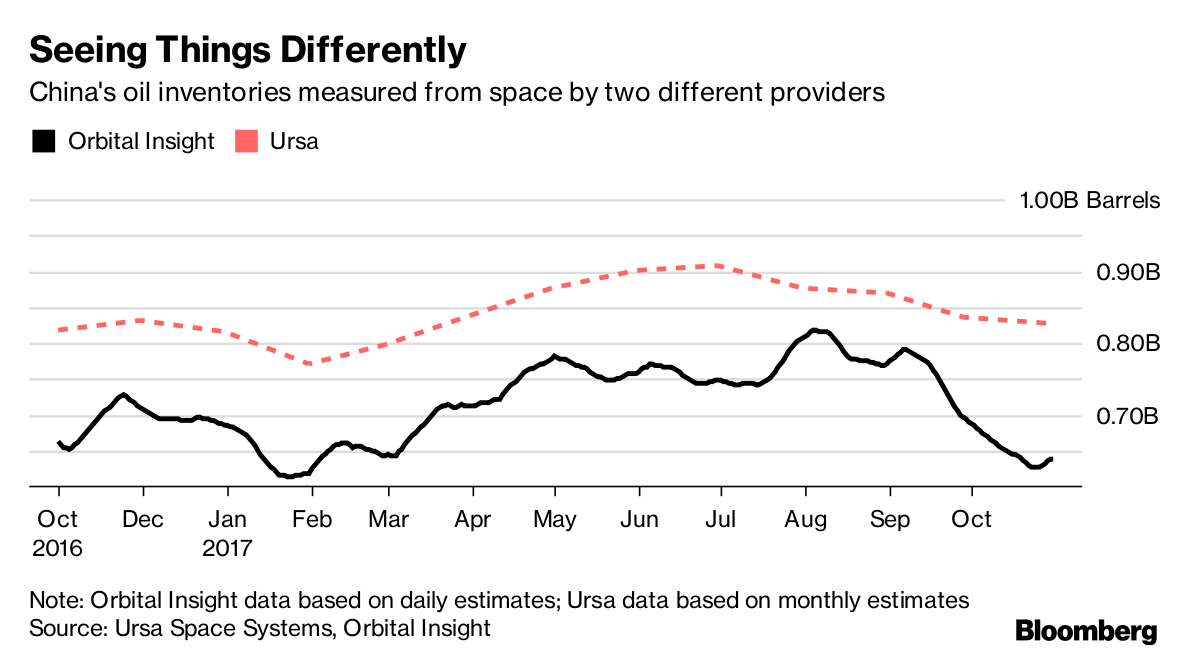 For example, attempts at tracking China crude storage levels—the holy grail for some oil traders—rely on different technologies and methodologies, and offer varying results. Ursa, which uses a technology known as synthetic aperture radar to penetrate clouds, assessed China’s inventories at about 827 million barrels by the end of October. Orbital, which uses a combination of visual satellite data and SAR, estimated they were at 639 million barrels.

Mountain View, California-based Orbital has received past funding from Bloomberg Beta, a venture-capital unit of Bloomberg LP.
And difficulties persist for some commodities like natural gas, which isn’t visible from the air, or the amount of grain in enclosed storage, according to Orbital’s Chief Business Officer Kevin O’Brien.

“You can use geospatial analytics to help establish supply chain links, but it also requires good old-fashioned, hard-core research to facilitate that,” O’Brien said in an interview in Tokyo. “You can’t see inside a silo but you can see the number of trucks parked right next to it.”

Still, the possibilities are exciting. Spire Global Inc., which uses its own satellite constellation system to track the location of ships, followed a handful of vessels off the coast of New England and found their activity, along with water temperatures, may offer a proxy for lobster price fluctuations. San Francisco-based SpaceKnow Inc. measures activity at more than 80 coal mines in China and also has coal indexes for Australia, South Africa, Chile and India.

In some cases satellite imagery analysis may offer more insight than government data, particularly in places where that information comes sporadically or not at all. Barclays Plc analysts citing data from Ursa said in an October report that if satellite findings are accurate and reflect broader activity in the Chinese oil sector, then the nation’s crude demand may be underestimated and the global supply-demand balance is tighter than thought.

“In places like China and India, data can be inaccurate or very slow to come out, so it’s not actionable intelligence,” James said. “Now you’re getting ahead of the curve in terms of when the official data comes out. It’s more than just a level playing field, it’s a global advantage to anyone who’s able to process this data.”
Source: Bloomberg