The service provided by container shipping lines has deteriorated since 2016 and is now seen by exporters, importers and freight forwarders as more problematic, according to the second annual shipper satisfaction survey of Drewry and the European Shippers’ Council (ESC).

The joint ESC and Drewry survey reveals that the 400 shippers and forwarders who took part rated the service of container shipping lines with a score of 3.2 on average on a scale of 1 (very dissatisfied) to 5 (very satisfied).

There were different levels of satisfaction for 16 different carrier activities reviewed in the survey. Satisfaction with documentation accuracy scored 3.4, but quality of customer service received only 2.9 and transit times and reliability of booking/cargo shipped as booked attracted scores of between 2.9 and 3 (see chart).

All the service features, in effect, received a poor or medium level of satisfaction score from customers. 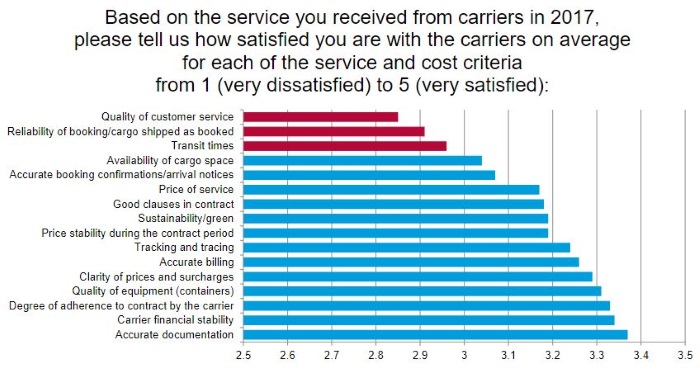 Shippers and forwarders also said that carrier performance has deteriorated between 2016 and 2017 in four areas: the range of different available carriers, the range of different available services, the price of service and the overall carrier service quality. But carrier performance related to sustainability/green and carrier financial stability has improved since 2016, according to customers. 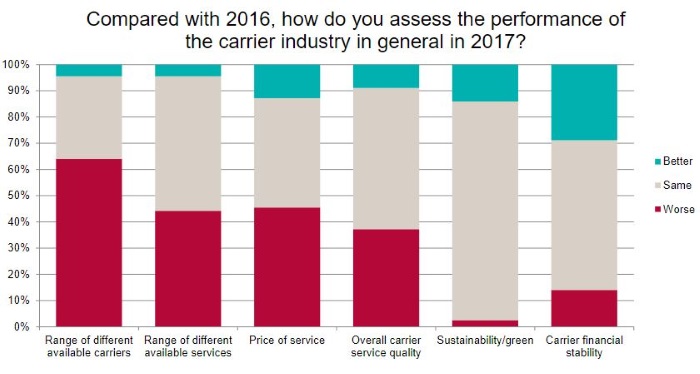 “It is disappointing that, even after the big re-organisation of container services following the start of new alliances, carriers still do not meet the expectations of their customers – on the contrary,” said Nik Delmeire, Secretary General of the European Shippers’ Council.

“At the time of the survey, the carriers’ Emergency Bunker Surcharge, which we regard as customer unfriendly, was not yet in place, and it is reasonable to think that the results of the survey would be worse if it was done now,” he added.

The ESC invites carriers to meet their customers to discuss real operational issues, as already happens successfully in the European rail freight sector, instead of resorting to new cost surcharges.

“Shippers and forwarders want a balance between service quality and price, but the survey shows that carriers are cutting back on service and offering less choice to shippers,” said Philip Damas, head of the logistics practice at Drewry.

To receive a higher level of customer service, some Drewry customers actively avoid direct contracts with ocean carriers and instead deal with forwarders and intermediaries. “These issues make Drewry focus more on the transit times and service levels of providers when we provide benchmarking analytics to beneficial cargo owners,” Damas commented.

The ESC and Drewry gathered satisfaction scores for individual ocean carriers, but they considered that the number of responses was not high enough to justify publicising individual results. The two organisations are calling on industry associations or partners to help scale this initiative to become a large, independent monitoring exercise of service quality by carrier.
Source: Drewry Shipping Consultants Limited

Exotic Fruit To Drive Growth In The Reefer Shipping Trade