Terradepth and The Nippon Foundation-GEBCO Seabed 2030 project have announced a new partnership which will utilize Terradepth’s geospatial data portal known as Absolute Ocean. Seabed 2030 will use Absolute Ocean as a data visualization and exploration tool as part of the international effort to map the entire ocean floor. The announcement was made on the heels of the 2022 United Nations Ocean Conference in Lisbon, Portugal.

Seabed 2030 is a collaborative project between The Nippon Foundation in Japan and the General Bathymetric Chart of the Oceans (GEBCO) with the mission of inspiring 100 per cent mapping of the ocean floor and making it freely available to all by 2030. GEBCO is a joint programme of the International Hydrographic Organization (IHO) and the Intergovernmental Oceanographic
Commission of UNESCO (IOC-UNESCO). Seabed 2030 comprises five Data Centers – four Regional Centers and one Global Center – which are responsible for coordinating and assembling mapping data.

In addition to producing and delivering global GEBCO products, the Seabed 2030 Global Center is also a Trusted Node for receipt of citizen-sourced data in support of IHO’s Crowdsourced Bathymetry (CSB) initiative which encourages government, academic and privately owned vessels, including superyachts and fishing boats, to participate in increasing our knowledge of the ocean by sharing depth measurements from navigation instruments.
Terradepth’s Absolute Ocean portal will provide Seabed 2030 with a secure platform to allow data contributors to visualize their contributions in an interactive way, and explore how they relate to other open-source data in the platform.
“Our Absolute Ocean platform will enable Seabed 2030 to expand their ocean data management and outreach efforts to a global audience of explorers, researchers, educators, and ocean enthusiasts, without requiring subject matter expertise to explore or interpret the data” said Jason Schwartz, Terradepth Vice President of Corporate Development.

Seabed 2030 will process CSB data for onward contribution to IHO’s Data Center for Digital Bathymetry (DCDB). Seabed 2030’s recent partnership with the International SeaKeepers Society will provide some of the first potential users of the platform with custom data loggers being operated by ocean-going vessels to capture georeferenced bathymetric points during their travels. 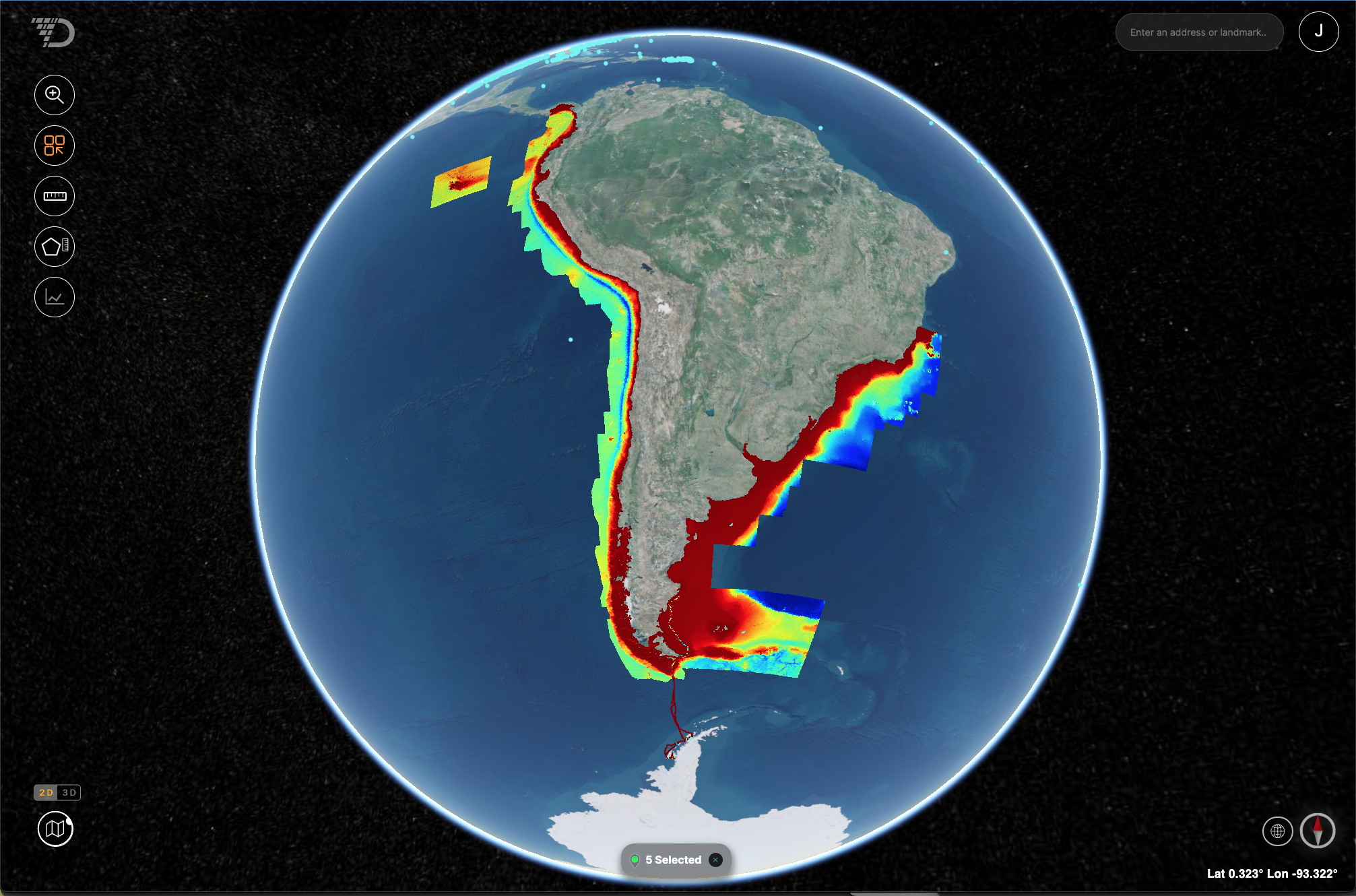 Screenshot of data collected off Antarctica (route transit depicted from South America to Antarctica and back) as part of the International Hydrographic Organization’s Crowdsourced Bathymetry (CSB) initiative. Depicted for the Seabed 2030 Global Center within Terradepth’s Absolute Ocean portal. Additional bathymetry off South America made available by third-parties and visible in Absolute Ocean

“Our partnership with Terradepth will greatly enhance the work we do to support IHO’s CSB initiative, which is a fundamental strand of Seabed 2030’s mission,” commented Dr Helen Snaith, Head of Seabed 2030’s Global Center. “The Global Center are excited to use the Absolute Ocean platform as an invaluable tool bringing us one step closer to completing the puzzle of the
world’s seabed.”

Absolute Ocean is a browser-based portal for the storage, discovery, and sharing of Trusted Node data as well as data collected by other third-parties. Terradepth developed Absolute Ocean as a cloud-based ocean information management platform where layers of marine data can be studied using the power of Machine Learning technology. Powerful visualization and analysis functions allow users to examine seafloor data in 2D and 3D from a variety of perspectives, scales, and time periods, increasing operational efficiency and the quality control process.

Terradepth will roll out the commercial version of Absolute Ocean in summer 2022 with multiple subscription levels. Clients will be able to load their own geospatial marine data sets onto the secure platform as well as access the thousands of ocean data files currently included in the platform database – side-scan sonar, synthetic aperture sonar, multibeam bathymetry, satellite-derived bathymetry, LiDAR, sub-bottom profiles, magnetometer readings, and satellite imagery.