Seaborne coal trade was one of the major “losers” of 2020, as total loadings fell significantly as a result of lower demand. In a recent weekly report, shipbroker Banchero Costa said that “2020 proved to be a truly terrible year for seaborne coal trade. Total loadings in the 12 months of 2020 were down -12.7% year-on-year to 1130 million tonnes, according to vessels tracking data from Refinitiv. Despite all the global talk about “going green” and “fight on carbon”, coal trade was still growing strongly until 2019. It expanded by +2.5% in 2019 and by +3.2% in 2018. However, Covid-19 and its associated lockdowns proved a body blow”. 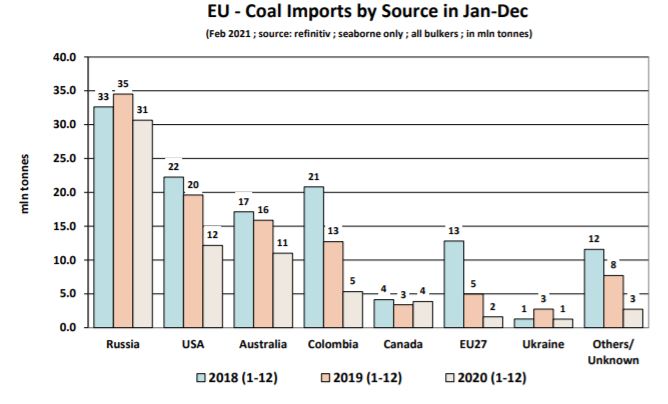 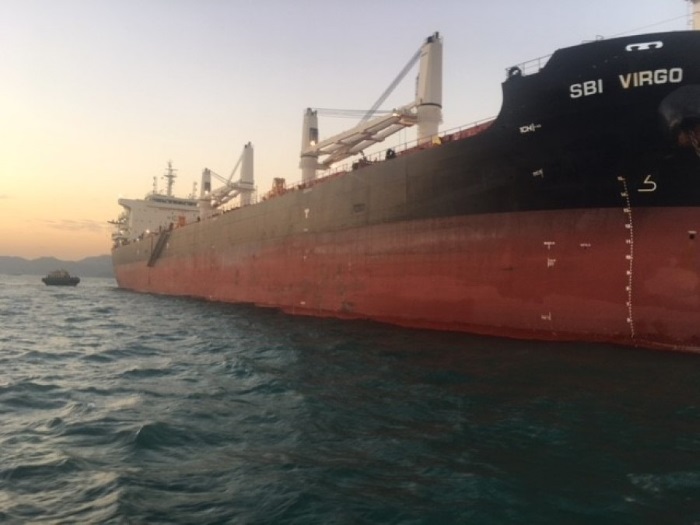 It added that “coal shipments into the EU were hit particularly hard in the first half of the year, and improved somewhat in the final quarter. In the first 3 months of 2020, the EU imported 17.6 mln tonnes of seaborne coal, down -42.8% y-o-y. The winter period was traditionally the strongest period of the year, driven by heating requirements. The second quarter of 2020 saw shipments of 15.5 mln tonnes into the EU, down -39.5% y-o-y. In the third quarter, imports improved marginally to 16.1 mln tonnes, which was down -27.3% y-o-y from the same quarter in 2019. The fourth quarter of 2020 saw the best volumes of the year, jumping to 19.3 mln tonnes, but this was still down -15.4% on a year-on-year basis. We now expect arrivals in Jan-Feb period of 2021 to reach 13.0 mln tonnes, which would be a +3.4% y-o-y improvement on the same two-month period last year. In terms of sources of the shipments, things didn’t change too much. Arrivals from Russia proved most resilient, declining by -11.2% y-o-y to 30.7 mln tonnes in 2020. Russia remains by far the top supplier of seaborne coal to the EU, accounting for 44.7% of volumes in 2020. The vast majority of Russian coal shipments to Europe are loaded at Baltic (Gulf of Finland) ports. 58% of last year’s cargoes were shipped from the port of Ust-Luga, and 7% from Vysotsk. Outside the Baltic Sea, about 25% of volumes were shipped from the northern port of Murmansk, and about 6% were loaded in the Black Sea port of Novorossiysk”, Banchero Costa noted. 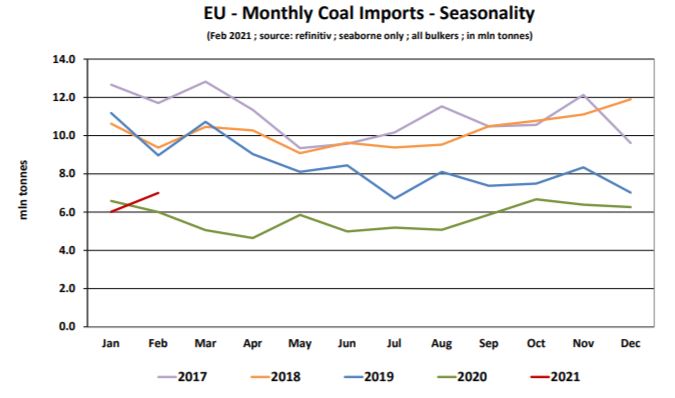 “After Russia, the second largest exporter of coal to Europe is the USA. Shipments from the USA to the EU were down -38.0% y-o-y to 12.1 mln tonnes in 2020, with a share of 17.7% of Europe’s seaborne coal imports. Imports from Australia were down -30.6% y-o-y to 11.0 mln tonnes. Shipments from Colombia to the EU plunged by -58.1% y-o-y to 5.3 mln tonnes. Imports from other EU countries crashed by -67.7% y-o-y to 1.6 mln tonnes. Volumes are also down by -87.5% from the 12.8 mln tonnes of 2018. This is largely due to Russia diverting cargoes from Latvian ports to its own Baltic ports like Ust-Luga”, the shipbroker concluded.
Nikos Roussanoglou, Hellenic Shipping News Worldwide