Demand for second hand bulkers has been strong, on the back of a strong freight market. However, deals are hard to conclude with sellers reluctant to let go of their assets in current pricing. In its latest weekly report, shipbroker Banchero Costa said that “in the dry bulk segment, with the ongoing spike in the Capesize market, few units were sold and many were under negotiations. ‘Great Challenger’ 176,000 dwt built in 2005 at Universal was sold to Chinese buyers for $11.3 mln. The older ‘Alpha Era’ 171,000 dwt built in 2000 at Sasebo was sold to Fujian Ocean Shipping, China at a price of $7.75 mln, achieving some 10% of her demo value. Nisshin Shipping offloaded another Kamsarmax, this time it was the resale hull n 10940 from Oshima at a price of $29 mln to Greek Buyers. Other Greek buyers purchased the Panamax bulker ‘Harrow’ 76,000 dwt built in 2005 at Sasebo for $8.6 mln. In the wet segment, the interest for tankers significantly lowered and expectations for asset prices went down. During the week an older Suezmax MT SANDRO 160,000 dwt built in 2000 at Daewoo was sold at $13 mln: the price was definitely softer than recent done; it reflected the change in the market freight and that the vessel will have SS/DD due in July. A Maersk Handysize tanker ‘Maersk Rosyth’ 34,000 dwt built in 2003 at GSI changed hands for $7.2 mln but buyers remained undisclosed”, the shipbroker said.

In a separate note this week, Allied Shipbroking added that “on the dry bulk side, it was another week with a fair number of transactions taking place, a fact that reflects the sentiment improvement noted amongst potential buyers. The confidence boost that derived from the impressive rally noted in the freight market has pushed several in search of new buying opportunities. Last week, we witnessed an increased focus in the Panamax/Kamsarmax segment, but deals were reported across all other size segments as well. The increase in buying interest is expected to resume this coming week, partially helped by the current price levels being seen. On the tanker side, things are quite different, as the recent slump in earnings has trimmed appetite amongst buyers. The current situation has let most potential buyers to take a step back, awaiting for a better picture to take shape in terms of earnings and clear direction before proceeding with any new offers. Last week, we witnessed just one transaction, which was the sale of a vintage MR unit”, the shipbroker noted. 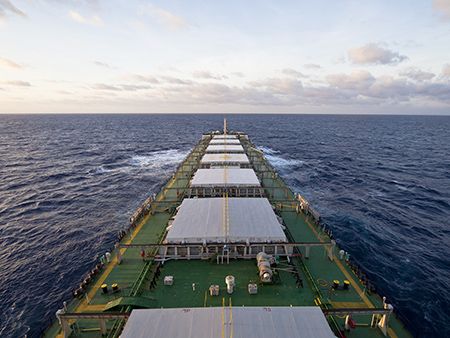 Meanwhile, in a separate note this week, Banchero Costa said on the newbuilding market that it was “not a particularly active week in terms of newbuilding orders, especially in the wet segment which was very quiet. The Danish company NORDEN commissioned to NACKS the construction of 4 x 61,000 dwt Ultramax units: the price was not disclosed and delivery will take place in 2022. Japanese shipyards received multiple orders for bulk carriers, but a significant part of them might be domestic or for speculation purpose. N.Y.K. Line placed an order at Oshima for 1 x 59,000 dwt wood chip carrier. Namura will build 1 x 181,500 dwt Bulk Carrier for an undisclosed account. Again Namura will build 1 x 303,000 dwt VLCC, direction was not known. No named buyer again was behind the order of 1 x 90,000 dwt BC at Oshima. Same story with Shin Kochi which will build 2 x 37,900 dwt Handysize units for undisclosed account. To conclude, another Japanese yard, this time Shin Kurushima, received an order for 1 x 63,800 dwt Ultramax. As for the above units, buyers were not identified yet”.

Allied Shipbroking added that “uncertainty regarding the global economy is still affecting buying appetite in the newbuilding market, while the current situation noted in terms of freight earnings has also played a pivotal role on the level of activity being witnessed. In the dry bulk market, having viewed a remarkable recovery in freight rates across the whole spectrum of size classes, has helped enhance sentiment amongst buyers right now. This has as a result pushed for a fair rise in enquiries being seen by shipbuilders as of late and a gradual return in activity being noted. Last week we witnessed an impressive order of 5 Ultramax units, a sign pointing to this very upturn being seen as of late in appetite and sentiment. In contrast, the tanker market has been relatively uninspiring as of late, with rates having shown a fair correction over the past month, adding second thoughts to most who would have previously considered undertaking a newbuilding project at this point. However, given that fundamentals are not yet justifying a continuous slide in freight earnings, we expect a ramp up to be seen sooner or later in activity”, the shipbroker concluded.
Nikos Roussanoglou, Hellenic Shipping News Worldwide