Significant changes across various corporate sectors in the past 20 years have led to a drastic reduction of issuers rated in the ‘AAA’ and ‘AA’ categories, Fitch Ratings says. Industries where issuers still achieve high investment-grade ratings are not immune to future challenges, but these differ by the expected level of disruption and intensity and, ultimately, the impact on credit risk.

Since 2001, the number of ‘AA’ or ‘AAA’ Fitch-rated issuers (jointly referred to as ‘AA or above’ category) has fallen to 10 from close to 50. The sector mix has also shrunk considerably and is now limited to a few industries, pharma and oil and gas in particular. Many downgrades were caused by fundamental changes in the underlying business environments, mostly due to increased competition and technological changes. However, downgrades were also driven by financial policy decisions to increase leverage. 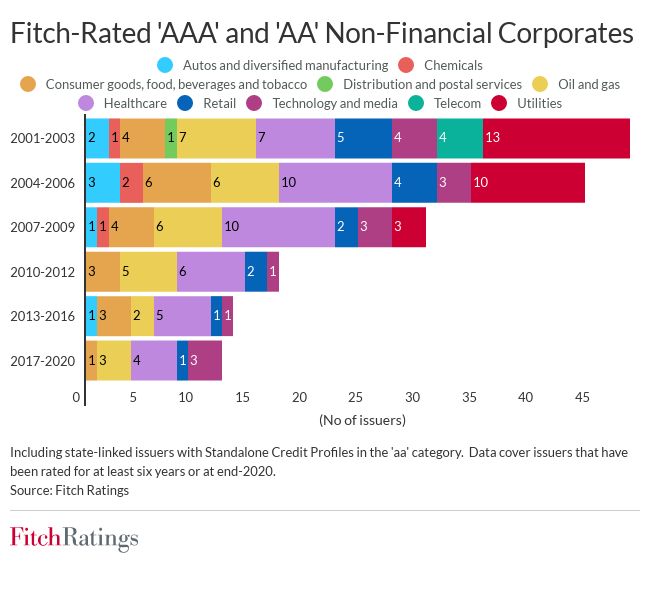 Industries where issuers still achieve ratings in the ‘AA or above’ category remain exposed to various pressures, but the intensity of disruption varies. Oil and gas is the only industry where a major strategic repositioning is required, due to the level of disruption related to hydrocarbons demand and the shift towards low-carbon energy. As a result of the associated execution risk, ratings could come under some pressure in the medium term if the transition is not managed successfully. However, the relatively slow decline in oil consumption that we currently expect gives the rated entities some time to adapt.

Technology is the only sector where the number of ratings in the ‘AA or above’ category has been growing recently, reflecting its increasing role in the economy, bolstered by the acceleration of digitalisation trends during the pandemic.
Source: Fitch Ratings

2021-10-15
hellenicshippingnews...
Previous: There’s a crisis in the economy, the government should pay people to go to work, says Barry Sternlicht
Next: Dollar looks set to end week down, yen nears a 3-year low