Strong Execution and Delivery of Projects
1. The Group started the year with a total of 16 projects under execution, with 12 projects scheduled for completion and delivery in FY2022. Seven of the 12 projects have been delivered year-to-date. In addition, for the Ropax ferries project, two of the three zero-emission fully battery-powered ferries have been delivered.

2. Measures undertaken by the Group to mitigate the impact of residual COVID-19 challenges, in particular supply chain issues and skilled labour availability, have enabled smoother execution of projects.

Financial Review
3. The Group recorded revenue of S$1.1 billion for the six months ended 30 June 2022, an increase of 30% compared to the corresponding period in the prior year. This was attributed to positive outcomes for project completion terms with key customers, as well as initial contributions from new projects.

4. The Group reported a net loss of S$143 million for the six months ended 30 June 2022, a 78% reduction from 1H2021 net loss of S$647 million. The 1H2022 loss was due to lower than breakeven activity volume, as existing orders are completed and new orders secured in 1H2022 would start contributing to revenue mainly in subsequent periods. Residual COVID-19 challenges also contributed to one-off increases in cost provisions and overheads in 1H2022.

6. Overall, operational and financial performance of the Group improved significantly for the reported period with the progressive resolution of COVID-19 challenges to enable smoother completion of existing projects, and ongoing prudent costs and overheads management. 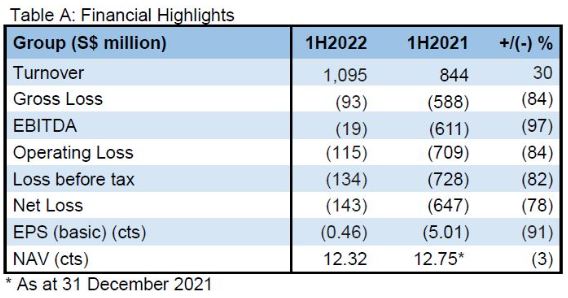 8. A highlight was the landmark delivery of Transocean’s Deepwater Atlas, the world’s first 8th-generation ultra-deepwater drillship, at end June 2022. It is the first-ever high-specification drillship to be designed and constructed in Singapore, based on the Group’s proprietary Jurong Espadon 3T drillship design. The vessel is the first of two Transocean drillships built by the Group and the only ones in the world to feature three-million-pound hook-load hoisting capacity and well control systems able to accommodate 20,000 psi drilling operations. The drillships are capable of operating at 12,000 feet water depth and drilling to depths of 40,000 feet, a breakthrough in the industry.

Ongoing Project Executions
11. As at end-June 2022, the Group has five more projects scheduled for delivery by the end of the year, with a further seven projects to be progressively delivered from 2023 to 2026. The Group is committed to executing and completing the remaining projects safely and efficiently.

12. The Group is close to completing the construction of the largest LNG bunker vessel built in Singapore, for Mitsui O.S.K. Lines (MOL) and charterer Pavilion Energy. Successfully launched in April 2022, the newbuild 12,000m3 vessel is scheduled to undergo sea and gas trials prior to its scheduled delivery in 4Q2022.

14. The Group has made good progress on the Front-end Engineering Design (FEED) of a FPSO facility for Altera’s Dorado FPSO project in offshore Australia with the hope of securing an engineering, procurement and construction (EPC) contract.

New Contract and Order Developments
15. In March 2022, Sembcorp Marine secured a landmark contract from Maersk for the construction of a Wind Turbine Installation Vessel (WTIV) for deployment to U.S. offshore windfarms Empire 1 and 2. The WTIV brings breakthrough design to the wind market with the vessel designed to operate at a high level of efficiency and to handle the next generation of larger wind turbines.

16. In June 2022, Sembcorp Marine’s Estaleiro Jurong Aracruz (EJA) Yard in Brazil won an EPC contract (worth approximately S$200 million) from Emgepron, a state-owned company linked to the Ministry of Defence in Brazil to design and build NApAnt, a support vessel for the Brazilian Navy for scientific research deployment in the Antarctic.

17. The Group has entered into an Engineering, Procurement, Construction and Installation (EPCI) contract with a major energy company for a gas topsides project in Australia. Work on the topsides will be for four years, commencing 2022.

18. Overall orders visibility has progressively improved since the beginning of the year, underpinned by rising oil prices and renewed concerns of energy security in the wake of geopolitical tensions. Oil and gas companies and energy suppliers have picked up pace in reviewing ongoing new projects and previously deferred activities.

19. The Group is actively working on multiple tender opportunities in the O&M, offshore wind/renewables and new energy segments, as well as offshore vessels upgrading projects. 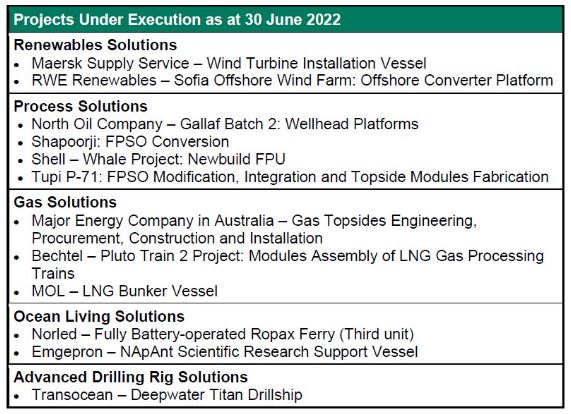 Net Order Book
20. The Group recorded a net order book of S$2.52 billion as at the end of June 2022. This consists of approximately S$2.2 billion of projects under execution and S$0.3 billion of ongoing Repairs & Upgrades projects.

21. With the world’s energy transition underway, the Group has recorded a growing share of renewables and cleaner/green solutions in its order book. As at the end of 2021, renewable wind energy and other cleaner and green solutions account for approximately 43% of the Group’s net order book. This expanded to 74% at the close of June 2022.

Cash Flow and Liquidity Management
22. The Group continues to register improving operating cash flows and overall cash balance with receipts of project payments on successive completion and delivery of projects in 1H2022. Compared to the Group’s net debt/equity ratio of 0.49 times at end FY2021, the ratio has improved to 0.44 times at end 1H2022.

23. Since the FY2021 results update, there has been no further disbursement of the proceeds from the September 2021 S$1.5 billion Rights Issue. The balance of the net proceeds remains at approximately S$720 million.

Proposed Combination
24. On 27 April 2022, the Group announced that it had entered into definitive agreements for the proposed combination of Sembcorp Marine and a restructured Keppel Offshore & Marine Ltd (“Keppel O&M”) (the “Proposed Combination”).

25. The Proposed Combination will further augment the Group’s depth and breadth of engineering and operational capabilities, and provide a broader geographical footprint and larger operational scale. With increased agility, technical strength and operational efficiencies, the new Combined Entity will be better able to thrive on a global stage which is expected to become increasingly more complex and competitive.

26. The Group also announced that, prior to the Proposed Combination, Sembcorp Marine will undergo an internal restructuring exercise via a scheme of arrangement (the “Sembcorp Marine Scheme”) where:

28. The Proposed Combination is based on a 50:50 enterprise value ratio between Sembcorp Marine and Keppel O&M. After taking into account the respective capital structures of the two companies, a S$500 million cash payment that Keppel O&M will make to Keppel Corporation, and other adjustments, the agreed equity value exchange ratio is 44% to Sembcorp Marine and 56% to Keppel Corporation.

30. With this arrangement, future risks in relation to the legacy rigs and associated receivables (such as their recovery amounts) will not affect the Proposed Combination. In addition, an equivalent amount of inter-company payables will be removed from the balance sheet of the restructured Keppel O&M (to offset the legacy assets excluded). The restructured Keppel O&M will have minimal debt, which will preserve the debt headroom of the Combined Entity to facilitate future expansion.

31. The Company has submitted various relevant regulatory applications, including its notification dated 29 July 2022 to the Competition and Consumer Commission of Singapore (CCCS). As part of CCCS customary review process, it is seeking public feedback on the proposed merger. The overall process of obtaining global anti-trust clearances is ongoing.

32. The extraordinary general meeting (EGM) for Sembcorp Marine shareholders to vote on the Proposed Combination is expected to be convened in 4Q2022 after key approvals and other regulatory submissions are completed.

Strategic Technological Collaborations
33. Sembcorp Marine has also taken a major step forward to build on and enhance its existing sustainability efforts by setting ambitious goals to be achieved by 2030. The Group continues to enrich its core engineering capabilities to develop novel and non-traditional technological solutions through strategic collaborations with government agencies, research institutions, classification societies and industry partners. Some notable developments include:
• The design, fabrication and integration of a hydrogen fuel cell system onto a Ropax vessel chartered by Shell and owned and operated by Penguin.
• The development of a first-of-its-kind ammonia bunkering vessel for MOL and ITOCHU Corporation Group which has secured AiP from the American Bureau of Shipping.
• The development of sustainable ocean data centres in collaboration with Big Data Exchange and the National University of Singapore.
• A joint research project with the Technology Centre for Offshore and Marine, Singapore (TCOMS) to further develop, validate, test and enhance the Group’s SWACH (Small Waterplane Area Cylindrical Hull) Floating Wind Solution to elevate the future readiness of the design and technology for operation in deeper and harsher environments further offshore.
• Development of the Group’s proprietary Semi-submersible Integrating Vertical Adjustable Mast (SI-VAM) Wind Solution, which has received AiP from DNV.

Outlook
34. The Group continues to make steady progress towards delivering all five remaining projects that are due by end 2022. Work is also ongoing for the further seven projects to be delivered from 2023 to 2026.

35. The industry outlook for the oil & gas, offshore wind/renewables and other green solutions continues to improve. Orders visibility has become clearer in tandem, and the Group continues to actively convert its orders pipeline into firm contracts in the foreseeable quarters. This will contribute to improving the overall activity volume for FY2022.

36. Taking the above factors into account, the Group anticipates operational and financial performance to continue to improve. However, the Group expects to make a loss for FY2022.
Source: Sembcorp Marine