Has the lid finally come off for crude oil tanker demolition in 2021? If judged by the 1.9m DWT of capacity that was removed in September, the answer is “yes”. Despite this, it is still too early, however, to declare a sudden U-turn, as we have only seen 2.2m DWT scrapped in the previous eight months of this year.

For the month of September, 15 crude oil tankers, three oil product tankers, two small Handymax bulkers and no containerships have been demolished. For 2021 as a whole, just 15 containerships (average age of 28 years) have been demolished, a testament to a spectacularly profitable container freight market. A freight market which is in sharp contrast to that of crude oil tankers.

Whereas September did not bring around any sudden events, that could prompt October to see high crude oil tanker demolitions too, the removal of three high steel content super tankers bringing in USD 27.4m per ship to its owners, may be a one-off. 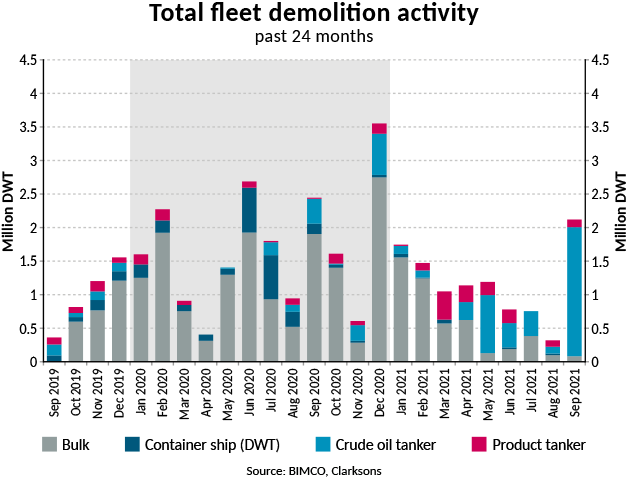 “The increasing number of VLCCs being demolished is the main driver behind this 39-months high. Still, in addition to the four 25-year-old VLCCs, we had one Suezmax, four Aframaxes removed from the actively trading fleet in September adding to the much-needed rebalancing of the supply and demand balance of the market,” says Peter Sand, BIMCO’s Chief Shipping Analyst.

“Spot market freight rates for all sizes of crude oil tanker are still loss-making as we head into the early winter market, which often brings about positive surprises to the spot market freight rates, while denting the demolition interest at the same time,” Sand says.
Source: BIMCO, By Peter Sand, Chief Shipping Analyst

Previous: China Sept forex reserves fall to lowest since April
Next: Are Crude Tankers Primed for an Earnings Comeback?