Shale was the cheapest acreage of 2020, at historical lows, as global M&A deal value plunged

The global deal value of upstream M&A activity in 2020 dropped to $87.9 billion, the lowest level in over a decade, largely due to the Covid-19 pandemic, a Rystad Energy report reveals. The shale sector was the worst hit as the acreage that changed hands was sold cheaper than any other resource type, at $1.2 dollars per barrel of oil equivalent (boe)* – a historical low for the modern shale industry.

Total M&A deal value more than halved from 2019’s $178.5 billion as the number of deals slumped from 480 in 2019 to 314 in 2020. The market turbulence led to an unfavorable environment for sellers with low valuation of resources, which prompted many sellers to delay sale processes and even cancel some previously eyed transactions. 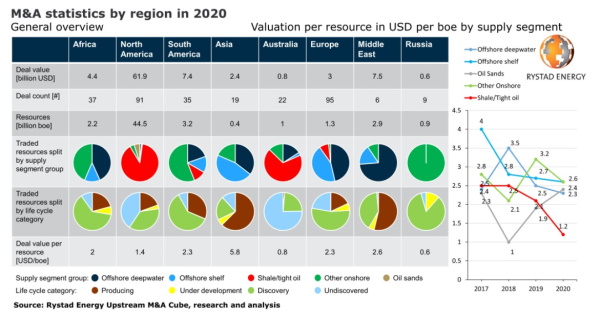 The five largest deals of 2020 also represented more than half of the total traded resources, dominated by shale and tight oil resources. While the resources in this supply segment traded at around $2.10 per barrel of oil equivalent (boe) in 2019, their traded value dropped to about $1.20 per boe* in 2020, a historical low for the modern shale era.

The valuation of traded resources also varied based on location, with Asia leading the way in terms of deal value per traded resource in 2020. This goes hand in hand with the fact that a high share of the deals announced in the region involved producing resources.

In Africa, Europe and South America, where most of the M&A deals in 2020 involved discovered resources, the deal value per resource was around $2 per boe. In Australia and North America, on the other hand, the deal value was around $1 per boe – mostly because the traded assets contained a higher share of undiscovered resources than other regions, and because of the share of shale and tight oil resources traded.

“The 2020 crisis is not comparable with anything shale has gone through historically, so all companies were extremely discounted on the stock market. Yet on the bright side the environment pushed for further industry consolidation and tremendous efficiencies,“ says Alisa Lukash, senior shale analyst at Rystad Energy.

Now that we are looking into 2021, it is reasonable to believe some ex-bankruptcy cases will be good M&A targets, yet the prices per boe should be higher in core oil regions as the market has rebounded already.

*It is worth noting that Rystad Energy’s calculations take as denominator the sum of producing, discovered but undeveloped, and estimated undiscovered resources of the acreage. Therefore, the values should not be used for benchmarking different supply sources for any given year, due to differences in the oil and gas mix, different methodology for estimation of economically recoverable resources for different supply sources, as well as different valuation drivers and market philosophy per source.
Source: Rystad Energy