Shape up or ship out: EU Commission pushes hard on maritime emissions

The latest Intergovernmental Panel on Climate Change (IPCC) report published on 9 August paints a bleak picture on the status of the world’s climate, and scientifically proves that it will be extremely difficult to reach the 1.5-degree target under the Paris Agreement. The publication of the report couldn’t have been timelier, only three weeks after the EU Commission released its Fit for 55 package, a toolbox of proposals to reach the Union’s 2030 emission-reduction target of net 55% compared to 1990-levels.

Shipping accounts for ~2.9% of GHG pollution, but still no regulation under Paris Agreement

The proposal package addresses practically all aspects of society, ranging from wood harvest methods to how much the European car fleet is allowed to pollute in the future. The shipping industry has come under the spotlight after so far dodging scrutiny from climate policy makers in Brussels.

As the EU Commission highlights, shipping accounts for 2.9% of global greenhouse gas pollution, but no adequate measures are in place, either at the global level or in the EU, to achieve the emission reductions necessary from the maritime transport sector to be in line with the EU’s increased level of climate ambition. There is an effort to rein in emissions under the UN’s International Maritime Organization (IMO), but the EU is increasingly impatient with that approach.

In the Fit for 55 proposal package, three directives specifically address decarbonization of the European shipping industry: revision of the EU Emission Trading System (ETS), revision of the Energy Taxation Directive, and the new regulatory proposal named FuelEU Maritime. Together, these three regulations propose to add a direct cost to shipping emissions, raise the cost of high-carbon shipping fuels, and set targets for deployment of low and no-carbon shipping fuels.

In addition to these three sticks, the EU has already put in place carrots through the EU Taxonomy and Sustainable Finance regulation from last year and the Innovation Fund to drive investments in new no-carbon shipping technologies.

The inclusion of shipping into the EU ETS is perhaps the most influential proposal to the European maritime industry. As opposed to European heavy industry, the maritime sector is suggested not to receive free allocations under the EU ETS, meaning that shipping companies would have to purchase allowances for every tonne CO2 emitted on a 1-to-1 basis. With the European carbon prices currently trading around €55/tonne and projected to rise towards triple-digit figures during this decade, emissions could quickly become a high-priority cost factor for shipping companies operating in EU waters.

The EU Commission has proposed a four-year phase-in period where shipping companies will be compliant for 20% of their emissions in 2023 followed by gradual increase to full compliance in 2026. The scope will cover all intra-EU shipping and 50% of voyages going in to/out of the EU and apply to ships with gross tonnage above 5,000 that are regulated under the EU Maritime MRV Regulation. Several vessel types are exempted from the MRV regulation and therefore from the proposal, including drilling rigs and vessels used for offshore petroleum or wind installations.

The EU ETS operates under the “polluter pays” principle, which means that the shipping company could hold the entity that is directly responsible for the decisions affecting the CO2 emissions of the ship accountable for the compliance costs. As E&P companies normally purchase the fuel for shuttle tankers and decide their fuel, route and speed, it could be that oil companies will have to pay for carbon allowances and not the shipping company, depending on the contractual arrangement between the parties.

The Energy Taxation Directive is suggested to be revised to include intra-EU maritime waterborne navigation, including regular services navigation, fishing and freight transport, that are currently fully exempt from energy taxation. The proposal presents several options for how fuel taxation can be extended to the maritime sector, including an alternative where tax rates are based on the energy content of the products and according to their environmental performance as well as a widened taxable base. This option would define the minimum rates based on the energy content (in gigajoules), rather than on the traditional volume basis. As part of this option, the proposed new minimum tax rate would be automatically adjusted each year, starting at 0.15 EUR/GJ as the base value for one unit of energy content in 2023.

The maritime and inland shipping sector, including offshore drilling and installation vessels, would be subject to the same minimum rate as those for the primary sector, such as agriculture and fishing, to reduce the economic incentive to purchase fuel outside the EU. In order to provide an incentive to their use, sustainable alternative fuels and electricity would have a minimum rate of zero for ten years. The Energy Taxation Directive does not apply EFTA states, being Norway, Iceland and Liechtenstein.

Through the new FuelEU Maritime regulation proposal, the Commission aims to increase demand of renewable and low-carbon fuels in the maritime transport sector by setting out long-term carbon intensity reduction targets until 2050. As the Commission highlights, an increased predictability of the regulatory framework is expected to stimulate technology development and fuel production and help the sector unlock the existing chicken-and-egg situation between demand and supply of renewable and low-carbon fuels.

Applying to all ships above 5,000 gross tonnage, the suggested carbon intensity targets for 2025 and 2030 of -2% and -6 %, respectively, implies a rather modest emission reduction trajectory over this decade. Thereafter, the targets pick up pace as the Commission expects a larger-scale deployment of currently immature low/no-carbon technologies.

By 2050, the carbon intensity of maritime fuels is slated at -75% compared to 2020-levels, measured in gCO eq./MJ. The carbon intensity goals will apply on vessel basis and not company basis, and require annual reporting, verification, compliance and certification per vessel. The FuelEU Maritime regulation is proposed to apply for energy used during stay within an EU port, energy used in intra-EU voyages, and 50 %of energy used in extra-EU voyages. Furthermore, from 1 January 2030, the proposal states that ships compliant under the regulation are required to connect to onshore power for all energy needs while at berth in an EU port. As the FuelEU Maritime proposal is based on Shipping MRV Regulation definitions, it is understood not to cover offshore drilling rigs or installation vessels.

If the proposal is approved in its current form, non-compliance could come at a significant cost. If a ship has compliance deficit on 1 May following a reporting year, the shipping company shall pay a penalty for each non-compliant EU port call based on a pre-defined formula presented in the proposal. Furthermore, if a ship has failed to present a valid FuelEU certificate for two or more consecutive reporting periods and other enforcement measures have failed to ensure compliance, the ship can be expelled from voyages between EU member states until the company fulfils its obligations.

All proposals presented under the Fit for 55 package will now be scrutinized by the EU Parliament and EU Council. Each body will debate, discuss and negotiate internally and agree on a legislative text. Once they have reached their positions, the Parliament and Council will meet for negotiations to find a common ground on each directive.

Some of the proposals might be checked-out rather quickly, while others could turn out to be more toxic and require intense horse-trading among EU decision makers. While some of the proposals are planned for implementation already from 2023, others could be ready for launch in 2025, and yet others might be concluded later or never become reality. It is too early to guestimate the form and shape of the final legal texts, but it seems certain that the European shipping industry should prepare for a future consisting of emission costs, emission reductions and strict reporting requirements. 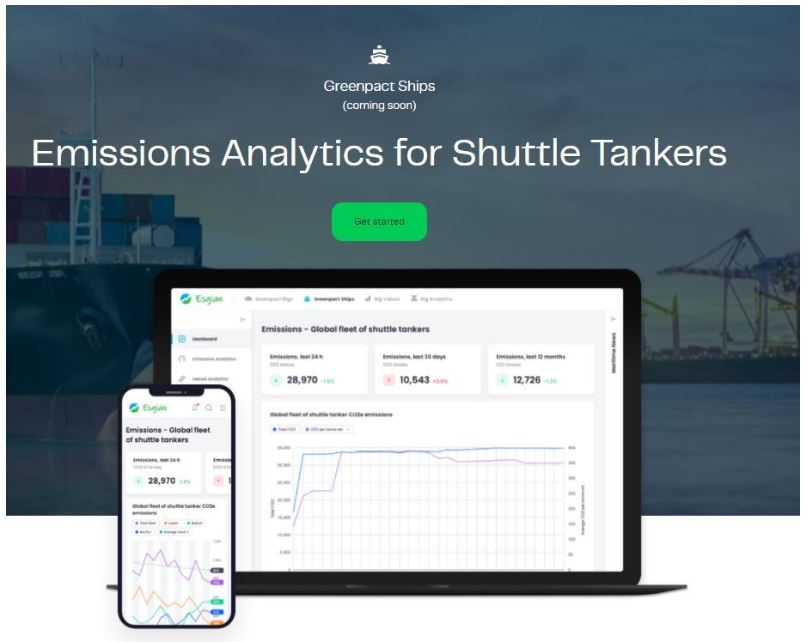 Esgian is about to launch its latest emission analysis tool: Greenpact Ships. The database provides users with the ability to calculate emissions for entire world fleet or individual ships and voyages; access emissions data from individual ships, fleet, operator, country; compare emission performance across ships, companies, countries and more. Meanwhile, our analysts continuously track the market and publish the emission-related news as it happens.
Source: Esgian

Previous: JSW Steel to provide guarantee for loan repayment on behalf of JSW Ohio
Next: Green Shipping: The Not-So-Distant Future?

An uneven revival in newbuilding orders