It is perhaps surprisingly common for things to go wrong in the processes around berthing ships, particularly in terms of manoeuvring in the port area and mooring. Aimed at the ship/port interface, read on to understand TT Club’s experience and ways to mitigate the risks.

The operations involved in berthing ships are highly dependent on human interaction and many incidents have their root cause in this fact. When things go wrong, damage may result to the ship itself, the berth and quay cranes, and there is potential for pollution to occur and, perhaps of greater concern, injuries to crew and shoreside personnel can also result.

The two key areas of heightened risk are ship manoeuvring in the port and the process of mooring; the former exposes the ship to collisions and allisions while the latter primarily results in injuries or fatalities to crew or mooring line personnel.

In most locations, berthing involves the combined efforts of the pilot and the master to achieve safe berthing of a ship. Inevitably, good communications and mutual understanding of each other’s roles are critical for the safe conduct of the ship in pilotage waters, essentially integrating the pilot into the bridge management team. The pilot’s primary duty is to provide accurate information to ensure safe navigation, while the master retains ultimate responsibility for the safety of the ship. Issues have proven most likely to arise where the master is new to the port and/or the pilot has not previously experienced the size or type of ship call at the port. It follows that port authorities and pilots must ensure that appropriate training, systems and procedures are in place to service the ships that they will be handling.

Engine and/or propulsion equipment failure is a common cause of ship collisions and allisions. On the ship side, proper maintenance systems and procedures should be in place and followed, including strict adherence to the ship’s Safety Management System. Equally, port authorities need to have a sufficient number of tugs with enough power, particularly taking account of changing customer requirements, such as larger ships. 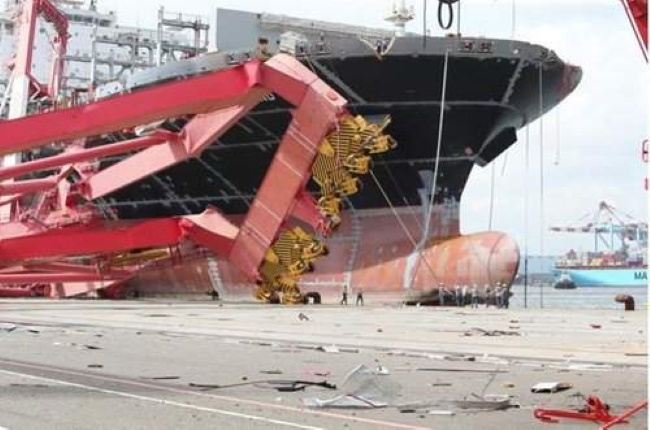 Ensuring that a ship is made fast requires that winches are in good working order and ropes are in sound condition. Where in poor or damaged condition, ropes should be replaced with spares. All ropes, wires and links used for mooring should be certified (and documentation available for inspection). It is also important that all greasing points for winches are free, working correctly and have not been painted over.

In many ports bollards may have been in place and potentially unchecked for decades. There is currently no international standard to ensure that bollards are sufficient in number, quality and capacity, as well as suitably located for the tonnage likely to call at each berth. It may be appropriate to source non-destructive testing to verify the strength of bollards.

Emerging technologies offering vacuum and magnetic mooring systems may improve safety and the securing of ships. Such technologies dispense with mooring lines and therefore remove ship and port personnel from the risks inherent in the use of lines and winches. The safety advantages may be significant, while operational and infrastructure considerations may also justify their installation.

Traditional mooring operations aboard ships expose crew to danger; they need to be thoroughly trained and familiar with the physical environment. A recurrent issue in mooring incidents is that seafarers stand in areas exposed to injury should ropes part, often due to insufficient training.

On the shoreside, it is necessary to have sufficient personnel to be able to moor the ship safely and effectively. All mooring personnel need to be trained and familiar with bights, snap-back zones and the hazards associated with mooring operations.

Adverse weather can add significant risks for a ship in a port environment. Wind may cause unexpected heading changes and leeway; failure to compensate correctly for wind during berthing is a frequent cause of berthing incidents. The impact of wind conditions needs to be taken into account by the master and the pilot in their calculations, alongside tides, currents and the swell that may also affect a ship preparing to moor or sail.

Most ports only allow berthing and unberthing when the wind speed is below a certain level, generally between 20 and 30 knots – and also consider the wind direction, tides, currents and swell. It is common for locations particularly susceptible to tropical or seasonal storms to implement additional procedures to send ships out to sea when severe weather is forecast. Experience shows that unfamiliar and erratic weather conditions are becoming more prevalent; as a result, it is good practice for all ports to establish appropriate emergency plans. The risk of ships’ mooring lines breaking during severe weather conditions is substantial; the availability of additional mooring lines or tugs on standby, though necessary, may be difficult to deploy in adverse conditions.

Operationally, it makes sense for both ports/terminals and ships for quay cranes to be positioned so that they can be set to work without delay. Nevertheless, whilst a ship is berthing, the safest location to park quay cranes is away from the allocated berth. This is generally impossible due to the length of the berth and location of other operations. For most purposes, the least risky location to park quay cranes during a ship’s berthing is at the centre of the intended berth; this mitigates exposure to the bow and stern which are most likely to impact the berth in the event that control of the ship is lost.

In summary, the stakeholders on both sides of the ship/port interface need to focus on their own issues, while ensuring that there is effective advance and ongoing communications and plans that enable them to work together to manage the safety of people, assets and the environment.
Source: TT Club