Ship financing has continued to retreat, now at its lowest level since the global financial crisis of 2008, said Petrofin Bank Research, in its latest annual survey. Some of its highlights are the following:

– The Petrofin Index for Global Ship Finance continues to decline, down from 75 to 65.
– Top 40 Banks’ lending to shipping now stands at $300.7bn, the lowest level since Petrofin started monitoring the global portfolio in 2008.
– European portfolios continue their steep decline.
– The Far East also marks a small decline during 2018.
– US portfolios are cautiously on the rise.
– Among European banks, Greece is gradually lending more to shipping, as is France.
– Continuous advance of non-banking finance and, especially, leasing.

According to Petrofin’s research a significant $44.3bn has been knocked off the portfolios of the top 40 banks over the last year. Global bank finance stands at the lowest level of the last 12 years. Banks are well underway in addressing their non performing loan portfolios and some, like Nord LB are progressing rapidly with the sale of their portfolios. Others are concluding the process that started years ago. Compared to 2010, the European share of the global ship finance market has dropped from 83% to 58.7%. Far Eastern share stood at 34.8% in 2018 compared to 35.07% in 2017, still representing a significant rise since 2010 of approx. 140%. Regarding the American banks, they now occupy 6.48% of the market.

The growth of the global fleet continues to be funded from non-banking sources. For example, during 2018, Chinese Leasing to shipping stood at $51.3bn, compared to $47bn in 2017. The Petrofin Index has fallen by 13% since last year, whereas the global fleet is up by 3.12% for the same period. As the vast majority of vessels are acquired with finance, the shift from banking to non-banking sources is quite prominent.

Bearing in mind the previous year’s reduction of $10bn, it would appear that the rate of decline has picked up momentum. It is yet early days to conclude if banks will continue reducing their exposure in the sector and a great deal will depend on the overall available lending resources of banks and their commercial strategy, as well as the competition by unregulated non-banking funds, leasing companies and other providers. 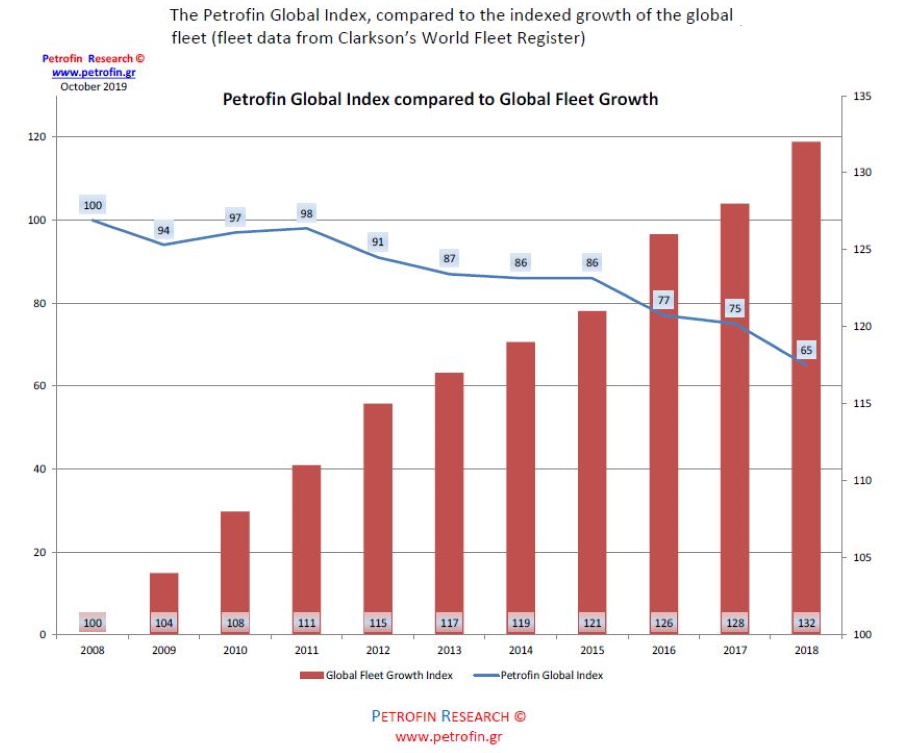 The outlook for 2020 and beyond

“The decline of Western bank ship finance has assumed dramatic proportions. In just 11 years and despite the rise in the global fleet, about $160bn has been shed via natural repayments, provisions or loan portfolio sales. The trend seems to be continuing, however, the absolute number of candidate banks for exit or reduction has reduced to very few. Those remaining are successfully combining ship lending with other bank services and thus remain in the industry.

The onrush to bridge the gap was initially taken up in part by Far Eastern banks, but this seems to be abating as credit conditions and volumes in China have come under enhanced central bank scrutiny and leasing has become a preferable way of lending with vessel ownership being under the lessor’s name. All in all, global ship lending by the top 40 shipping banks has fallen almost 35% since 2011. The Petrofin Global Index marks an uninterrupted fall since 2015, from 86 points to 65 to 2018 year end and a drop from 98 points reached in 2011.

The new ship finance protagonists are Far Eastern Leasing companies, which are largely unregulated compared to banks. They offer long term finance option for often higher percentage loans and at a fixed rate. This, in today’s low US$ interest rate environment, is quite attractive. Additionally, although leasing companies in China, Japan, Korea and the West are relying on the underlying client’s quality, the emphasis is more on ‘commodity’ financing where volumes and standard terms leasing are the norm.

Although leasing has not replaced bank finance, it has gained both in popularity and volume and is often, especially for the medium to small owners, the only available and affordable source of finance. Financing by funds and increasingly by family houses has also developed well with a plethora of providers albeit at a higher cost. Some have sought to use a retail investor base, e.g. Yield Street and this has gathered momentum. Export finance has slowed down in line with the slowdown of newbuilding orders.

The Scandinavian combination of investment and finance via the Oslo market has developed strongly and it uses either Scandinavian investors or funds or family houses to invest in shipping projects with banks providing low senior finance. In general, the shipping markets have been supportive for lenders as all sectors are performing well and are recovering. Although the shipping conditions have been helpful to banks, the international banking environment remains challenging with higher capital ratio criteria and other central bank regulatory requirements. In addition, the availability of loanable funds by western banks remains restricted and this is not supportive for a capital intensive industry, such as shipping.

All western banks have conducted reviews, as to their future shipping exposure and whether ship finance should remain a separately run activity. Some banks have concluded that their continued presence in shipping would benefit by their shipping departments becoming part of a bigger internal corporate structure e.g. DNB, ABN AMRO, BNP and others. Others, like Societe Generale, have formed a strategic alliance with a Far Eastern leasing procurer to develop shipping business. This process is continuing. Increasingly, banks have sought to emphasise fees, non-risk assets and services and de-emphasise loan volumes to a level they deem strictly necessary to satisfy their core clients.

This process of re-orientation and restructuring is still ongoing and, as such, may well adversely impact further on western banks’ loan exposures, in the next few years. Despite the less than attractive banking conditions for banks, there are some fresh entrants, which have developed their own ‘niche’ approach. These tend to consist of smaller local banks, whether in Europe or the Middle or Far East. Their loan portfolios are not high, but collectively they do support both local clients, as well as smaller owners. 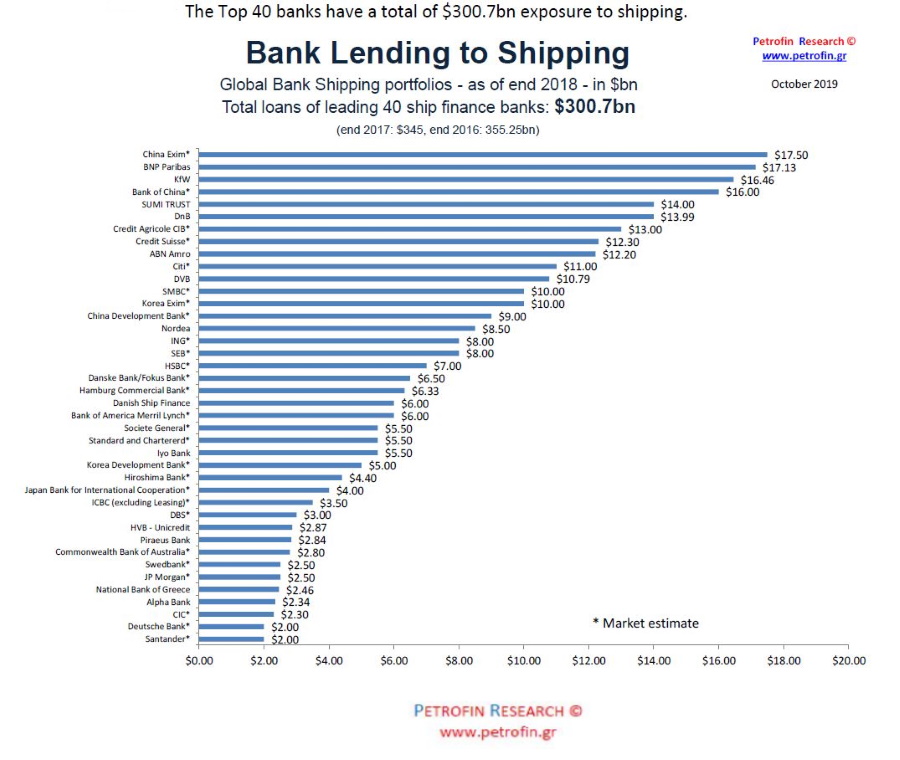 Amongst the newer banks are M&M, Berenberg, Warburg, ATB, Bank of Cyprus, Hellenic Bank, Astrobank and others, which have increased their lending, enjoying both low LTVs and satisfactory loan yields. However, their overall contribution to ship finance remains relatively modest.

Looking into the future, we anticipate continued growth by leasing companies. The same should be said of investment and family offices, which have grown enormously over the last decade, most of which, however, focus primarily on the equity side of the business, whilst the remainder focus on the ship finance side. Where lending is offered, their target yields are often very high (in excess of 12% p.a.), that only few owners can accept, despite the presence of grace periods and longer loan profiles. However, if the timing is right, aggressive owners may well benefit from such higher leverage but expensive schemes.

The US equity and bond markets have been relatively quiet, with few IPOs. Overall, an increase, though not dynamic, in IPO activity is expected in the US but it is unclear if it will happen in 2020. There is also steady development of the shipping bond market for medium to large companies. Returning to the banking ship finance market, it is essential for western banks to be able to attract fresh capital at a low cost, in order to compete with their Far Eastern competitors. It is anticipated that western banks will regain some of their lost competitiveness and appetite in time, but a great deal would depend on their overall lending capabilities and to the extent that shipping is attractive compared to other industries.

The stability of the global financial economy as it addresses the extremely high levels of global debt, will also have a bearing on the ability of all banks to lend substantial funds to the shipping industry. The development of a trade tariff’s war between the US and China and recently between the US and the EU is worrisome, as it adversely affects demand for shipping and trade flows and is destabilising. Generally, the turn to trade protectionism has a heavy negative impact on shipping. Recently, geopolitical problems have grown primarily in the Middle East and Near East as well as in other areas as the period of ‘detente’ seems to have been replaced by populist aggressive leaders minded primarily for their own re-election and / or country. Thus far, in the last year, the ship finance industry has been able to continue to perform and in many cases, clear up old problems via loan portfolio sales. This cleansing process is healthy for the industry and allows for fresher lenders to develop their own approach and policy towards ship finance”, Petrofin Bank Rsearch concluded.
Nikos Roussanoglou, Hellenic Shipping News Worldwide