Ship owners have been rather active in the demolition market of late, as prices are still rather attractive. In its latest weekly report, shipbroker Clarkson Platou Hellas said that “as the tanker charter rates continue to struggle, several Owners seem to be making a quick decision to catch the recycling market whilst it remains hot as we have seen several larger Tanker units being circulated for sale during the week. The question is, however, whether these tanker units are eventually concluded for recycling or if indeed, further trading buyers appear and steal the units away from the clutches of the recyclers. The Bangladeshi recyclers appear to be in the prime position to acquire any available unit, as their current indications remain higher than their counterparts elsewhere in the subcontinent. The rates from Pakistan are still firm, however still fall short of those on offer from Bangladesh, whereas the Indian market this week saw a fall by some USD 25/ldt from recent weeks following a significant drop in finished steel products in the last 14 days. The Bangladesh plate prices continue to provide justification for the recent high offers on the table from the Buyers and there does not seem to be any concern for any correction, however there is now most definitely some caution that has crept in from the Indian market”.

In a separate note, shipbroker Allied Shipbroking added that “tankers continue being the key stockpile for the ship recycling market, with more and more owners taking the option to offload their vintage units due to the persistence of uninspiring freight earnings. However, the anticipated market rebound in the segment could upset the pool of potential tonnage available for recycling in the coming weeks. Interest for demolition in the rest of the key shipping sectors continues to be minimal. Bangladesh was not able to attract many units during this past week, with fundamentals though remaining robust in the country. 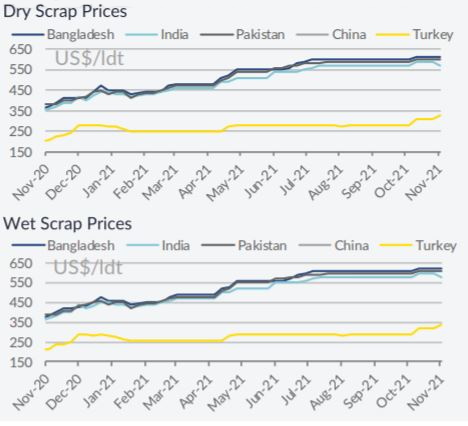 Therefore, we expect more deals to emerge in the coming weeks. In contrast, India has seen its activity rising as of late, with HKC deals still being a key source. However, the diminished scrap prices noted these past couple of week is likely to diverge interest elsewhere in the near future. Finally, another quiet week was noted in Pakistan, as local players were not able to compete with the rest of the Indian Sub-Continent. Prices are still firm, while deteriorating fundamentals elsewhere could possibly allow for a rise activity for local breakers in the near term”, the shipbroker concluded. 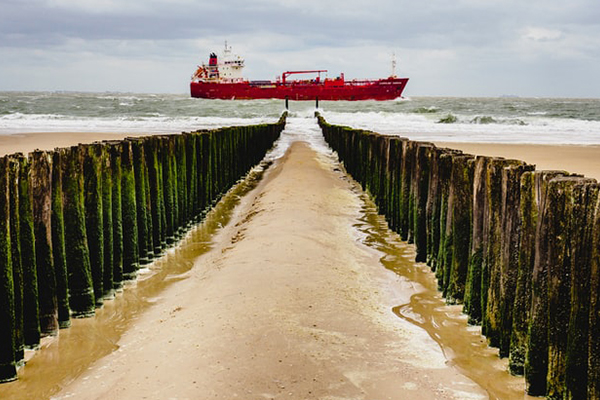 Meanwhile, GMS , the world’s leading cash buyer of ships said that “the recent noteworthy drop in the Indian ship recycling market seems to have reverberated across the sub-continent recycling sector this week, as competing markets start to reverse their vessel offerings in near unison. Bangladesh has remained largely quiet for much of the week as they observe the ongoing price reductions, whilst local Recyclers expect further falls ahead. Indian steel plate prices have declined by nearly USD 45/LDT over recent weeks, leaving Alang Buyers rather spooked and fearful to maintain previous offers, or even consider offering on any fresh units.

Yet, as the week drew to an end, there were signs of a slight rebound on steel prices and sentiment. Of course, it may still take a couple of weeks of stability before end Buyers return to the bidding tables once again. Notwithstanding, the market appears to have peaked at these exceptional numbers above USD 600/LDT and end Buyers are struggling to reconcile themselves with fresh purchases at these impressive levels. Many expect a weaker market going into 2022, but the industry overall has been surprised by the continued performance of the market through the course of the year, as prices have surged above and beyond all expectations, having more than doubled from a low of almost USD 250/LDT through the halfway point of 2020. Pakistan remains stranded on the sidelines, watching market developments in both India and Bangladesh, hoping to get hold of a bargain or two, even though the supply of vessels for recycling remains remarkably sparse. On the Turkish end of things, despite demand remaining firm, the dearth of supply has kept local yards increasingly eager for tonnage, while the Lira breaks even more records against the U.S. Dollar”, GMS concluded.
Nikos Roussanoglou, Hellenic Shipping News Worldwide