Ship owners are adopting a rather conservative approach, when it comes to their new investments in the market, given the amount of uncertainty there is on the market. In its latest weekly report, shipbroker Intermodal said that “the improvements seen in the dry bulk market during the unexpectedly strong Q3 brought enthusiasm and optimism for a last quarter rally. Indeed as the BDI surpassed the 2,500 points level at the beginning of September, everyone in the market got excited about what was coming next, with the upcoming low sulphur regulations and the decrease in ordering activity both adding to the positive momentum. Yet, the downward correction that followed this exciting period came as a reminder of how volatile and unpredictable the dry bulk market and the shipping industry in general is”. 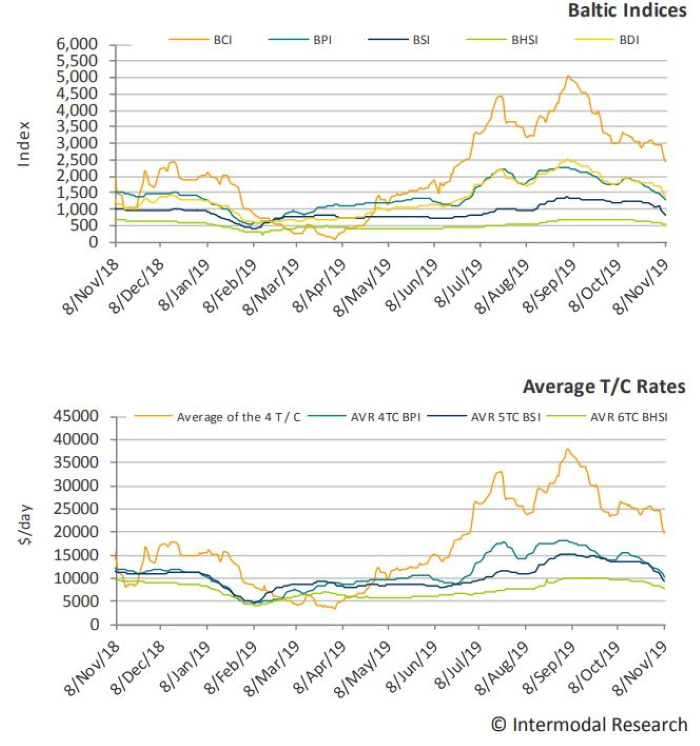 According to Mr. Konstantinos Kontomichis, Intermodal’s SnP Broker, “indeed, it’s been a while since we last enjoyed a positive market for a period longer than a year, while market patterns of the past seem to be lost, with breaking war news that previously affected rates now hardly affecting the market and earnings becoming more vulnerable to reports in regards to political and economic changes. The constant flow of important news nowadays is also affecting the traditional and alternative sources of financing available to shipowners, with the later unable to move fast in purchasing a vessel during times that asset prices are moving down, which also explains the softer activity in the second hand market and the overall anaemic activity on the newbuilding front”.

He added that “shipowners are taking their strategic decisions very carefully and the majority of them focuses on vessels that are around 10 years old, while in a few cases they finance themselves with 100% cash these investments. Indicatively, during the first quarter of 2019 we had 42 Supramaxes/Ultramaxes sales, 24 Panamaxes/Kamsarmaxes sales and 18 Post-Panamax up to Newcastlemax vessels sold; all with built dates ranging from 2004 to 2014. During the last quarter of the year so far the same age range has seen 15 Supramax/Ultramax vessels exchanging hands, 7 Panamaxes/Kamsarmaxes sold and only 3 Post-Panamax up to Newcastlemax sold. The expected drop in second-hand market activity due to the declining freight rates is also causing a substantial drop when it comes to interest for bigger vessels that are prices more expensively compared to their smaller counterparts”.

Kontomichis concluded that “based on the mood of the few active buyers at the moment and unless something changes dramatically, SnP activity will continue to be soft until the end of the year. Prospective buyers have a long list of available candidates to choose from; therefore this is undoubtedly a ‘buyer’s market’. All in all, market conditions help the ones who decide to renew their fleet and have the means to do so in order to position themselves better next year”.
Nikos Roussanoglou, Hellenic Shipping News Worldwide

Previous: Who is afraid of the sulphur cap?
Next: The making of Inmarsat’s GX5 satellite