Ship Owners Load Up on Newbuildings and Second Hand Ships

The start of the new year has been rather bullish in terms of contracting in the newbuilding market, while the S&P market has been rather active as well. In its latest weekly report, shipbroker Allied Shipbroking talked about “an impressive break period for the newbuilding market, with several new transactions emerging during these past few days. In the dry bulk market, we noticed strengthening interest for Ultramax units, while orders for Kamsarmaxes and Handysizes were also on the rise. The bullish sentiment and the positive momentum being seen in the freight market as of late, in combination with the optimistic projections for 2021 has lead many to re-consider newbuilding activity. The last few months of softening newbuilding prices have also played a role here. We expect activity to continue in this sector, as long as fundamentals continue to its favor. In the tanker market, things were not as equally impressive these past two weeks with minimal activity being noted. The uninspiring freight market that has dominated the whole sector since the summer and the hurt confidence has curbed interest for the time being. We expect appetite to gradually start to revive during the year, as demand is expected to rebound sooner or later, while at the same time the fleet growth has remained at relatively low levels. 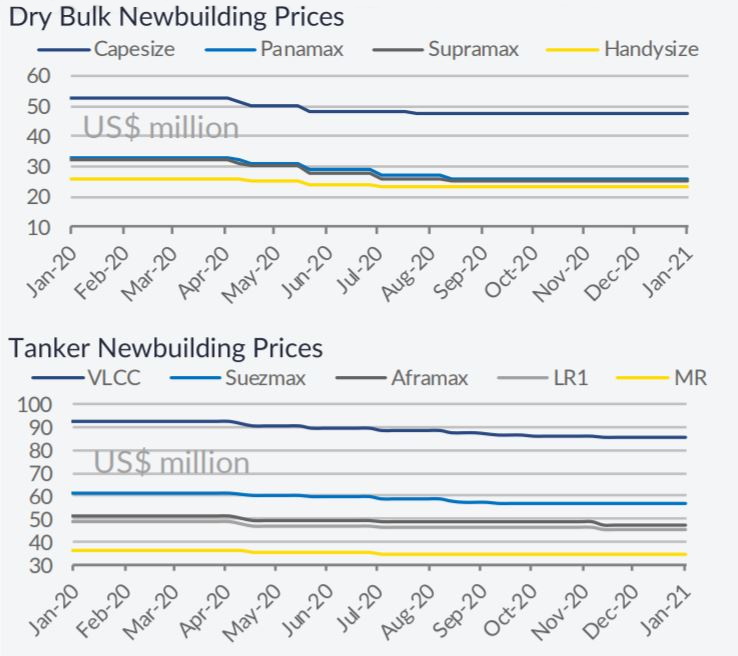 In a separate note this week, shipbroker Banchero Costa said that “in the drybulk space, Greek Owners Safe Bulkers and Carras Hellas have reportedly ordered 1x Kamsarmax bulker each at Oshima, Japan. These are the first orders after decades at this shipyard being inked with a Greek counterparty. Deliveries are set in 2023 at a price of around $29.5 million. It also emerged that Athenian Sea Carriers, Greece, has ordered 4 + 2 VLCC tankers at Hyunday at a ‘bargain’ price of $86 million apiece for deliveriesthrough 2022. 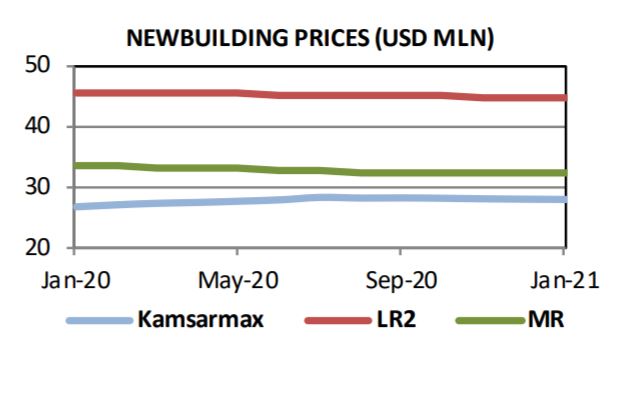 Meanwhile, in the S&P market, Allied said that “on the dry bulk side, the SnP market started the year on a very positive tone, given the plethora of fresh transactions taking place. Moreover to this, given the dispersion across the different size segments and age groups, we may well anticipate this good momentum to be sustained in the near term (at least). Notwithstanding this, a lot will depend on how things evolve from the side of earnings, given the rather typical softening in freight returns that is expected to take place at some stage in the first quarter. On the tankers side, things also moved on a strong trajectory in terms of activity noted during the past week or so. The highlight of the week was the spark in the VL market, given the good number of units changing hands, albeit involving only vintage units. However, given where we stand in terms of freight earnings as of late, this came hardly as a surprise. It looks as though that in the short term at least, this will mainly be a bargain “hunting ground” for most”. 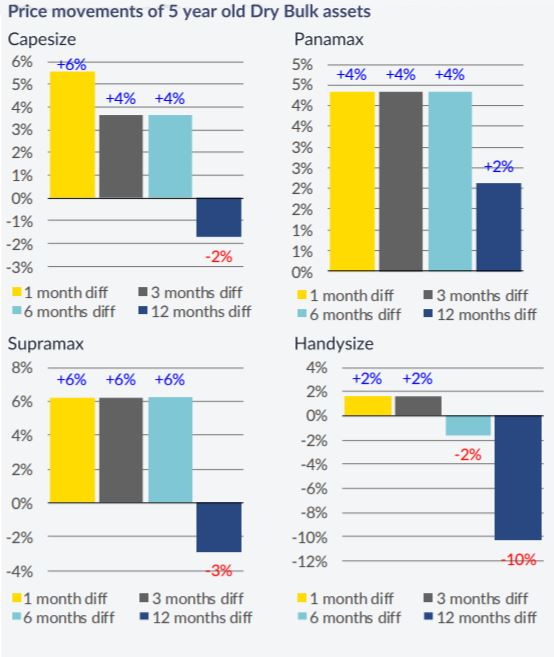 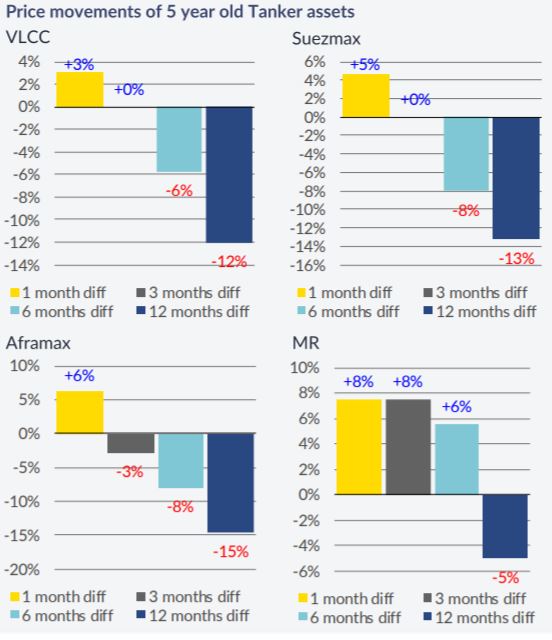 Banchero Costa added that “in the dry bulk sector, a 14 years old Capesize Unique Carrier abt 177k blt 2007 SWS has been sold at USD 11.35 million to clients of Berge Bulk. More activity was recorded in the Panamax/Kamsarmax sector. Ym Effort abt 81k blt 2008 Mitusi has been sold at USD 11.5 million. Back in November, Bacco abt 82k blt 2011 Tsuneishi has been sold at USD 15.4 million. Furthermore, a modern Kamsarmax Cly abt 81k blt 2017 Jiangsu (BWTS) has gone at USD 20.6 million to clients of Transocean. In the past few weeks Sbi Lynx abt 82k blt 2018 Jiangsu was done at USD 22.5 million (BWTS and scrubber fitted). A vintage Panamax Dione abt 75k blt 2001 Hyundai (SS/DD due April 2021 and BWTS fitted ldt 11.548 t) has been sold to Chinese buyers at USD 5.75 million. In the Handy segment, the modern Ocean Yield controlled handy La Loirais abt 39k blt 2018 JNS (BWTS fitted, ECO M/E DD due 03/202) has been sold to undisclosed interests at USD 16.3 million. Back at the beginning of December, Lentikia abt 39k blt 2015 Yangfan (BWTS fitted) has gone at USD 13.8 million. A Japanese controlled Handy, Sakura Ocean abt 37k blt 2011 Imabari is reported sold at USD 11 mln. 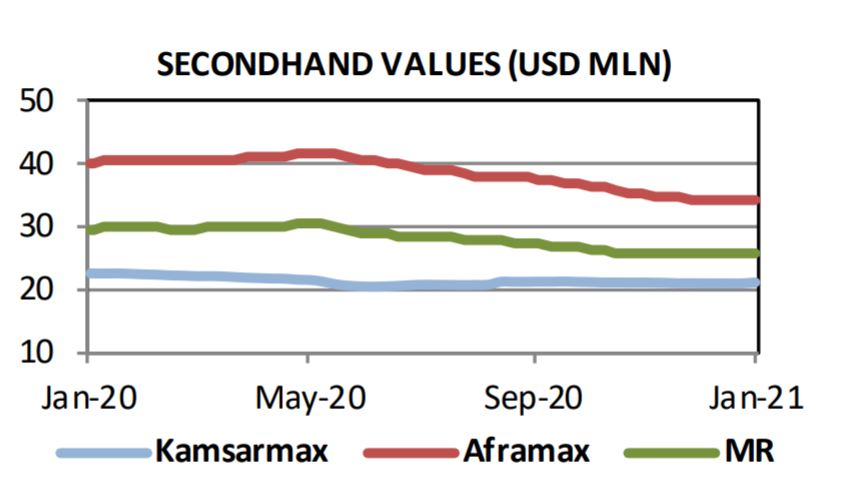 A vintage Handy bulkcarrier, Alerce N abt 29k blt 2001 Shikoku (BWTS fitted, log fitted) has been done at USD 3.75 million to Lebanese buyers. Back in November Fearless abt 30k blt 2001 Naikai (SS/DD passed) was sold at USD 4.2 million. In the tanker space, offers were invited on the 5th of January for a vintage VLCC Tsurumi abt 300k blt 2003 IHI. Seems she is now sold at USD 24.5 million. In the past week, Eagle abt 309k blt 2002 Samsung has gone at USD 25 million to Middle Eastern buyers. Two Japanese controlled MRs, Fs Sincerity abt 45k blt 2009 Iwagi and Opal Express abt 47k blt 2006 Iwagi were sold at USD 13.5 million and USD 9.75 million respectively”, the shipbroker concluded.
Nikos Roussanoglou, Hellenic Shipping News Worldwide