The ship recycling market is in a state of disarray, as tonnage availability has been scarce. Even when there are potential candidates, things aren’t quite that simple, as a result of a shortage of dollars in Bangladesh. In its latest weekly report, shipbroker Clarkson Platou Hellas said that “it is the start of the World Cup this weekend and all eyes are on Qatar as they are the host the first global football tournament in the Middle East, we expect this to be the most excitement recyclers will see for the next few weeks, as the market once again, can only be described as non-existent. This is despite, finally some positive news for the industry, with two Capesizes in the market now ready to be sold, but with them receiving very little interest. We have previously mentioned in reports that there is a shortage of dollars in Bangladesh, which has resulted in banks being unable to open Letters of Credit, this means all ships arriving to the Chattogram shores failing to be delivered. This has further pushed back any deliveries, with there now a queue of vessels now sitting outside the waterside, as it basically remains shut! It is hoped that India can save the market from its current malaise, with it now being the only ‘open’ recycling destination for tonnage and where the forementioned Capesizes are likely to deliver, if of course, the Owners are willing to consider the new lower levels. However, it is always a very reactive market, where sentiment can change quickly, but without a large volume of tonnage to destabilise this, we foresee a return to some positivity towards the end of the year”.

According to the shipbroker, “the Middle East has been the centre of attention this week, apart from the world cup, the Shipping world descended on Dubai for Bahri week. It was the biggest one yet, as Owners, Cash Buyers and Brokers all recognising the growth in the country over the past few years, it was a popular event for industry stakeholders to get together and discuss the global shipping markets. One thing for sure is that the boom in the Tanker markets looks set to continue well into next year and be the sector that starves the recycling industry”, Clarkson Platou Hellas concluded. 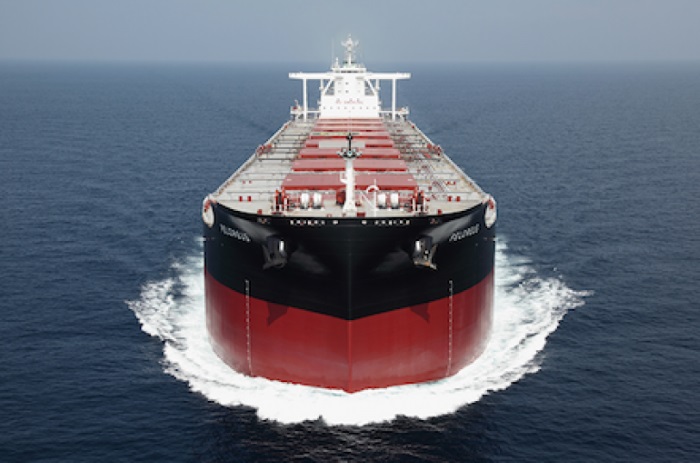 In a separate note, shipbroker Allied Shipbroking added that “things in the ship recycling market continued to move on the negative side for yet another week, with offered scrap price levels following a constant downward trajectory. On the Bangladeshi front, sentiment remains extremely weak due to the liquidity issues which continue to be faced and act as a major obstacle in allowing a fair amount of confidence to hold in order to support ample appetite. Pakistani breakers also appeared inert with regards to scrap activity with the weak domestic steel market leaving little room for breakers to act. For the time being, the market in the Indian Sub-Continent seems to be held by Indian breakers, who, given the lack of strong competition, have also stepped back considerably both in terms of offered prices as well as activity. At the same time given the collapse noted in local steel prices, there is little support to drive any improvement in offered numbers in the near term, something that could leave the market subdued for a fair amount of time”. 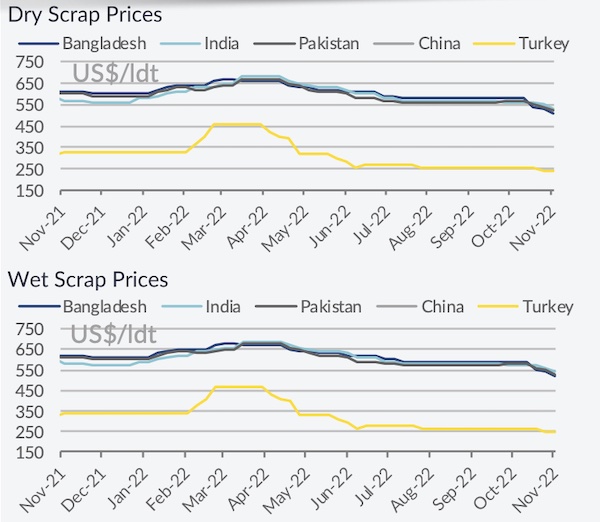 Meanwhile, GMS (www.gmsinc.net), the world’s leading cash buyer of ships said this week that “all recycling destinations across the Indian sub-continent and even Turkey have been suffering a prolonged and agonizing malaise over the past six months (at least), one that’s showing no sign of abating any time soon. In fact, prices have deteriorated even further this week at all sub-continent locations and receiving indications / offers – even in the USD 400s/LDT on small LDT units – is gradually becoming a reality. As such, any Ship Owner expecting some of the better levels (even from last week) will have to readjust their expectations much lower, in order to bring any sort of firm offer to the table.

L/Cs are continually proving to be extremely difficult to get approved these days, especially in Bangladesh, where the government is not sanctioning any fresh L/Cs for vessels, leading to a virtual standstill of the industry there. Indeed, we have seen multiple vessels enter the market and turn straight back around for trading (even at the reduced dry bulk and container levels of today), having either not found a Buyer with a ready L/C or having suffered embarrassingly low offers. The price ideas mentioned below are simply illusory, as the key thing today is finding a firm End Buyer at a reasonable level and with a workable L/C, which is turning out to be the most challenging of issues facing Cash Buyers at present. Overall, it is expected to be a dark and bleak winter for a withering ship recycling industry, especially after the decade long high in prices above USD 700/LDT whilst business boomed during the early part of this year”.
Nikos Roussanoglou, Hellenic Shipping News Worldwide