With vintage tonnage in demand, the ship recycling market is firing on all cylinders. In its latest weekly report, shipbroker Clarkson Platou Hellas said that “there appear to be conflicting reports from varied sources in the industry with some talking of a correction in India and Bangladesh, however others predicting the market to hold and continue in its current firm stance through the summer/monsoon season. Certainly, demand for steel remains strong and with the production line on the waterfront most likely to slow due to the monsoon season, we do not foresee any significant change to the current price indications, what with the lack of available candidates and the promising future sentiment in the steel industry Meantime, the Covid pandemic continues to affect particular regions of the industry at different times. Bangladesh announced a strict seven-day lockdown starting from June 28 after a dramatic surge in the Delta variant cases nationally with reports of an extension for a further period if the situation does not come under control. However, whilst banking activities have been affected, local Government offices closed, vessels arriving to the anchorage at Chattogram are being given inward clearances and subsequent beaching of vessels are taking place”, the shipbroker noted.

In a separate note, shipbroker Allied said that it was “another week with tanker tonnage leading the demolition activity, given the discouraging freight earning conditions still present in the segment and despite the traditionally quiet monsoon period. However, the lack of dry bulk and containership candidates are trimming overall activity, while the fresh COVID-19 concerns are expected to diminish business further. In Bangladesh, it was an impressive week with several units being sent for scrap in the country, with the firm steel prices playing a key role in this increased activity.

Nevertheless, the new enforced lockdown measures in the country may affect the scrapping activity in the upcoming weeks, despite the fact that most of port operations will remain open. In India, the previous week increased activity was not resumed, as both steel prices and the Indian Rupee lost some ground, curbing interest from owners with scrapping candidates. It is expected interest for the local market to remain subdued in the short-term. In Pakistan, the market remains firm with competitive prices, despite the decline noted in the number of deals last week. Meanwhile, it is worth stating that a new regulation came into force in the country, after the recent FSU accident, making restrictions about gas free conditions stricter”, Allied concluded. 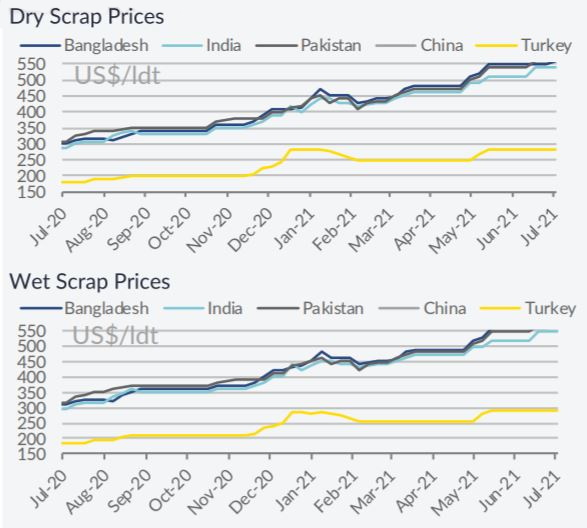 Meanwhile, in its latest weekly report, GMS (www.gmsinc.net), the world’s leading cash buyer of ships said that “far from the traditionally expected slowdown during the monsoon / summer months, sub-continent recycling markets fired on at pace once again this week, and a slowdown in the supply of tonnage of late is likely contributing to some overly aggressive offerings from hungry End Buyers. Steel plate prices in Bangladesh and Pakistan continue to firm, whilst India has cooled off and remains tentative on any fresh / incoming vessels, especially after a bullish last few weeks. Notwithstanding, there certainly must be a ceiling on proceedings as prices have doubled over the last year, reaching the ongoing unprecedented and crazy levels in the high USD 500s/LDT that seem like they are set to breach USD 600/LDT any time soon.

Not since the heady days of 2008 have we seen such consistently firm levels on scrap prices, and it will be interesting to see how much longer this trend persists, with many analysts predicting that this ongoing ‘super-cycle’ may be set to end at some point before the end of the year and that could eventually turn tumultuous at that time, for Ship Owners and Cash Buyers alike. Dry bulk and container rates continue to impress and as such, there are very few recycling candidates from these particular sectors on offer, especially as tankers and offshore units make up a majority of a rather limited supply at present. Covid-19 continues to present significant problems across the sub-continent markets and Bangladesh has once again gone into a hard lockdown, with offices closed and residents told not to leave their houses, to try and prevent the spread of the dangerous Delta variant of the virus”, GMS concluded.
Nikos Roussanoglou, Hellenic Shipping News Worldwide