The demolition market has reached new lows this week, with scarce activity being reported. In its latest weekly report, shipbroker Clarkson Platou Hellas said that “devaluations in all the currencies in the Indian sub. Continent have this week placed a heavy impact on the recycling industry with price levels noticeably taking a hit. All three destinations (Bangladesh/India/Pakistan) have witnessed further falls in price indications on the back of the current currency woes, in addition to a drop of the domestic steel prices. Reports suggest that any new vessel in the market would attract little interest as the local recyclers adopt a wait and see attitude. With the lack of units presently available, this current negative stance is not expected to continue for a long period. As we see freight markets continue to firm further in the dry sector and some of the wet areas, the lack of tonnage is sure to have a knock-on effect at the waterfront which hopefully will bring the recyclers back to the bidding table. The Turkish market has also suffered significant corrections on a negative manner with price levels back down to the USD 400/ldt level from the previous highs of the mid USD 400’s. Again, the weakening Lira and the local steel markets have affected sentiment from this destination”.

In a separate note, Allied Shipbroking added that “hopes that the ship recycling market would show signs of a recovery after the end of Bangladesh’s and Pakistan’s festive season appear to have collapsed, as the overall market performance this week appeared to have headed further south. On the pricing front, we witnessed a further drop in offered scrap price levels by all end buyers. Regarding Pakistani, Indian and Turkey, an important factor in the correction of scrap price levels has been the devaluation of their respective local currencies, which acts as a bearish factor of both currently running deals as well as any new deals that have only just emerged. 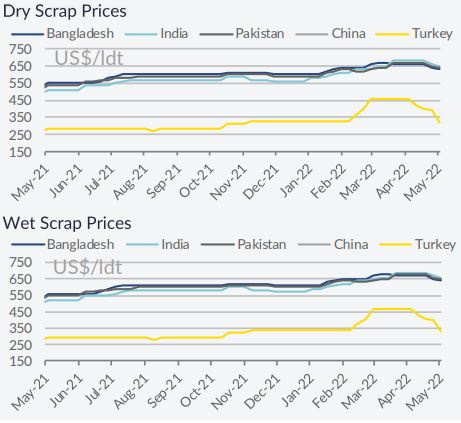 In addition, in India there seems to be a continuous decrease in the local steel prices which has also led to significant drop on end buyers’ margins. Bangladeshi breakers seem to have shown a more active face this past week, despite the fact that they are still trailing behind the rest of the Indian Sub-Continent in terms of offered price levels. Overall, despite the difficulties now faced in this market, given the fact that we are still facing a diminished pool of potential candidates across most of the major sectors, there is still a potential driver to keep offered price levels relatively buoyant and competitive”. 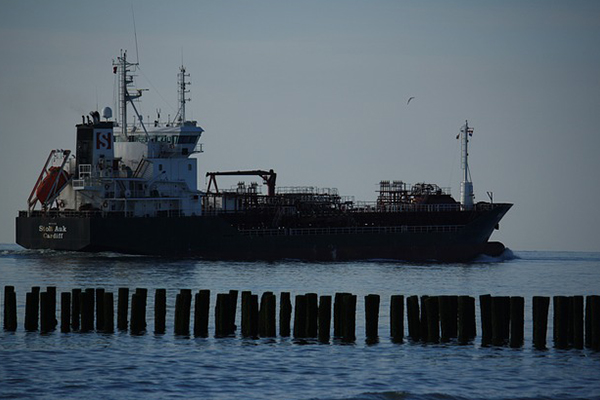 Meanwhile, GMS , the world’s leading cash buyer of ships, said that “it has been a woeful week across all of the major ship recycling markets, with some tumultuous declines leading to minimal interest and offers on any available tonnage. It increasingly seems as though it may be a much softer summer given prevailing sentiments, especially as prices ease back towards the (still impressive) USD 650s/LDT mark. Most of the deals concluded at USD 700/LDT (or above) were always seen as precariously positioned, and it remains to be seen whether End Buyers will be happy to dip back into the buying at these comparatively lower levels, given the global state of depreciating currencies and declining steel fundamentals.

The currencies in Pakistan, India, and even Turkey, remain much cause for concern to those domestic markets – especially as they continue to gradually trudge towards (or have already passed) record highs agains the U.S. Dollar. Steel plate prices have also suffered severely in Turkey & India with India down by almost USD 45/LDT over the course of the last couple of weeks and Turkey down by about USD 120/Ton, as these markets continue their beleaguered run week after week, leaving End Buyers at these locations extremely reticent to offer on fresh tonnage. Turkey remains the worst placed with a USD 90/MT plummet in levels post-Eid. Even (ex-market leaders) Bangladesh remain on the sidelines post-Eid and there is little hope of receiving any serious offers any time soon from either market who appear down and out. In keeping with global stock markets this past week, all major global recycling markets remain decidedly nervy and seem only to be heading down”, GMS concluded.
Nikos Roussanoglou, Hellenic Shipping News Worldwide