The demolition market has remained on a downward path this week, with recyclers offers declining and ship owners refraining from more deals. In its latest weekly report, shipbroker Clarkson Platou Hellas said that “the mood in the market slipped further this week as the depressive state continued with domestic price levels in the Indian sub. Continent showing no signs of a reversal. There appears to be a total lack of confidence from the actual recyclers with the appetite from India remaining relatively damp, and Bangladesh showing no willingness to offer for tonnage whilst their yards remain full of previously acquired tonnage due to the severe monsoon rains hampering any cutting process. With the freight markets across all the major shipping sectors trading at relatively healthy levels during these summer months, the result is that the lack of tonnage currently being witnessed in the recycling market looks set to continue which is a fortunate scenario. If we had seen a vast supply of tonnage hitting the market for sale, then surely we would have seen levels dropping to catastrophic numbers. Let’s hope that a change in sentiment on the waterfront arrives before we see a sudden surge of tonnage availability”. 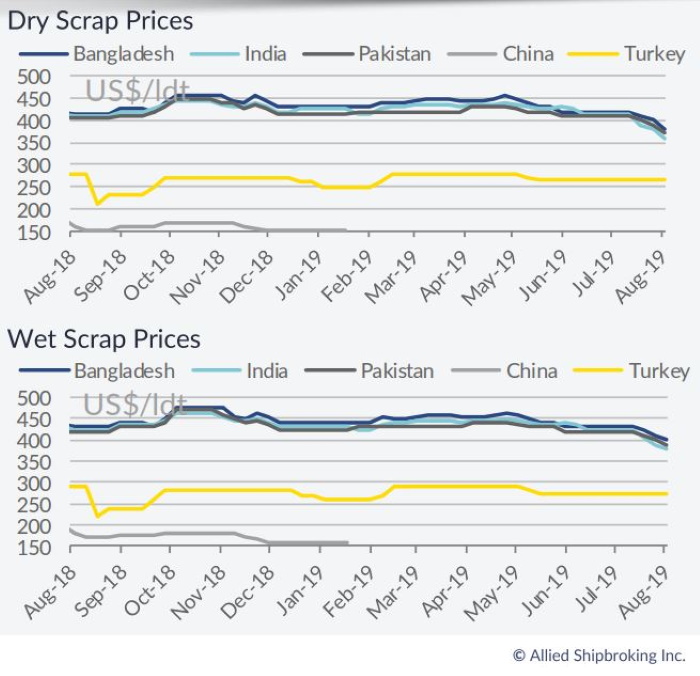 Meanwhile, in a similar report, Allied Shipbroking added that “we can’t say that many things have changed in the ship recycling market during the past week. The rather “typical” sluggish mood of the summer period is currently evident, with just a handful of transactions taking place the past few days. A this point, we can point with confidence that things in the Indian Sub-Continent are rather bearish. Bangladeshi buyers are seemingly preoccupied with the high inventory, India is losing ground, given the downward spiral of the local steel plate prices, while Pakistan is apparently in the best position to take the lead for the time being, but still lacking the drive. Given the current state in the Indian Sub-Continent, it is very interesting to see if the Turkish market can take this opportunity to narrow its pricing gap. All-in-all, with all that being said, the current expectation is for things to remain lackluster for the next couple of weeks or so”, the shipbroker concluded. 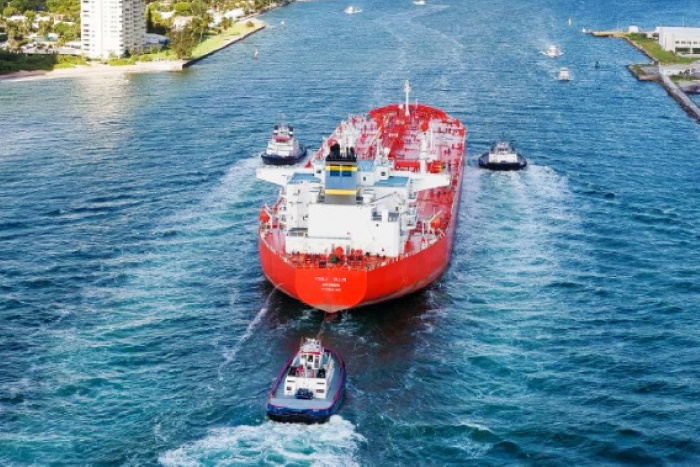 In a separate note, GMS, the world’s leading cash buyer of ships said that “following significant declines in various fundamentals over the summer / monsoon months at each location, all subcontinent markets are now offering on units, in the mid-to-high USD 300s/LDT. Indian steel plate prices have been affected the worst, declining by at least USD 55/LDT over the month of July alone and coupled with seasonal elements & subsequently decreasing demand, this has seen levels plummet by about USD 60 – USD 70/LDT, leaving Alang as the lowest of the subcontinent locations. Indeed, it is proving increasingly difficult to solicit any firm numbers out of any market at present, with Eid holidays just around the corner in Pakistan & Bangladesh and Buyers reticent to quote any firm levels in India for the time-being. Amidst the chaos, Cash Buyers are left holding the bag with a number of high priced unsold units, which they may now look to hold onto for a short while, at least until the much expected pick-up in pricing from the fourth quarter of the year comes around. The overall industry is certainly hoping that Bangladesh returns to the fore with some vigor after the Eid holidays, as this has been the go to market for decent sized tonnage through much of 2019. Yet, their return is largely dependent on the BSBA’s ability to overturn the 5% VAT increase, which has seen prices fall by about USD 30 – USD 35/LDT. Bangladeshi recyclers also need to clear out a lot of the existing inventory that is currently occupying local yards and has been extremely slow to shift due to the constant rains / flooding. Pakistan has been creeping back with increasing enquiries emerging over the recent weeks. However, after over a year on the sidelines, it is becoming increasingly difficult to get Gadani Buyers to commit on fresh candidates at anywhere near sensible levels for the time being”, GMS concluded.
Nikos Roussanoglou, Hellenic Shipping News Worldwide