Ten years after the adoption of IMO’s Hong Kong Convention for the Safe and Environmentally Sound Recycling of Ships, in May 2009, there has been progress with voluntary application of its requirements, but the treaty needs to enter into force for it to be widely implemented. “I urge Member States who have not yet done so to ratify the Convention at the earliest opportunity, in order to bring it into force as soon as possible,” said IMO Secretary-General Kitack Lim, speaking at an International Seminar on Ship Recycling: Towards the Early Entry into Force of the Hong Kong Convention (10 May). The seminar was organized by the Ministry of Land, Infrastructure, Transport and Tourism (MLIT) of Japan in cooperation with the IMO Secretariat. 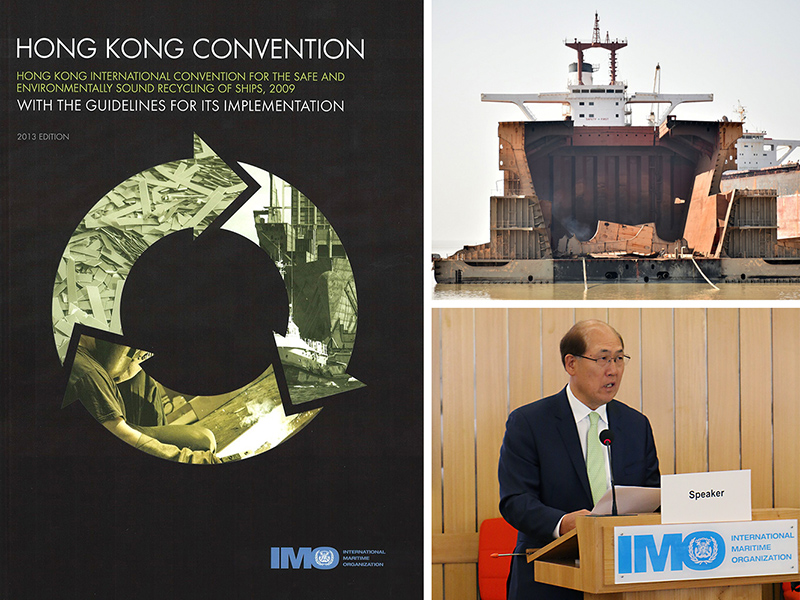 Speakers from industry and national authorities, including ship recycling countries, are addressing the seminar, which aims to highlight how to promote sustainable ship recycling and discuss what is necessary to move forward for the early entry into force of the Hong Kong Convention.

The Hong Kong Convention covers the design, construction, operation and maintenance of ships, and preparation for ship recycling in order to facilitate safe and environmentally sound recycling, without compromising the safety and operational efficiency of ships. Under the treaty, ships are required to carry an Inventory of Hazardous Materials, specific to each ship. Ship recycling yards are required to provide a “Ship Recycling Plan”, specific to each individual ship to be recycled, specifying the manner in which each ship will be recycled, depending on its particulars and its inventory.

Secretary-General Lim highlighted the work already done by IMO to develop guidelines to assist in implementation, with a range of awareness-raising workshops, training and other similar projects, to help build capacity in ship recycling countries and establish the conditions that will enable those which have not yet done so, to ratify or accede to the Convention. In particular, the ongoing project on “Safe and Environmentally Sound Ship Recycling in Bangladesh” (SENSREC), funded by the Government of Norway and jointly implemented by IMO, the Government of Bangladesh and the Secretariat of the Basel, Rotterdam and Stockholm Conventions (BRS), is in its second phase, focusing on building the country’s institutional capacity and implementing the training materials based on Phase I. Meanwhile, the Government of Japan has been working with relevant stakeholders to improve ship recycling in South Asia.