“We have been overjoyed to see so many passengers traveling to Tallinn, Stockholm and Travemünde during the summer season in particular. The international cruise season, which will end in October, has also been active. Interest in travel is once again on the rise after COVID,” says the CEO of the Port of Helsinki Ville Haapasaari.

“At present, passenger numbers are approximately 20% lower than in 2019. It remains to be seen whether the difference will be made up during the remainder of the year.” 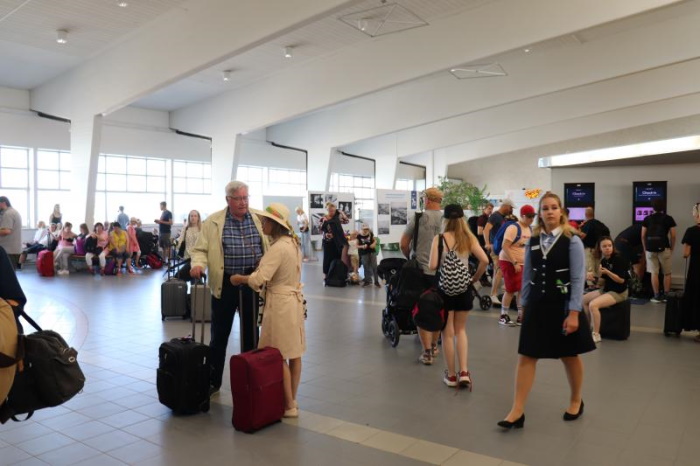 The renovation of the Olympia Terminal, which turned 70 this summer, brought more light and space to the departure lounge in keeping with its original atmosphere.

The number of liner traffic passengers in Helsinki in January–July was 4.5 million. The change from the same period in the previous year is +203%.

The route with the highest passenger numbers has been Helsinki-Tallinn with a total of 3.5 million passengers in January–July. The number of passengers recorded on the Stockholm-Helsinki route during the same period was nearly 790,000.

Cargo volumes on track to break records
Goods are currently being transported via the Port of Helsinki at a record-breaking pace.

Unitised cargo traffic* amounted to 7.5 million tonnes (+7.2%). Measured in tonnes, container traffic increased by 0.4% from the previous year, while rubber-wheeled traffic** increased by 10.2%. 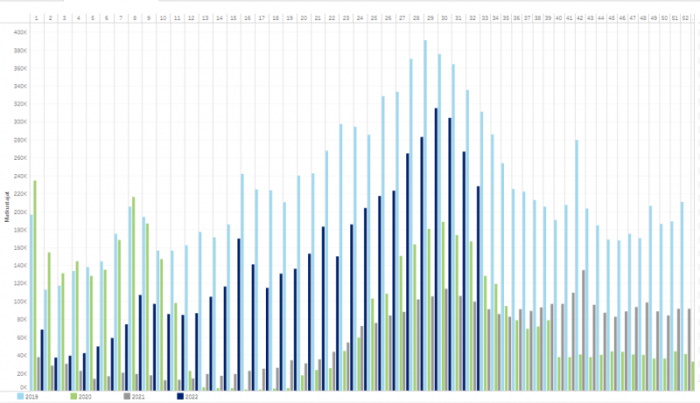 Challenging times ahead
Increased transportation costs, challenges in cargo traffic delivery chains and the effects of the war in Ukraine on general economic developments are presenting challenges to the Port of Helsinki’s operating environment as well. However, the development of cargo traffic has remained positive so far despite the darkening general economic outlook.

The development of the port’s liner traffic and passenger numbers in the remainder of the year will be affected not only by international challenges, but the sale and leasing of ships abroad as well. Viking Line recently sold the M/S Amorella and is currently re-evaluating which ships it will operate on the Helsinki-Stockholm route going forward. Meanwhile Tallink Silja has leased out the Silja Europa, which is expected to return to regular operation in spring 2023. A positive development this autumn will be the start of Tallink’s new ship MyStar’s operation on the Helsinki-Tallin route.

“The recovery of passenger numbers to pre-COVID levels will most likely take a few more years and depends on how quickly international tourism recovers,” Haapasaari estimates.
Source: Port of Helsinki Ltd

2022-08-17
hellenicshippingnews...
Previous: SINGAPORE DATA: July bunker sales up 9.8% on month, highest level of year to date
Next: Port of Roenne A/S is certified according to the UN’s global goals as the first port in Denmark