The US administration recently proposed the implementation of 25% and 10% import tariffs on steel and aluminum in an effort to support production of metals at home. Critics claim that the increased cost of importing resources will likely be passed along to the consumer and businesses, negatively impacting economic growth; however, supporters believe this is a necessary step towards “America first” policies and revitalizing US industry. It remains unclear how these policy changes will impact prices; however, regarding the tanker market, a rise in global steel prices could prove beneficial to the rebalancing efforts. February steel prices are estimated at US $427.50/ldt after rising 30.3% through 2017, which in conjunction with the less than favorable earnings environment has contributed to the recent rise in vessel deletions (Figure). However, one possibility of the tariffs would be the lengthening of the steel balance in Asia, due to lower exports to the US, and pressuring of steel prices. Perhaps this is one reason for the fast pace of VLCC deletions this year. 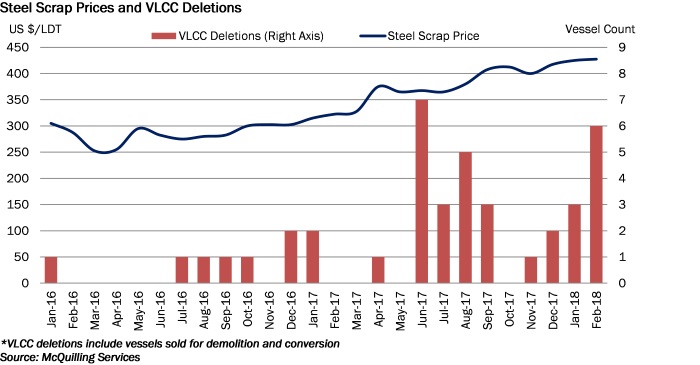 In the broader picture, some concerns remain in the US administration’s approach to global trade as the tariffs have spurred back lash from foreign nations. In the past, China has been accused of “dumping steel” in the US and pressuring regional pricing, therefore, many would likely view this policy change as a targeted towards the Far East nation; however, China only accounts for 2% of US steel imports and has thus far reacted with caution stating that it will not start a “self-defeating” trade war. Rhetoric from Europe was more aggressive with the European Commission stating it would consider policy change in reaction to the tariffs. With the two entities threatening additional tariffs, concern of a trade war has risen, which would not only pressure political ties, but the exchange of goods across the Atlantic Ocean. It remains unclear if tensions will reach that point as all eyes wait for the tariffs to be implemented and a reaction from Europe.
Source: McQuilling Partners, Inc.