CONFIDENCE CLIMBS TO 18-MONTH HIGH
In November 2019, the average confidence level expressed by respondents was 6.4 out of 10.0, compared to 5.8 in August 2019. This is the highest rating since the same level of confidence was recorded in May 2018, and it is necessary to go back to February 2014 in order to see confidence at a higher level. Confidence on the part of managers and owners was up to 6.9 from the levels recorded in the previous survey of 5.9 and 6.4 respectively. But confidence in the broking sector was down from 5.1 to 3.9, the lowest rating for this category of respondent since the survey was launched in May 2008. Confidence was down in Asia from 6.8 to 6.0 but up in Europe and in North America from 5.7 to 6.2 and from 4.3 to 6.8 respectively.

SURVEY ANALYSIS
The likelihood of respondents making a major investment or significant development over the coming year was unchanged from last time at 5.5 out of 10.0. Owners’ confidence was down from 6.5 to 6.3, while that of brokers dropped from 4.4 to 2.9. Meanwhile the expectations of managers held steady at 6.1.Expectations were down in Asia and in Europe, from 6.6 to 5.7 and from 5.4 to 5.1 respectively. The number of respondents expecting finance costs to increase over the coming year was up from 25% to 37%. Whereas 57% of managers (up from 20% last time) anticipated dearer finance over the next 12 months, just 32% of owners (albeit up from 27% last time) thought likewise.

Business performance factors
Demand trends was the factor expected to influence performance most significantly over the next 12 months, then followed, as last time, by competition and finance costs.

FREIGHT MARKETS
The number of respondents anticipating higher tanker rates over the coming year was up from 43% to 46%, with little or no movement in the expectations of main respondent categories compared to the previous survey. In the dry bulk sector, overall expectations of rate increases were up from 39% to 50%, and in the case of brokers alone from 20% to 71%. The numbers expecting higher container ship rates, meanwhile, rose by 10 percentage points to 29%. Net rate sentiment was positive in all three main tonnage categories. 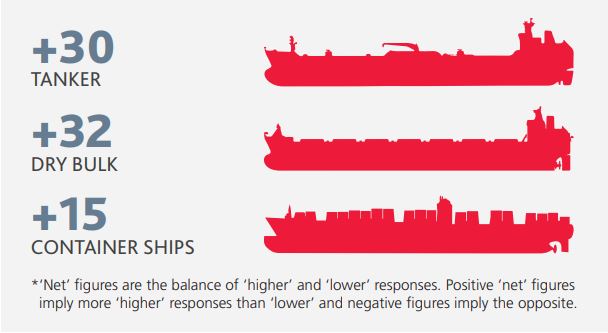 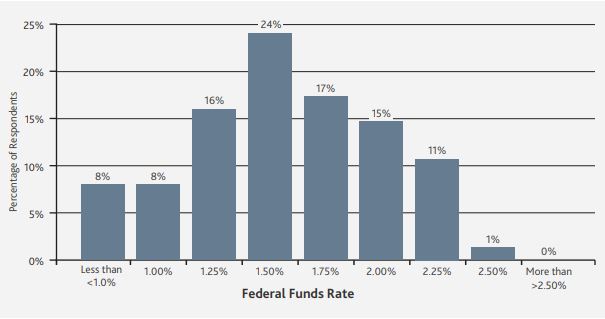 CONCLUSION
Despite general ongoing geopolitical uncertainty, and notwithstanding specific concerns about a variety of issues including Brexit, and President Trump’s impeachment inquiry, confidence in shipping rose to its highest level for 18 months in the quarter under review. It is not far short of six years since confidence in the industry has been higher, and appetite for investment remains steady despite volatile economic conditions. Shipping is not for the faint-hearted, and committed long-term players remain the most likely to achieve the best returns. Our latest survey revealed an increased expectation over the next 12 months of dearer finance costs. Such costs remain one of the most significant performance-influencing factors for our respondents. But the cost of regulatory compliance is slowly gaining in importance, and will continue to do so. IMO 2020 was recently categorised by one commentator as a ‘perfect storm’ for litigators. It is also part of a much larger commitment by the shipping industry to enhancing its green credentials, and in the process becoming a more technologically advanced and environmentally responsible sector. As such, it should be eminently attractive to investors.
Source: BDO