Shipping container rates have spiked by as much as three or four times since the onset of the pandemic and are likely to remain elevated beyond the Lunar New Year in 2022 as the global demand for goods continues to outpace available capacity.

And even when the demand starts to ease, participants on a webinar hosted by online freight shipping marketplace and platform provider Freightos said that container rates are unlikely to return to their previous levels.

“I have been in this business for 20 years, and $4,500 was the previous high I had seen for a container from Asia to the US West Coast before the pandemic,” said panellist Robert Khachatryan, founder and COO of shipping forwarder Freight Right Global Logistics.

“I think that will be the new floor,” he added. “Maybe even above $5,000. I think that could become the new market rate.”

HOW WE GOT HERE

While most chemicals are liquids and are shipped in tankers, polymers such as polyethylene (PE) and polypropylene (PP), which are shipped in pellets, are moved by container ships.

Container ships also carry a wider scope of cargoes, including consumer products like electrical appliances and automobiles, so demand for that space has risen as economies reopened after lockdown measures because of the pandemic.

The spread of the coronavirus pandemic – and the lockdown measures initiated to help mitigate it – led to a surge in demand for goods.

Consumers who were able to work from home found themselves with extra money since they were limited in how they could spend it.

Container shipping has a peak season for goods from Asia to the US – from about July to October – but the added demand kept volumes above typical peak season levels.

“The impact was that all of these containers overwhelmed the capacity of the ports to process them,” Levine said.

He added that the port backlogs essentially sucked up all of the available capacity in ships and containers.

“All of the world’s container ships are active right now,” Levine said, explaining that shipowners typically have extra capacity that they can bring online for peak times. “In the current situation, there is no extra capacity, which is putting pressure all along the supply chain.” 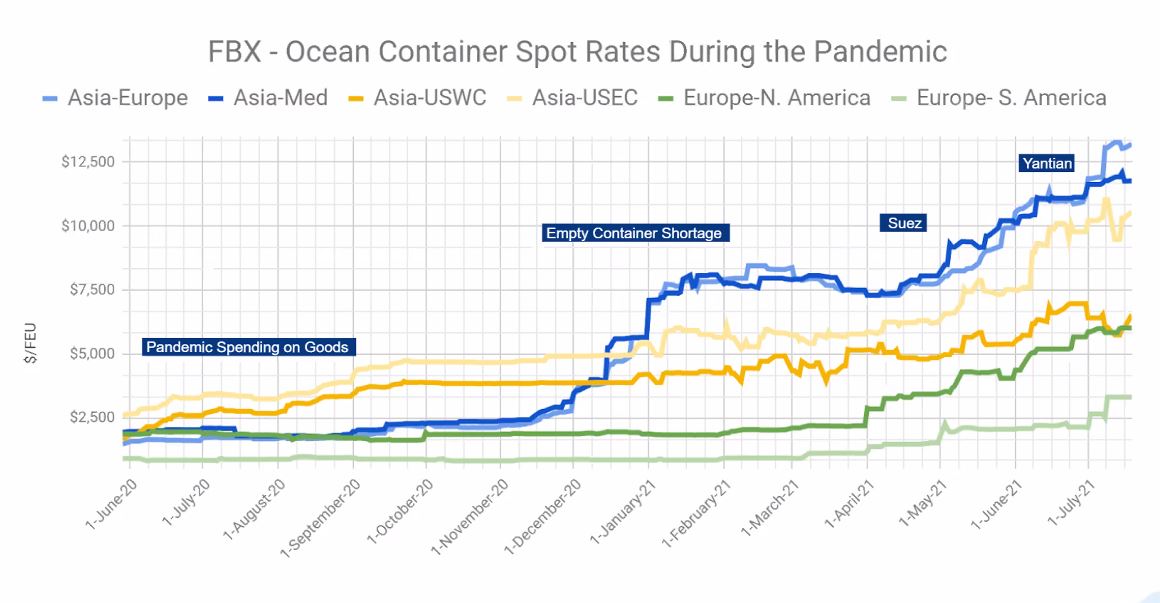 Rates began to spike in Q4 2020, driven by the shortage of containers, and after some easing, shot up again when the Ever Given became lodged in the Suez Canal.

Rates continued rising recently when an outbreak of COVID-19 infections at the port of Yantian, one of China’s busiest container ports, led to lengthy delays at the port and added additional strain to the network.

The increases in container rates have been particularly hard on Latin American markets, where resin producers have seen eroded margins because of the increased costs, which they have been unable to pass through to customers in many cases.

A market participant that imports polyvinyl chloride (PVC) from China to South America told ICIS it was quoted rates for end-July of $6,900/20-foot container from India to Argentina.

“The freight rates that you have mentioned align with what we are seeing in the market as well,” the market participant said.

“Spot rates are around $9,000-10,000/container, and even then, availability is not confirmed. Freight rates from Europe to US East Coast is also at similar levels,” the market participant said.

DEMAND TO REMAIN ELEVATED ON RESTOCKING

The panellists agreed that because of the various supply chain issues experienced this year, many businesses are running with limited inventory.

Efforts to restock barren warehouses are likely to keep demand elevated beyond this year’s peak season. 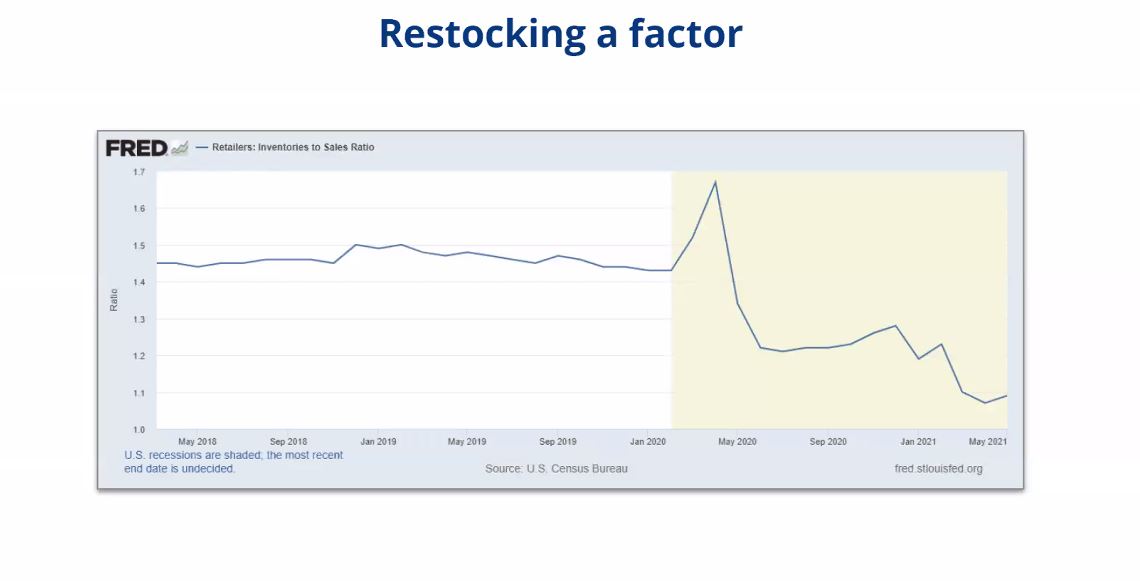 Khachatryan said that because of delays in receiving goods this year, some importers and exporters are ordering and scheduling shipments earlier than before.

He said he is seeing Christmas related items already being shipped when previously they would not be on a vessel until August or September.

“Next year we expect to see customers start ordering even earlier,” he said.

Ruthie Amaru, Freightos CEO, said it is more important than ever to look for different options for sourcing goods and to be flexible with the modes of transportation.

For example, while it would have never been cost effective prior to the pandemic to ship goods via air freight, now that container rates have spiked the gap has narrowed.

Add to that demurrage charges (a charge payable to the shipowner for failure to load or unload a ship within the agreed time frame) and the gap between rail and air could make more sense.

LIQUID TANKERS DIRECT OPPOSITE TO CONTAINERS

While container ships are facing severe shortages and price spikes, the liquid chemical tanker market is facing the opposite extreme with quite a slowdown in activity, particularly since the winter storm in February that shut much US Gulf Coast production.

“No one clearly knows what is going to happen for liquid tankers, and the more we think it is coming back, the more it is being pushed further and further away,” said one shipping broker.

After the winter storm, chemical production was at a low, and exports of product from the US slipped further.

For the remainder of Q3 and into Q4, the biggest factor that could cause a similar outcome is hurricanes. While chemical production slowly rebuilds and product becomes more available, even one significant hurricane can cause severe disruptions and declines in the tanker market.

“Other than a hurricane, I don’t think anything else can be bring this to a worse place than where we are currently,” the broker added.
Source: ICIS by Adam Yanelli and Anna Matherne https://www.icis.com/explore/resources/news/2021/07/20/10665185/outlook-shipping-container-rates-to-remain-elevated-into-2022-as-us-demand-outpaces-capacity

2021-07-22
hellenicshippingnews...
Previous: Oil climbs over 4% despite rise in U.S. inventories
Next: Preferred stock in the shipping sector