With the shipping industry gradually expected to move towards cleaner fuels, ordering a newbuilding vessel today can be a very difficult “exercise” from a compliance and financial point of view. So what are the options that ship owners have opted to choose? In its latest weekly report, shipbroker Gibson said that “decarbonisation talk appears to be everywhere nowadays – on a government level and in a plethora of industries. Last year saw several international agreements reached during COP26 as well as European Union proposals to include shipping in their emissions trading scheme. The IMO agreed on short term measures for decarbonising shipping, including the Carbon Intensity Indicator (CII) and the Energy Efficiency Existing Ship Index (EEXI). Shipping companies are not immune to these pressures, with many trialling/implementing innovative options, be it alternative fuels, air lubrication, rotor sails, voyage optimisation, carbon offsets, etc”. 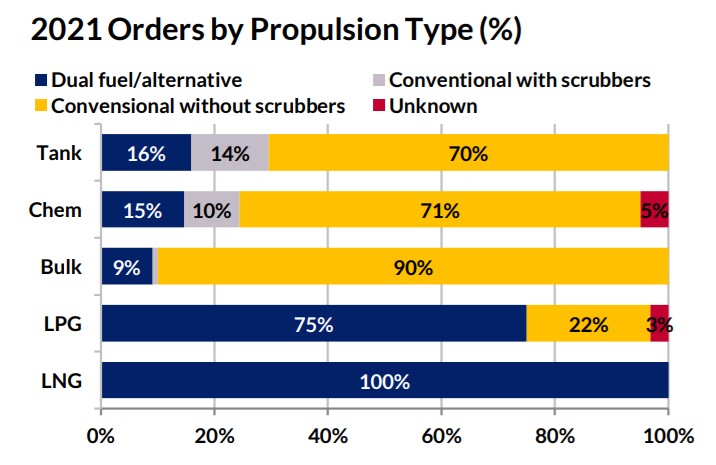 According to Gibson, “when it comes to ordering new tonnage, uncertainty remains on the best long term propulsion solution and each sector is responding differently, depending on the specifics of their trade. In deep-sea merchant shipping, the most clarity over newbuilding choice appears to be in the LNG/LPG segments, which saw a surge in orders last year. Almost all existing LNG carriers are already dual fuel. For LPG carriers, this is a relatively new trend, with dual fuelled vessels accounting for 75% of 2021 orders. Of course, technological, and practical considerations mean that these sectors are most capable of operating with dual fuelled engines, essentially due to the type of cargo they carry”.

The shipbroker noted that “the uptake of dual fuelled engines is also gaining pace in the container industry, supported by a colossal increase in newbuilding appetite. Last year saw a significant number of orders for LNGfuelled containerships, with this choice supported by growing LNG bunkering infrastructure and the predictability of routing, enabling efficient bunker planning. Although there are concerns about the environmental credentials of LNG due to methane slip and life cycle emissions, another advantage of LNG propulsion is that both bio-LNG and synthetic LNG could be used as ‘drop-in’ fuels, if in the distant future there are restrictions on use of LNG as a fuel. For example, in the EU’s proposed Energy Taxation Directive, LNG will have an advantage over conventional bunker fuels only for a transitional period, indicating that the block does not currently see it as a long-term sustainable option. Some new containerships are opting just for the LNG-ready notation, which enables vessels to be later retrofitted to LNG fuelled engines. A.P. Moller-Maersk, in contrast to many of its peers, has decided against LNG and instead ordered 8+4 dual-fuelled container vessels capable of running on methanol. While interest in LNG as a fuel is certainly on the rise, the sector is yet to come to a consensus as to whether or not LNG is the way forward, with orders for conventional engine with exhaust gas cleaning technology still being one of the most popular choices”. 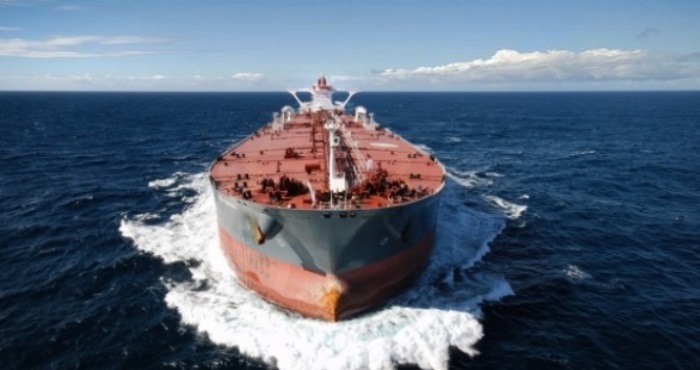 “The dry bulk sector also appears to have made its choice, following a similar surge in orders, with conventional tonnage accounting for the overwhelming majority of 2021 orders. For tankers, there is less clarity. Investment in new tonnage has been very limited, due to depressed earnings, increases in newbuilding prices and questions around long term oil demand. The early part of 2021 saw some interest in alternative propulsion, with a number of LNG fuelled vessels being ordered, almost entirely in the larger crude segment. However, the overall trend points in a different direction. Nearly 85% of all tanker orders placed last year are for conventional propulsion, although there is still a healthy appetite for scrubbers. Some vessels have also been ordered with an LNG-ready notation and even with ammonia-ready notation. Surging LNG prices and higher premiums for dual propulsion may have deterred some interest. However, as with bulkers, the fact that most tanker orders are for conventional tonnage suggests that there is still confidence in existing new vessel designs with conventional propulsion which are considerably more fuel efficient relative to an average 10-year-old vessel. Whether this remains the case is yet to be seen. The finance industry now holds substantial portfolios of more environmentally friendly assets, and we can only speculate that financiers potentially could be more willing to push for a greener dual fuel tanker instead of a conventional type of ship”, Gibson concluded.
Nikos Roussanoglou, Hellenic Shipping News Worldwide