Day Two of Sea Asia 2019 concluded with a panel where shipping leaders discussed fleet management of the future, and explored how shipowners will adopt digitalisation to truly optimise their fleet operations.

The discussion covered the potential of digitalisation to unlock improved efficiencies and better decision-making for the maritime industry.

Automation was a key theme for the session, where the panel addressed the question on whether complete automation of ships is near. The panel unanimously agreed that complete automation will not be seen in the near future, but instead we are likely to see autonomous technologies complement human operations. The panel highlighted that digitalisation will result in a more connected, highly autonomous but still human-centred operation. 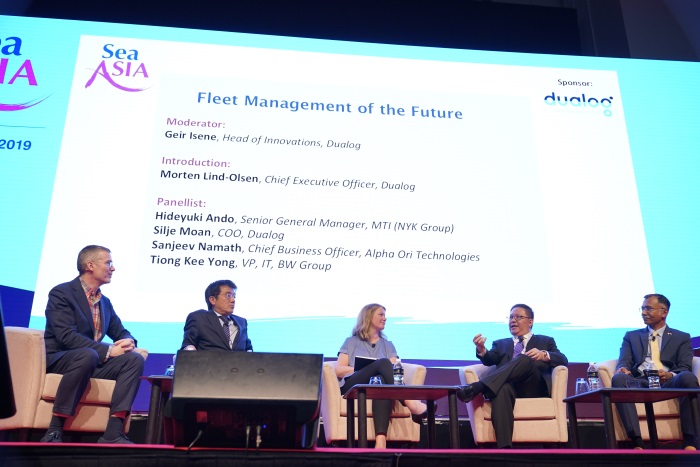 Ms Moan added that automation should not be the end goal in itself, but businesses need to instead focus on their business goals and how to best deliver for their customers, and from there see how automation fits into the bigger picture.

Another theme was the need for collaboration at all levels, and in all sectors of the maritime industry, to truly utilise the potential of big data. The panellists agree that collaboration must go beyond sea to shore, and extend from the ship to manufacturers or engineers so that true operational improvements and productivities can be achieved.

Mr Namath added that using real time data in meaningful business applications can be developed to improve productivity, efficiency and mitigation of losses. He said that ultimately digitalisation is not an option anymore, it is a question of survivability for the industry.

With all of this potential, the panel recognised that there are some intrinsic factors of shipping that make digitalisation challenging, such as the limited space and power on a vessel, and network connectivity lapses out at sea. The duration ships are at sea in any given voyage also means technicians will have a hard time accessing the vessels.

In addition, with this networked environment other risks become apparent, such as cyber security, which Ms Moan believes needs to be considered at the very beginning of the digitalisation process, and not as an aside.

The panellists agreed that creating an echo-system for data-sharing among the industry will be important in the future, but they recognised the challenges in doing this without the development of regulations and standards in which to share information.

Ultimately, the panel concluded in acknowledging that the future of fleet management is in digitalisation, transparency and collaboration.
Source: Sea Asia 2019