The International Maritime Organization (IMO), the industry’s regulator, will require all ships to reduce the level of sulphur in their engine emissions from 3.5% currently to 0.5% or less from 1st January 2020.

It may seem an arcane rule change, but the ramifications ripple right across the oil value chain. Crude producers, traders, refiners and consumers will all be affected as well as the shipping industry. The story is complex. So I asked Alan Gelder, Head of Oils Analysis, to tell me what I need to know.

Is IMO 2020 a progressive environmental regulation?

Yes and no. The limit reduces the sulphur dioxide (SO2) from fuel burn emitted into the atmosphere through the ship’s funnel. There will be a lot less SO2 that finds its way into the air. So far, so good. Yet the new regulation isn’t holistic. Two problems stand out. Many ships will comply by investing in scrubbers that strip the sulphur out of the exhaust. There is a serious concern that this diverts air pollutants directly into the sea. The other issue is that the regulation places no obligation on refiners to extract the sulphur at source.

Can refiners deliver the new fuel just like that?

No. Shipping consumes 3.5 million b/d of high-sulphur fuel oil (HSFO, sulphur content capped at 3.5%). Refiners globally will be able to deliver 1.5 million b/d of VLSFO (very-low sulphur fuel oil, capped at 0.5%) by our reckoning. HSFO demand will be sustained by those vessels that have invested in scrubbers, as well as some non-compliance (estimated at around 10% in 2020). While this includes some shippers that are prepared to cheat, (particularly in markets with more limited port state control inspections), non-availability and non-compatibility of VLSFO could also lead to some shippers continuing to use HSFO in the initial period of implementation. That leaves around 1 million b/d looking for marine gasoil (similar to diesel) which is more expensive – so shippers will pay more for their fuel.

What are the implications for crude feedstock?

Price differentials will widen. There will be two extremes. High-sulphur ‘sour’ heavy oils, the traditional feedstock for ship bunker fuel, suddenly loses its core market. Many of these crudes come from the Middle East. At the other end, sweet crudes – more easily refined into low-sulphur fuels – will be in demand. That’s great news for a big producer like Brazil.

Will crude prices be affected?

Yes, but we don’t think there’s much impact on the key markers like Brent. We’d expect the differentials for Dubai/Brent to blow out from a recent discount of US$1/bbl to over US$3/bbl. Sweeter crudes can expect a premium to Brent.

And winners and losers in refining?

Arguably, refining generally is boosted because the IMO regulation creates more demand for higher quality and higher value products. But some are much better placed than others. Sophisticated refiners that can buy discounted sour, heavy crudes and produce transport fuels, including diesel and VLSFO, will be in the money. A lot of US Gulf Coast refineries are set up this way, as are some Asian refineries, including new builds in India and China. Those which are challenged include Middle East NOCs – which are long on production of sour, heavy crude relative to their refining capacity. Another point to bear in mind is that shipping freight rates will go up because of higher fuel costs, pushing up prices for any goods transported by sea.

Are we seeing prices move in anticipation?

Markets have been surprisingly sanguine, considering the disruption coming. Fuel oil prices have been very volatile in the last month or two, but the picture has been confused by the September Abqaiq attack that distorted Saudi crude runs and HSFO trade. Fuel oil has been getting cheaper, but the strength in the diesel price starting to appear. The economic slowdown, notably in China, is dampening diesel demand and this affects pricing. As we move through Q4, we expect that the spread between fuel and diesel will widen further. 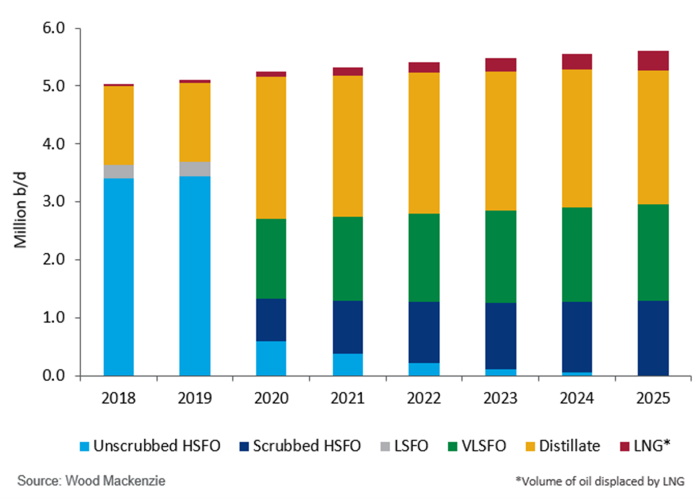