Shipping number of the week: Chinese steel production declines for the first time in 21 months

Chinese steel production dropped by one million (1m) tonnes, a decline of 1.2%, compared to October last year. China produced 81m tonnes of crude steel in October 2019. This is the first decline in steel production year-on-year since December 2017.

The story unfolds quite differently when looking at the accumulated volumes of crude steel production. In total, China has produced 829m tonnes of crude steel through the first 10 months of 2019, an increase of 6% when compared to the same period last year.

In fact, total steel production, in accumulated volumes, has been growing consistently since 2014, whereby steel production in 2019 is set to follow along the same trajectory with increased output y-o-y.

Slowing Chinese GDP growth and heightened focus on environmental pollution could partly have driven the recent slowdown of steel production.

The Chinese steel production tends to taper off towards the end of the year, whereby production in the final quarter is consistently lower than in the third quarter. October’s decreased steel production might indicate that a similar slowdown could be expected in the fourth quarter of this year. 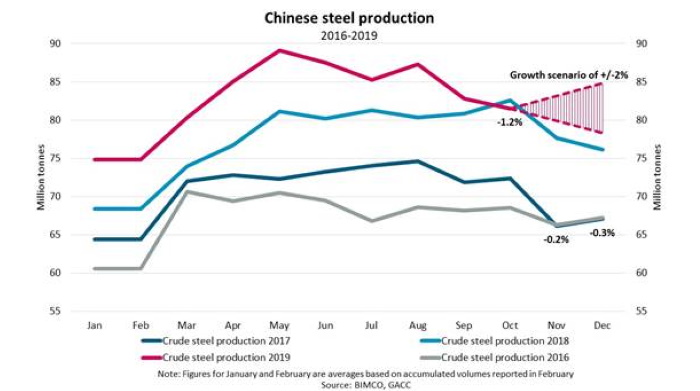 What is in it for shipping?

In the past, increasing Chinese steel production drove up iron ore imports, in turn, contributing to demand for dry bulk shipping. However, as BIMCO has previously reported, the Chinese steel mills are increasingly substituting iron ore with domestic scrap steel, negatively impacting the demand for Capesize transportation.

While the Chinese steel mills are producing record breaking amounts of crude steel, the growth rates for iron ore imports have remained in negative territory for the past 20 months. China has imported 877m tonnes of iron ore through the first 10 months of 2019, an impressive amount indeed, but still down 1.6% in accumulated volumes y-o-y. A slowdown of Chinese iron ore imports will surely negatively affect the Capesize segment.

The Capesize freight rates have remained profitable in the last two quarters on the back of increased Brazilian iron ore exports. However, in November 2019, the freight rates dipped towards 20,000 USD per day and have since hovered around this level. 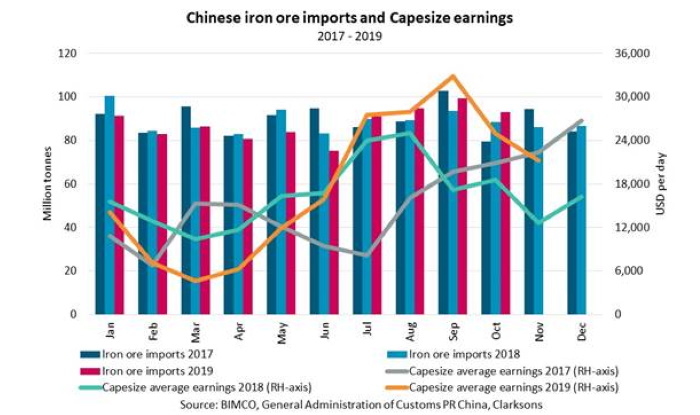 Previous: China continues to diversify away from US LPG
Next: Older Tonnage Could Be Headed for Scrapping, Ahead of the IMO 2020 Rule