When U.S. President Donald Trump fired the first salvos in his trade war with China, the market for hauling bulk commodities that power the Asian country’s economy responded with a surprising surge. Now shipowners are losing their swagger. 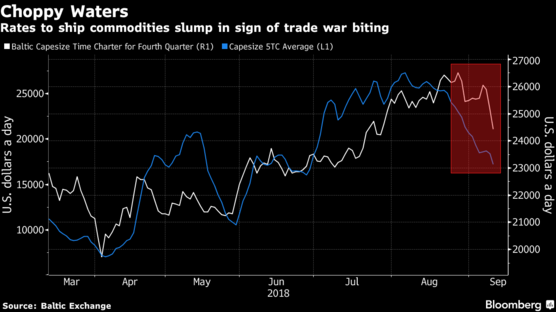 “Some of the weakness we have seen in dry bulk freight rates can to some extent be attributed to growing uncertainty around the trade war,” said Peter Sand, chief shipping analyst at BIMCO, a trade group representing 2,100 ship owners and operators. “It is an increasing worry that we hear amongst our members.”

Capesize day rates slumped 3.9 percent to $16,559 a day on Wednesday, according to data from the Baltic Exchange. They stood at $27,283 on Aug. 6. Fourth-quarter forward freight agreements fell to $23,750, having been at $26,600 on Aug. 21, data from Clarkson Securities Ltd. show. The Baltic Dry Index, a wider measure of commodity transportation costs, slumped to 1,411 points, its lowest since late June.

Trump said on Friday that he’s lined up an additional $267 billion of Made-in-China products to tax “on short notice if I want.” That’s on top of already proposed levies of $200 billion that could lift the price of household goods in the U.S.

Shipping Rates Plunge as Owners Fret About Trade War Impact
Those paid to follow the dry-bulk market and its companies are staying overwhelmingly bullish for now. Of 10 dry-bulk ship operators tracked by Bloomberg with market valuations exceeding $500 million, equity analysts have a total of 87 buy ratings, 8 holds, and six sells.

“There’s good reasons to believe this bullish sentiment will turn out as expected, even though in the short-term there’s been some negative pulls,” said Herman Hildan, co-head of research at Clarksons Platou Securities AS. While there’s “no doubt that the market is worried about the possible consequences of the trade war,” vessel supply remains “low.”
Source: Bloomberg