Global oil markets were rocked by a second shockwave in as many months during October – this time sanctions against Chinese tanker firms and in particular COSCO Shipping Tanker (Dalian) – causing havoc in the markets.

While the Chinese tanker embargo didn’t have the immediate shock effect as September’s drone attack on key Saudi oil installations, the US move had huge consequences for freight and a significant knock-on effect for oil markets and price differentials between benchmark grades.

The sanctions on COSCO effectively removed around 50 oil tankers from the global fleet and, more importantly for Middle East crude oil markets, COSCO controls around 5% of the global Very Large Crude Carrier (VLCC) fleet. Freight costs around the globe soared to record highs, adding millions of dollars in costs for charterers.

Long-haul routes bore the brunt of huge hike in freight costs, in some cases leading to refiners cut back on grades, particularly US crudes coming into Asia. Freight rates peaked mid-October, with Reuters reported that shipping U.S. crude to some of the largest Asian customers became unprofitable after costs rose as high as $11/barrel during the first half of October, threatening to severely reduce November shipments.

VLCC for US Gulf-China briefly peaked at more than $20 million for a VLCC USG-Asia – each million dollars adding around $0.50/b to the price of delivered crude. According to vessel trackers Kpler, in early October U.S. oil exports to Asia dropped to 508,000 barrels per day (bpd) in the seven-day period ended Oct. 7, from 1.1 million bpd in the previous week.

Short-haul shipments fared better, benefitting from the saving on shipping costs. For instance Russian ESPO crude hit a record premium of $9/b over Brent as the grade profited from its proximity to the main customer base in China, South Korea and Japan.

Middle East grades sold into Asia also fared better than the longer-haul voyages, but charterers were still forced to pay VLCC of over $300,000 per day at the peak. Early September daily chartering rates were around $30,000.

Benchmark Middle East Oman crude futures started the month on a firm note, trading at near parity to the North Sea Brent but then quickly moved above Brent. While most North Sea crude oil is refined in Europe, the marginal barrel is typically priced at the netback value from Asia, meaning North Sea lost out in terms of freight costs against Middle East grades.

At the peak Oman was trading a premium of around $1.50/b over Brent, while the October monthly Brent/Oman average was an all-time record of around -$0.70/b. The Brent/Oman inversion has confounded many earlier forecasts anticipating Brent to open up a healthy premium over Oman ahead of IMO 2020, which limits Marine Fuels to 0.5% sulfur. Oman sulfur is around 1.4%, compared to Forties at 0.8% which typically sets the price of Brent.

Oman lies outside of the Arabian Gulf so charterers enjoyed a freight saving vs AG grades, leading to Oman trading at its highest premium over Dubai this year. Oman/Dubai averaged around $0.80/b over the month, the highest since October 2018. The Dubai price is typically set by Abu Dhabi’s Upper Zakum or Qatar’s Al Shaheen. 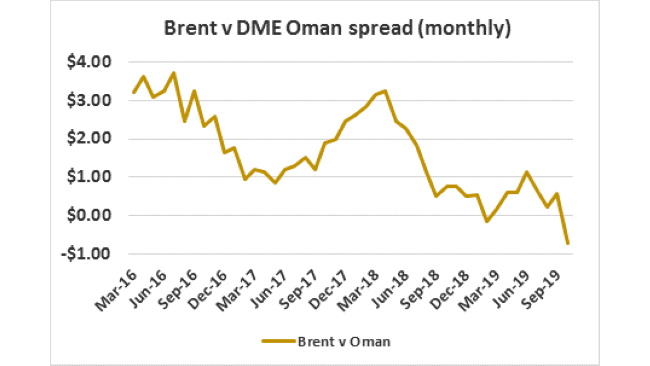 The US Treasury department later issued a waiver on Chinese tankers until December 20, which has led to a steep drop in freight costs. This will give the industry more time to prepare for the sanctions, but the outlook remains uncertain and further volatility is likely.

Meanwhile Oman futures traded in a relatively narrow range of $58.00-$61.30/b during October, breaking to the upside in early November with the new front-month January contract closing $61.87/b on November 4. At the same time Brent/Oman was -$0.33/b, as Oman continues to trade a premium to Brent.
Source: DME – Dubai Mercantile Exchange Limited