While it’s safe to say that 2018 has been a landmark for the ships’ demolition market, particularly in the beleguered tanker segment, the past few weeks have been less than ideal, in terms of further alleviating tonnage supply. In its latest weekly report, shipbroker Clarkson Platou Hellas admitted that “a somewhat muted position has been evident this week amongst the industry players with the market seemingly hanging in a precarious position, making it difficult to predict which side of the line the sentiment will turn. Generally, it would appear all markets are adopting a ‘wait and see’ attitude with Buyers possibly trying to extract some knowledge from the economic climate globally before they take a further speculative stance. Some parties are expecting a rebound in the domestic steel rates but any potential increase in price levels for ships are meeting some resistance for the time being until confidence returns”, said the shipboker. 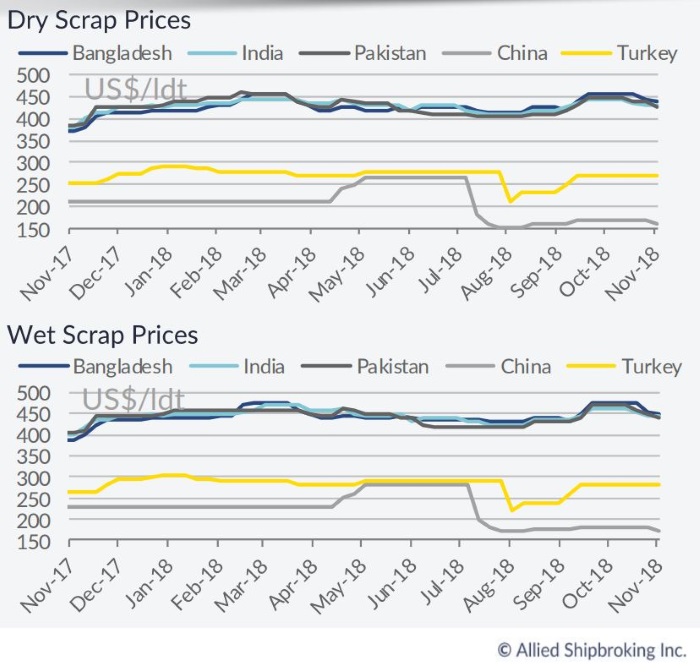 Clarkson Platou Hellas added that “the annual spike usually seen in the 4th quarter of the year has so far not materialized, giving credence to the uncertainty currently felt by many players in the industry but the lack of available units now noticeable may help to steer some positivity back into the actual recycler’s minds. With the freight market in the dry sector starting to come under pressure after a stirring year, maybe some dry bulk units may be forthcoming for Buyers to sink their teeth into again, but obviously this remains dependent on how long the current weak rates continue. Whilst the Bangladeshi market has been the most stable of recent weeks, it is now understood that there are problems with local banks opening Letters of Credits and subsequently, placing cash buyers with tonnage in hand into a difficult position. This could be the one potential issue that could currently affect a positive turnaround and hope that this is just a ‘small period’ blip”. 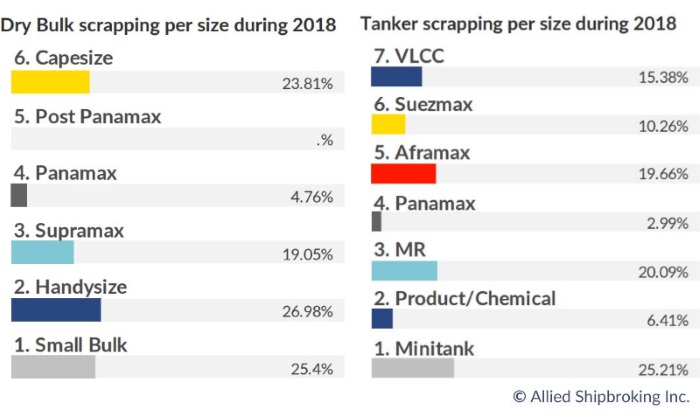 In a separate note this week, Allied Shipbroking said that “at the recycling market seems to be on unstable ground at this point. After a couple of weeks with healthy flow of units sent to be beached, the market shows once again signs of a total clampdown, leaving little to be desired right now. Moreover, given the ups and downs of late, there seems to be a lack of clear trend in the market. The most concerning thing however, is not that there is a lack of stability in terms of volume, but the rumors of excessive level of inventory noted amongst cash buyers in the market. As the price gap between cash buyers and end breakers widens further, there should be an extra negative push, adding further unwanted pressure to the overall market. With local currencies also on the waning side, there seems to be a long way to go before any stability is restored. For the time being, given that we are at the half point mark of the final quarter of the year, with most hoping for some favorable gains, at least in the short run, it is rather unlikely to witness any excess tonnage being pushed in this direction for now”. 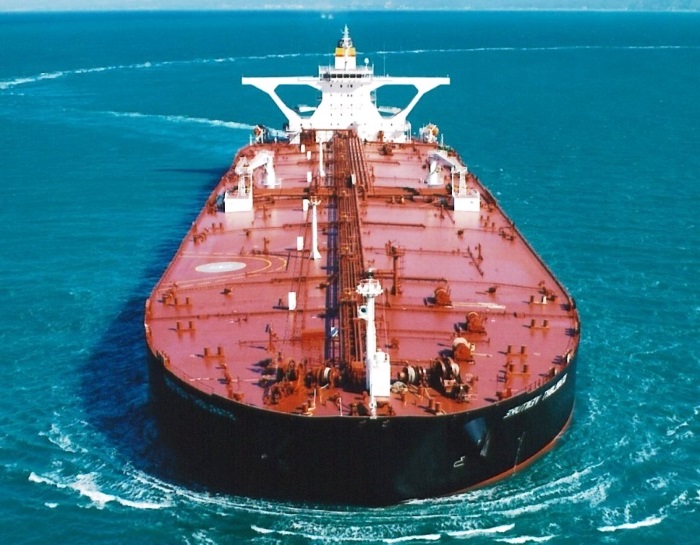 Meanwhile, GMS, the world’s leading cash buyer said that “markets fully progressed into “bear” territory this week, with sentiments weakening and end Buyer offerings subsiding by the day. Expectedly (and as previously reported), Cash Buyers are now struggling to offload their expensive inventory at anywhere near breakeven levels and it seems as though end Buyers are starting to smell “blood in the water”. There are purportedly about 35 Cash Buyer controlled unsold vessels being offered into the various markets. With Pakistan abstaining from the buying after the recent turmoil there and India once again turning inert, much of the Cash Buyer focus has shifted squarely onto a previously bullish Bangladesh. However, given the spate of beachings over the last few tides, a healthy majority of capable Chittagong recyclers have already been booked with some of the previously concluded pricier tonnage. As such, the struggle now is for Cash Buyers to try and commit their remaining units with the few open Recyclers who are struggling to get the necessary bank limits to open fresh L/Cs, failing which, we may well see Cash Buyers start to hold onto their vessels once again (at least for a short while) until some sort of stability is seen on levels as, given the developing situation, very few offers are even emerging whilst end users across the board are fearing further falls ahead. Overall, currency depreciations against the U.S. Dollar have been an increasing cause of concern for many months now, particularly in India and Pakistan, where heavy losses have been sustained. However, this has now spread to Bangladesh as rumors of an imminent fall in the Taka before the year-end have started to make the rounds”, GMS concluded.