China is planning on financing more coal-fired power capacity beyond its borders than Germany currently operates, according to a new report from the Institute for Energy Economics and Financial Analysis (IEEFA).

In an interview at last year’s UN climate conference, Li Junfeng, director of China’s National Centre for Climate Change Strategy, said, “We can’t require a developing country that is less developed than China to start decreasing coal consumption now, that is not possible.” China is helping other countries meet their coal power needs with the cleanest ultra-low emissions technology, he said.

The IEEFA report shows that the Chinese-financed coal plants have become more efficient, with fewer of the most carbon-intensive plants under development. These concurrent trends of continued coal power development, but with more efficient technology, mirror China’s own energy trajectory. Although the move toward greater efficiency carries some environmental and health benefits, it still defies the call for global decarbonisation.

China is not a new entrant to global coal power development. A study conducted by the Global Environmental Institute in 2017 found that between 2001 and 2016, Chinese companies and banks were involved in 240 coal projects overseas with a total capacity of 251 gigawatts. Analysing public finance alone, the Natural Resources Defense Council showed that China has been the largest backer of overseas coal power in recent years.

IEEFA’s new report pulls back the curtain on China’s future plans. Its involvement in coal projects does not appear to be flagging: Chinese financial institutions and companies have committed or proposed to finance one quarter of the coal plants under development outside of China – 102 gigawatts of capacity spread across 23 countries. 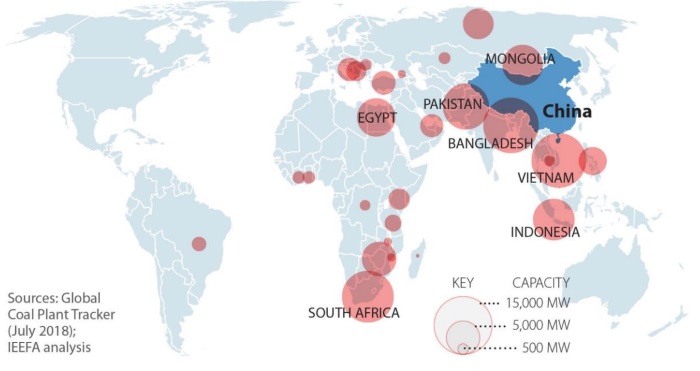 Demand from developing countries is also driving business, said Yuan Jiahai, a professor at the North China Electricity and Power University. His field research on China’s coal power development in Southeast Asia showed that coal remains attractive in the region. “For countries like Indonesia and Vietnam that are in the early stages of industrialisation, coal power is still the most economical and reliable choice,” Yuan said, adding that these countries prioritise safety and cost over environmental considerations.

China is not alone in capitalising on this demand for coal plants; Japan and South Korea have long been active financiers and developers in these countries as well, rivalling China. As the chart below shows, the countries receiving the most financing from China are also receiving finance from other countries.

Share of coal power capacity under development with Chinese finance 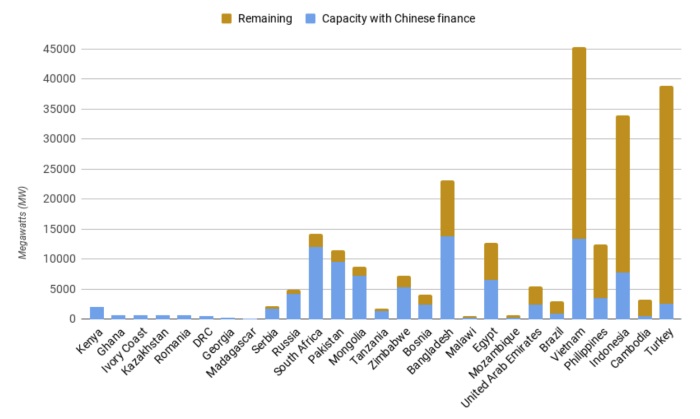 Chinese officials and media have trumpeted advanced coal technology as a key export to developing countries. As Li Junfeng expressed, China has pioneered high-efficiency coal power that can supply demand from developing countries in a relatively green way.

Indeed, China’s investments in coal power abroad have steadily shifted toward more efficient technology. In a 2016 study, Kelly Sims Gallagher, a professor at Tufts University, found that from 2013 to 2016 only 26% of the Chinese-financed coal plants abroad were inefficient subcritical plants, compared to 58% for the whole of 2000-2016. IEEFA’s report shows that this trend is projected to continue: 23% of the plants in China’s overseas financing pipeline are subcritical.

The trend follows China’s own domestic energy transition, although it lags a few years behind. China’s coal plant pipeline has shrunk over the years as the country has acknowledged the excess capacity in the sector, but it still has over 200 gigawatts of capacity in development – twice what it intends to finance abroad.

Even as the country continues to build coal plants, its fleet has become much more efficient. The majority of China’s plants are still subcritical, leftover from earlier construction, but in recent years the country has shifted toward building high-efficiency ultra-supercritical plants.The 13thFive-Year Plan for the electricity sector sets high efficiency targets for plants to meet, blocking future subcritical plant construction. If an old plant cannot meet this efficiency standard by 2020, it will be shut down. Conventional air pollution standards for Chinese plants are also mostly higher than in the US and EU. 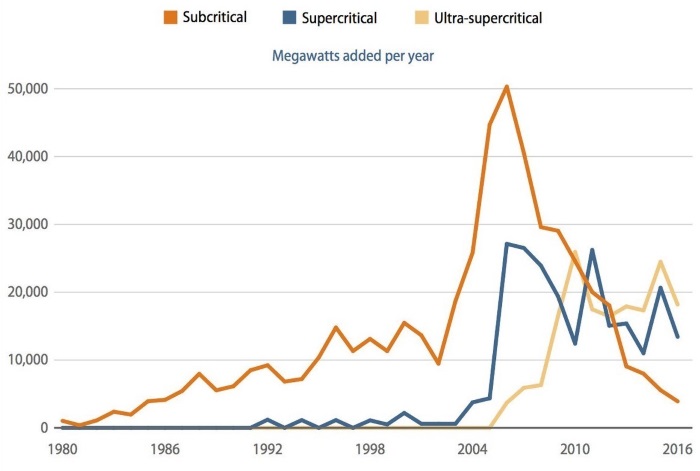 Abroad, the shift to cleaner technology has occurred more organically. China does not block its banks or companies from investing in low-efficiency coal projects. But high-level commitments to a “green Belt and Road” and the competitiveness of China’s efficient technology may be pushing Chinese banks and companies forward, Yuan Jiahai said. Chinese companies are increasingly taking long-term positions in coal projects overseas, co-owning or operating plants where they were formerly just involved in construction or equipment provision. In doing so, they have taken on more long-term risks – risks of stranded assets if alternative energy supplies become cheaper and of government policies requiring retrofits, as China itself has done. Getting ahead of the curve and investing in better technology may be a logical choice.

Meanwhile, developing countries may still see coal as the most stable and attractive option for their power sector development, but they are also feeling pressure to move to cleaner alternatives. Countries had to submit climate action plans under the Paris Agreement, with many committing to renewable energy goals. Protests have also stalled the development of dirty coal plants in a few notable cases, including a protest against two proposed plants in Bangladesh, co-sponsored by a Chinese company. At least four people were killed protesting the plants and their displacement of local people.

The limits to ‘clean’ coal

Though this new wave of high-efficiency plants can help reduce pollution and coal consumption compared to older technology, it is no climate solution. The 23% of China’s development pipeline that is subcritical is still 23 gigawatts of inefficient coal power, and even the most efficient coal plants are still very carbon-intensive. 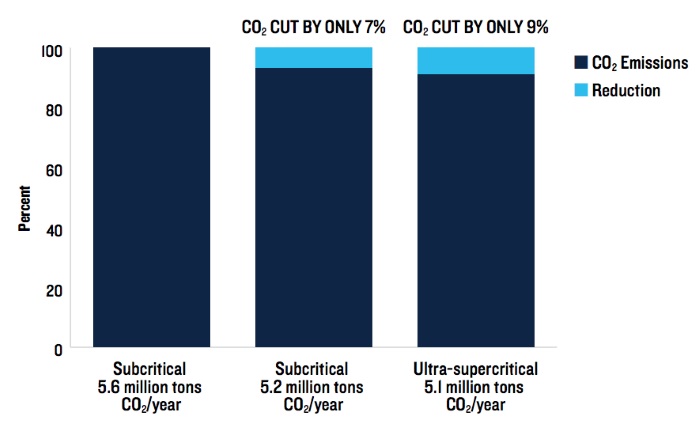 “While improving efficiency in coal-fired power plants is better than doing nothing, building new coal plants without carbon capture and storage is incompatible with the energy transition required by the Paris Agreement, especially because each new coal plant built today will last 30-50 years,” said Gallagher. A report published by Coalswarm and other NGOs last year showed that the existing fleet of operating coal plants worldwide will already exceed the carbon budget for coal plants through 2050, so many plants will have to retire early.

Internationally, OECD credit export agencies have agreed to phase out coal financing, and most major multilateral lenders have also restricted coal financing. Last year, the World Bank backed out of the only coal plant it had in its investment pipeline, saying that renewables were now a cheaper option. Major Japanese power companies and insurers have announced they will no longer invest in or undertake coal business.

Many of the countries building Chinese-financed coal plants qualify as least developed countries. Under the doctrine of common but differentiated responsibilities, such countries should be granted more flexibility in their path to reducing emissions. A 2016 study by Climate Analytics acknowledges different coal phase out pathways for different regions, but argues that no new coal plants can be built globally in order to meet the Paris Agreement 1.5 degree goal.

In a joint US-China statement at the White House in September 2015, China agreed to strictly control public investment for overseas projects with high pollution and carbon emissions. The Green Credit Guidelines, which regulate China’s banks, also call for them to follow international best practices, but these guidelines are neither legally binding nor explicit on coal finance.