Should the industry worry about decreasing VLSFO viscosity?

VLSFO quality remains a headline IMO2020 topic. As suppliers are getting more experienced at producing VLSFO blends, the proportion of off-spec tests has been declining, although certain quality concerns remain. One of these is the reduction in viscosity, which is due to more distillate blending. This has resulted in vessels being required to adjust age old practices in order to handle and consume the fuel and moreover requires a change in tact when procuring bunkers. The choice of fuel is often limited, however checking quality before buying is as important as ever in order to minimise the risk of claims.

Lower off-specs but watch viscosity and associated issues
Up until recently, the main concern with regard to VLSFO quality was the relatively high number of off-specs, compared with the other grades like HSFO and LSMGO, and particularly on the “sensitive” parameters. However, as seen in Figure 1, this is now changing and the share of VLSFO off-specs has been declining. On the other hand, it was found that it is not always necessary for a fuel to be off-spec to result in quality issues when it comes to storing and consuming it. As the market adjusts to the IMO2020 switch and pricing made it favourable, more distillates have recently made their way into the VLSFO blending pool. 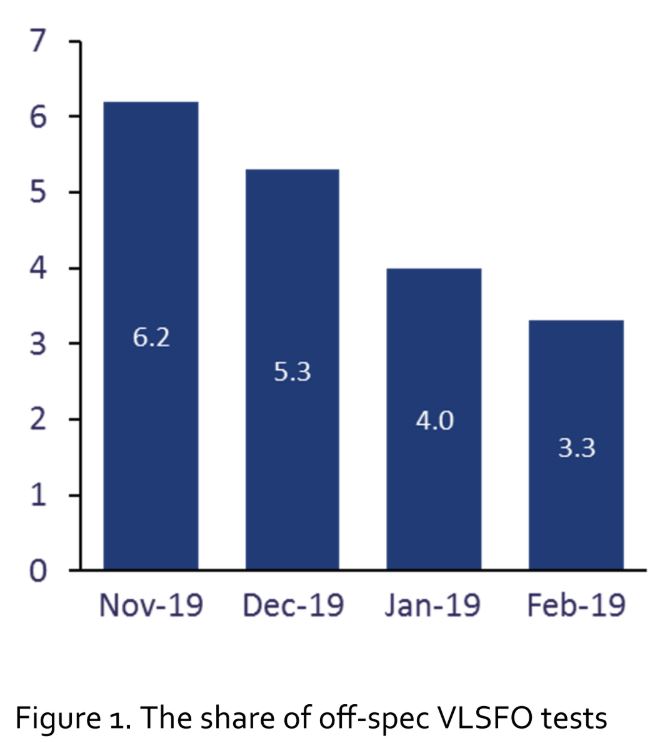 Figure 2 below shows the increase in the share of distillate based VLSFO blends and the associated reduction in viscosity. Indeed, viscosity dropped globally from around 160cst in early November to around 100cst by March, a drop of over 35%. At the same time the share of distillate based VLSFO went up from around 20-25% to 35-40%. The viscosity drop has affected most bunker hubs. For example, viscosity in ARA dropped 30cst by March to 100cst and there was a bigger decrease in Singapore, from 170cst down to 90cst, with an even bigger reduction in Malta, from 150cst to 50cst. The trend of lowering viscosity in combination with other factors is a cause for concern. Viscosity, density, pour point, aluminium and silicon (ALSI), and sediment potential (TSP) require careful assessment when purchasing and consuming the fuel. 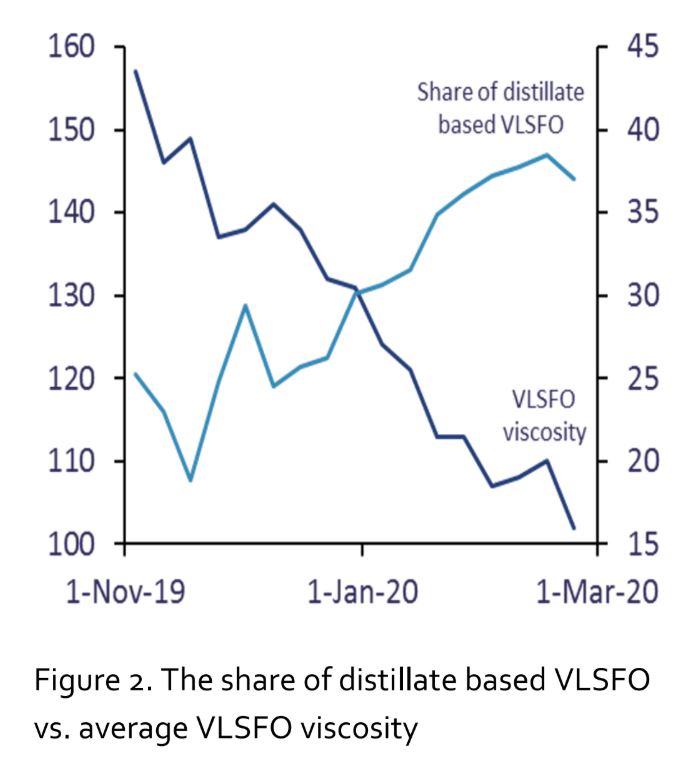 Viscosity and Pour Point
In the past the effective purification of HSFO required a temperature of 98 deg. C for any fuel over 180cst. Given that many VLSFO fuels are now well below this viscosity level, the purifier temperature is adjusted lower to achieve 20-24cst viscosity in the purifier (for example 58 deg. C for a 30cst fuel). However, the new VLSFOs are more paraffinic (waxy) and with a higher pour point than HSFO. Under reduced purifier temperatures such fuels may tend to produce wax sludge, which could cause serious handling difficulties; it could also potentially affect the efficiency of removing particles such as aluminium and silicon to safe levels. It is also essential to inject VLSFO into the engine at the correct injection viscosity. For very low viscosity VLSFO the temperature to achieve the correct injection viscosity may well be on, around, or in extreme cases below pour point (at which the fuel no longer flows) and the wax appearance temperature. For example, in order to inject a 5cst and +12 pour point VLSFO, it has to be heated or cooled to 18 deg. C, which is only 6 deg. C above pour point (recommended min. 10 deg. C above pour point). In trying to rectify this by increasing the injection temperature the corresponding fuel viscosity would fall, in effect leaving an impossibly small window to operate in outside of which poor combustion, deposit formation and loss of energy may occur even though the fuel is fully compliant with the contractual specification.

Therefore, some owners may prefer buying VLSFO with minimum 30cst viscosity for RMD/E/G/K grades where pour point is limited to 30 deg. C maximum. Alternatively, if the fuel available is less than 30cst viscosity, it is recommended to be sold against the RMA 10 or RMB 30 spec for which there is a much tighter 6 deg. C (0 deg. C for the winter spec) limit on pour point.

Density and Viscosity
High density in combination with low viscosity remains a cause for concern for VLSFOs, similar to HSFO due to the possibility of poor or delayed ignition and combustion which can result in engine damage. This is also reflected in high CCAI readings in such fuels. It is important to remember that the 2005 ISO specification does not offer CCAI protection. TSP (Total Sediment Potential) Analysing over 15,000 VLSFO test results it was found that TSP (the ability of the fuel to deposit sediment) appears to trend up with a decrease in viscosity (Figure 3). This may be due to distillate blending and where different VLSFO components (paraffinic, naphthenic, aromatic) are mixed together in a blend. Moreover, given that the hot filtration test is performed at 100 deg. C the effects of lower purification temperature (due to fuel’s low viscosity) on the purifier with regard to wax formation may not be fully identified.

Overall, VLSFO quality seems to be improving with fewer samples tested offspec, however checking quality before buying is as important as ever. The ISO spec sets the upper limit for most parameters and it was found that even with all parameters on-spec, some VLSFOs may be more problematic than others. This is not normally the case with HSFO where most parameters vary in a much narrower range and average viscosity, despite dropping slightly recently, is still around 300cst. When it comes to bunker procurement, Integr8 Fuels provides its customers with full information not only on the price but also on quality, availability and delays. By analysing global trends and changes in quality, Integr8 Fuels are well positioned to help procure quality fuels and minimise the risk of claims.
Source: Integr8 Fuels