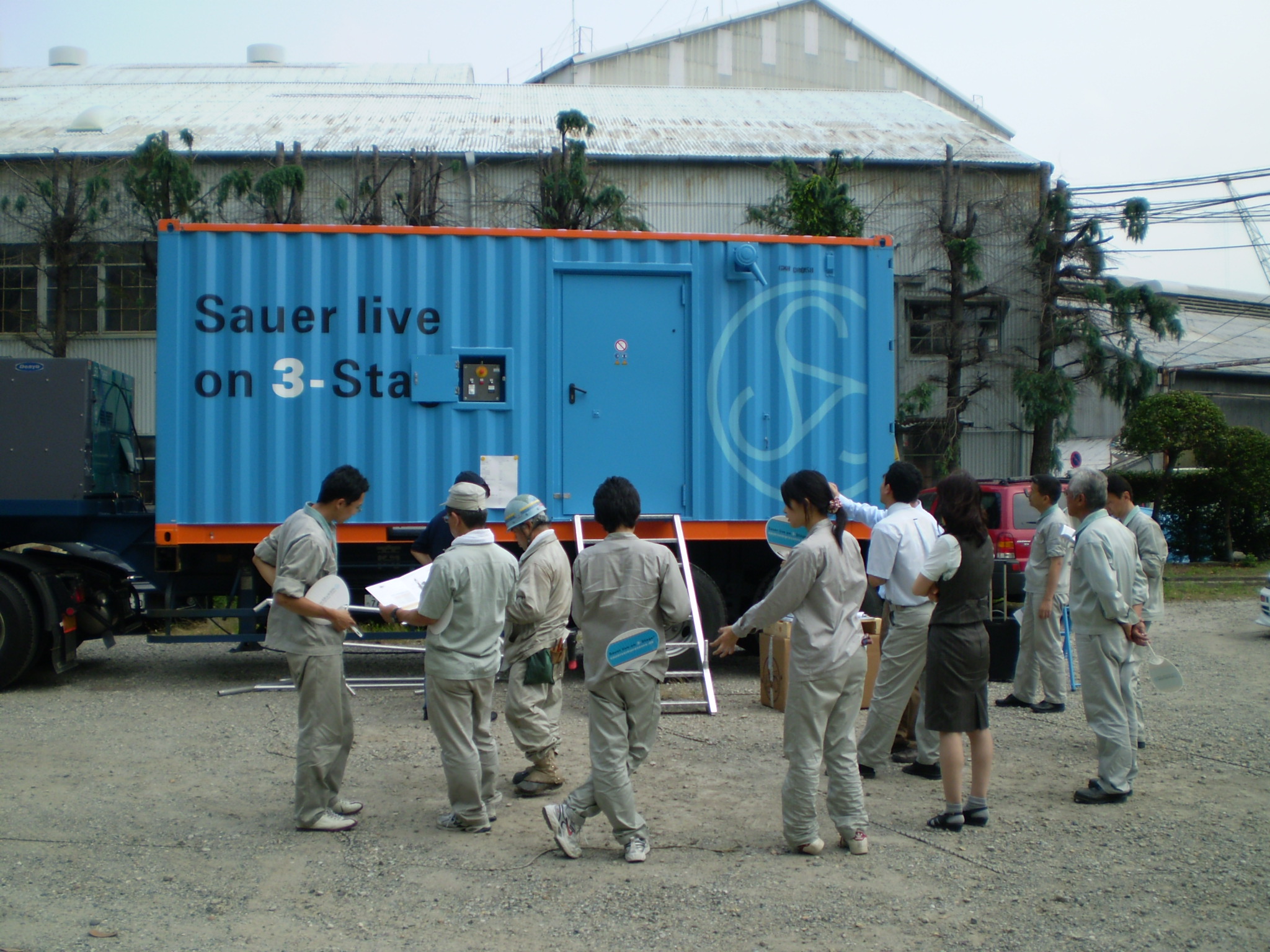 Large ships, large engines, large fill-up capacity
To start the ship’s engine, compressors fill 30 bar compressed air into air receivers whose volume is determined by the engine size. As required by the classification societies, the amount of compressed air must be sufficient for a certain amount of engine starts. The increase of the international trading volume starting in the 1950s led to bigger ships and engines and therefore a higher demand for compressed air. 2-stage watercooled compressors were the most common solution for starting the ever larger diesel engines. Due to their comparably low fill-up capacity, the 2-stage air-cooled compressors that were commonly used for smaller ships were not a viable alternative.

But Sauer Compressors was eager to enable the use of aircooled compressors for large ships and engines as well. In the early 1970s, the company came up with the idea of adapting 3-stage air-cooled compressors as an established solution from the industrial sector to commercial shipping. However, despite their successful application on the Railship I and several other ships, the 3-stage air-cooled compressors could not establish themselves as industry standard. “The building of large cargo ships was relocated to Asia and the local shipyards simply took over the established design standards”, explains Stephan Behrens. Only with the new millennium, the multi-stage aircooled compressors were finally put on the standard makers list of the Asian shipyards. Sauer Compressors was able to convince ship owners and builders not only with references but also with specific demonstrations. For this purpose, a 3-stage air-cooled compressor was installed in a TEU container and presented worldwide. “The decision-makers were able to experience the benefits of the technology themselves, for example how the compressor works reliably at high ambient temperatures, with low-vibration, and that no condensate is produced in the crank drive since the compressor always adjusts to the ambient temperature”, Stephan Behrens recounts this fieldwork. 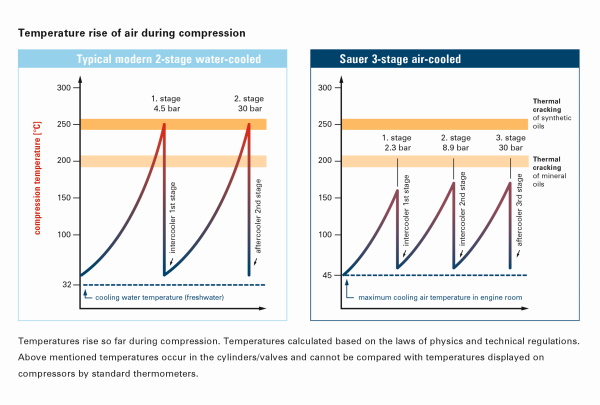 Reduced temperature thanks to three compression stages
The 3-stage air-cooled compressors are bigger and therefore have a significantly higher fill-up capacity than the 2-stage aircooled machines. The total heat to be dissipated is divided between three stages instead of two and the heat-dissipating surface area increases while the heat-generating volume remains the same. Air beats water 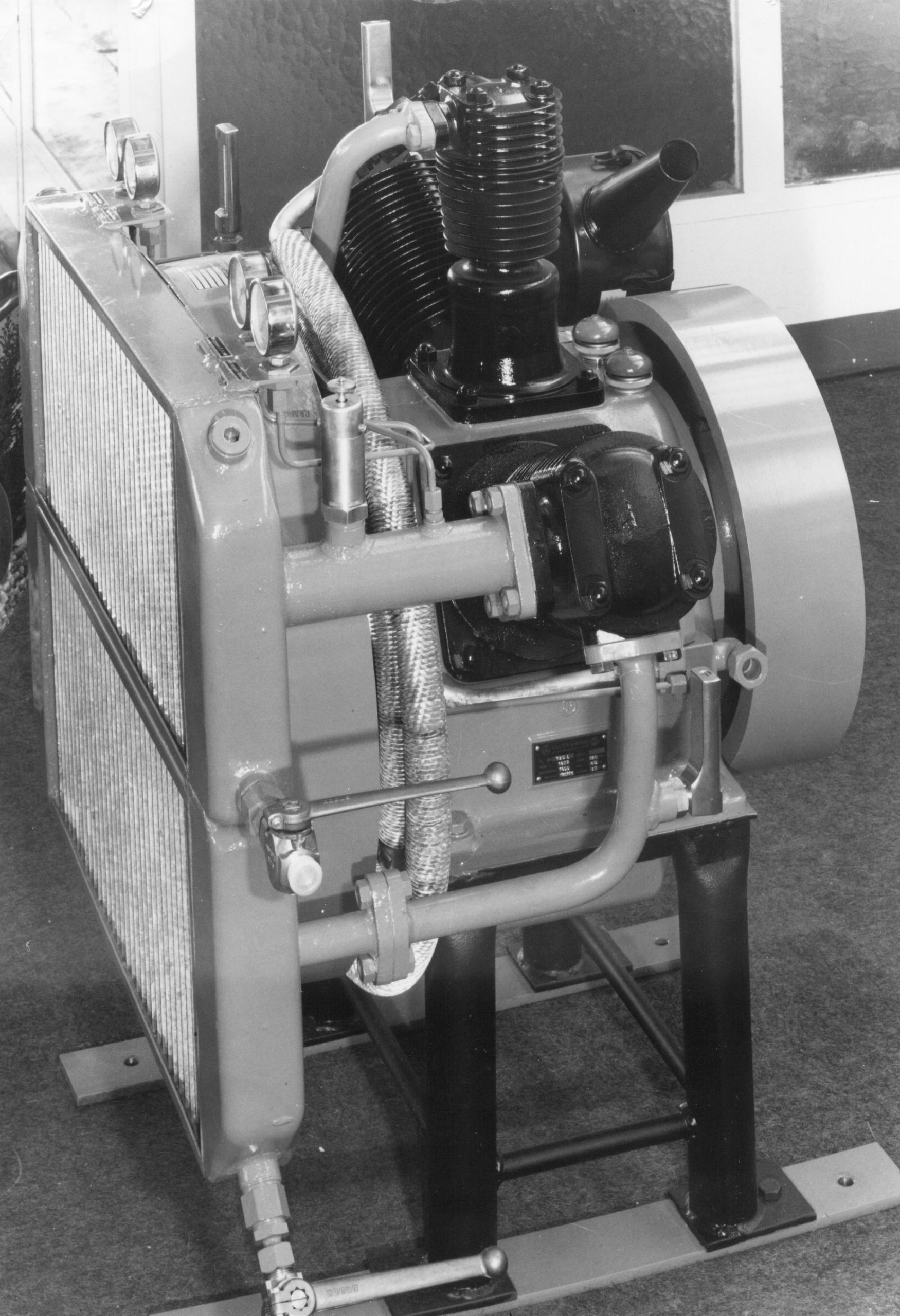 Quick amortisation of air-cooled compressors
Cooling the starting-air compressor with room air makes a cooling water circuit obsolete. “This can save installation costs of up to $ 7,500”, states Stephan Behrens. Moreover, it avoids leakages and troublesome condensate in the crank drive that occurs when travelling through different climate zones. Other benefits are reduced space requirements in the engine room, higher reliability, and minimum operating effort of the selfregulating air cooling. There is no need to modify the fan output of the engine room ventilation, since the waste heat of the compressor is negligible compared to the heat of the ship’s engine. As the new generation of 3-stage air-cooled compressors is extremely powerful, the number of compressors required to reach the fill-up capacity that is needed for large ships is now lower than it was a few years ago. “A 24,000 TEU ship usually only needs three to four starting-air compressors, out of which one only serves as a reserve”, explains Stephan Behrens.

SAUER Levante – new compressor with capacities of up to 460 m³/h
Sauer Compressors is the technology leader in the field of 3- stage air-cooled compressors and covers the whole range of market requirements with two series. The models of the new SAUER Levante series are particularly powerful. “By introducing our Levante series, we have responded to the ongoing trend towards larger ships and are the only manufacturer worldwide to have recently presented a completely new development”, says Stephan Behrens. The compressor, exclusively developed for commercial shipping, is available in three different types with capacities between 275 and 460 m³/h at a final pressure of up to 30 bar.g. Thanks to their compact and space-saving design, the compressors fit into any engine room. A unique selling point of the design is the use of block coolers in all three stages. By installing the newly developed SAUER CubeCooler between engine and compressor, the air flow is optimised and moving components are shielded. Before their market launch, the Levante compressors have been tested for more than 20,000 operating hours on Sauer Compressors’ test stands as well as on ships operated by partner shipping companies. 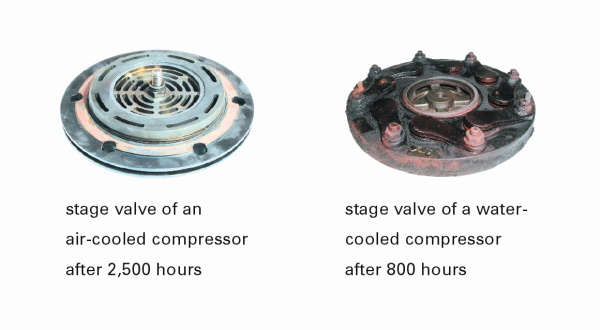 Box:
Sauer Compressors is a medium-sized German group of companies with 14 international subsidiaries. The company looks back on more than 135 years of history and over 85 years of experience in compressed air and gas technology. These days, the focus is on the development, manufacture and sale of oillubricated and oil-free medium- and high-pressure compressors for applications in commercial shipping, industry, petro industry and the defence sector. The four product lines SAUER, HAUG, GIRODIN and EK focus on specific fields of application. The SAUER line comprises oil-lubricated high-pressure compressors for a wide variety of applications, while HAUG stands for oil-free and hermetically gas-tight compressors. The GIRODIN and EK lines offer special compressors for the naval market. The modern reciprocating compressors for compressing air as well as a variety of gases reach pressures of 20 to 500 bar.g. In addition to standard products, customised solutions are offered for every type of application for individual customers, OEMs and globally active companies. With a worldwide network of representatives and partners, Sauer is always close to its customers. By supplementing the compressor range with highquality accessories, engineering services, assembly and service concepts, Sauer provides complete system solutions right up to complete turnkey installations.
Source: Sauer Compressos