The Baltic Exchange Dry Index (BDI) increased from 1,374 to 5,650 between early January and early October 2021, only to fall back to 1,302 by late January 2022. Since then, the market has enjoyed increased support as Brazilian exports recovered from heavy rains, and Indonesia’s coal export ban was lifted. By end May 2022, the BDI was back at 2,933, up 337 points on the same time last year.

A drop-off in grain shipments following the closure of Ukrainian ports and a low level of shipments into China has been a drain on demand, whereas a renewed interest in coal in the European Union has provided new support.

Congestion has remained an issue and so far this year, more ships have consistently been stuck for longer than in 2021. This naturally adds inefficiency to the supply chain and reduces effective supply, thereby tightening the supply/demand balance in favour of owners and operators.

Developments in China, which accounts for around 35% of global cargo demand, have been a concern following the strict implementation of a zero-COVID policy leading to extended lockdowns. This has naturally caused a reduction in both activity and demand for coal and iron ore. 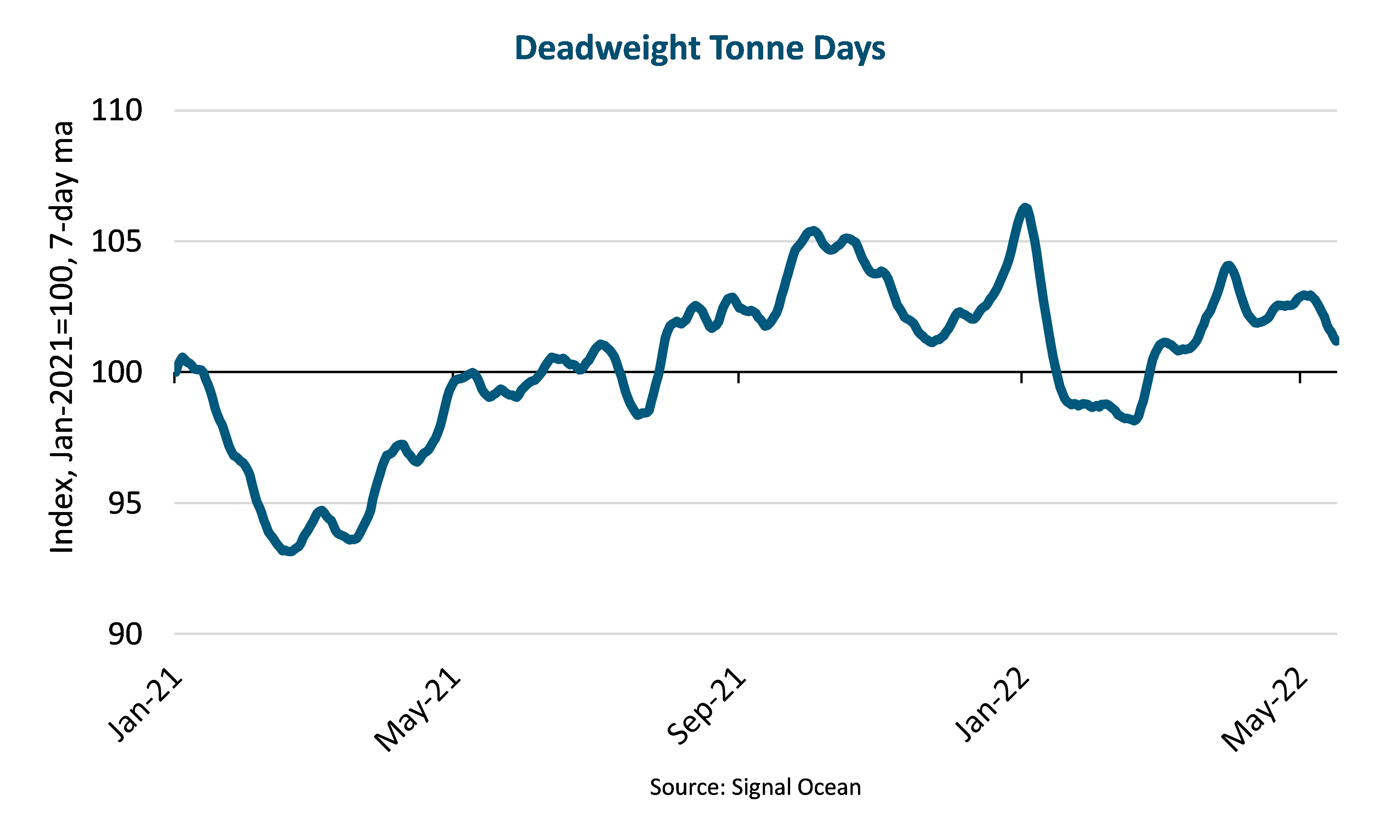 Time charter rates and second-hand prices have followed freight rates upwards, as has the number of second-hand transactions.

Meantime, newbuilding contracting has come to a virtual halt during the first few months of 2022, and the size of the orderbook has hit a new low of only 6.6% of the trading fleet. Newbuilding prices have, however, still been pushed upwards by heavy contracting of container and LNG ships, although the rate of increase is now slowing down.

In April, the International Monetary Fund (IMF) lowered their forecast for global GDP growth to 3.6% for 2022 and 3.6% for 2023. These figures are down 0.8 pp and 0.2 pp respectively on those forecast in January, prior to Russia’s invasion of Ukraine. The forecast for all main importers of bulk commodities has also been reduced.

Congress of the Chinese Communist Party.thThe forecast for GDP growth in China has been lowered to 4.4% and 5.1% for 2022 and 2023 respectively. The forecast for 2022 is somewhat lower than China’s official target of 5.5%, but some analysts predict that growth will be even lower; Bloomberg Economics predicts it could be as low as 2.0%. In our opinion, no matter where growth will end up, 2022 will be a tale of two halves. The first half has been hurt by lockdowns, whereas we believe that President Xi Jinping will look to ensure recovery in the second half leading into his re-election in the autumn at the 20 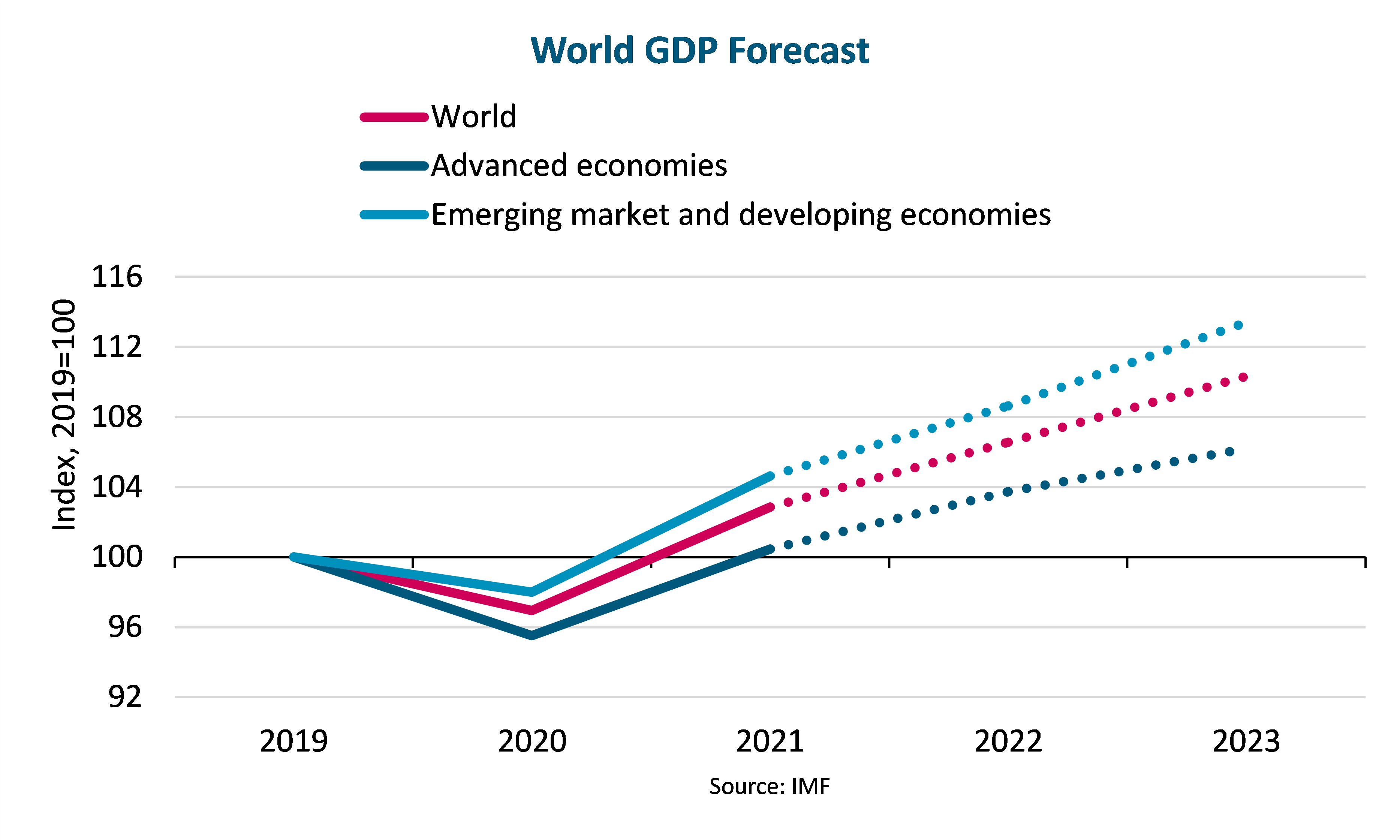 The IMF’s global forecast mentions large downside risks related to further adverse developments in commodity prices, supply chain disruptions, inflation, and financial conditions. In their worst-case scenario, the IMF predicts that GDP in 2023 could end up 2.0% lower than the baseline forecast. A recent report from the OECD highlights the risk. In Q1 2022, the combined GDP of the G7 countries is estimated to have shrunk by 0.1% q/q, whereas IMF’s baseline forecast assumes that the combined GDP of the G7 economies will grow by 3.2% in 2022.

Beyond the overall risk to the global economy, final demand in the bulk sector is likely to be impacted by a complex mix of up- and downsides: increasing commodity prices, inflation, and interest rates putting a strain on businesses and consumers, while a shift in trading patterns could increase average sailing distances.

The World Steel Organisation is forecasting that global steel demand will increase by 0.4% and 2.2% in 2022 and 2023 respectively. Global iron ore demand should naturally follow a similar trend.

Unusually, steel demand in China during the next two years is expected to grow at less than a quarter of the rate for the rest of the world. The real estate market has slowed significantly, while car manufacturers are suffering from chip and battery supply chain issues. To stimulate growth in the economy, China has instructed local governments to issue most of this year’s CNY 3.65 trillion special purpose bonds allocation before the end of June, and the rest by the end of September. So far this year, 60% of issued special bonds have gone towards infrastructure projects that stimulate steel demand.

In late 2021, the International Energy Agency (IEA) estimated that global coal consumption in 2024 would be only 1.2% higher than in 2021. Since then, coal prices have shot up, which may make maintaining consumption levels a challenge in some low-income countries. Additionally, both China and India have increased their domestic coal mining targets. Already in 2022, China aims to mine more than the estimated consumption in 2024, and from January to April 2022 mining was up 11% y/y. India is aiming for domestic mining to match consumption by 2024 and year-to-date mining has been up 9% y/y. In the short term, both countries are expected to continue to import coal to rebuild low stocks, but in the longer term, they are aiming towards greater self-sufficiency, which will affect global coal shipments. Elsewhere, coal has suddenly regained popularity in the European Union as the bloc looks to wean itself off Russian energy. This will increase cargo demand, with tonne miles growing at a quicker rate.

Russia’s invasion of Ukraine caused immediate upheaval as Ukrainian ports closed and halted about 15% of global wheat exports and 11% of global maize exports. An immediate spike in prices followed and fears of a global food crisis remain. India temporarily stepped into the wheat market with its first wheat exports for some time but soon implemented a partial export ban to protect local supply as a heatwave caused crop losses.

Despite a smaller global wheat harvest, the US Department of Agriculture (USDA) is still expecting wheat exports for the 2022/23 marketing year to be up 1.8% on 2021/22. A strong harvest is expected in both Canada and Russia, and countries are expected to tap into stocks in order to cover export demand. For now, it appears impossible to replace Ukrainian maize, and exports are estimated to drop 3.8% in 2022/23 compared to 2021/22. The last of the top three agricultural exports, soyabeans, is expected to increase due to strong harvests in Brazil and the US, and the continued recovery of the Chinese pig herd numbers. 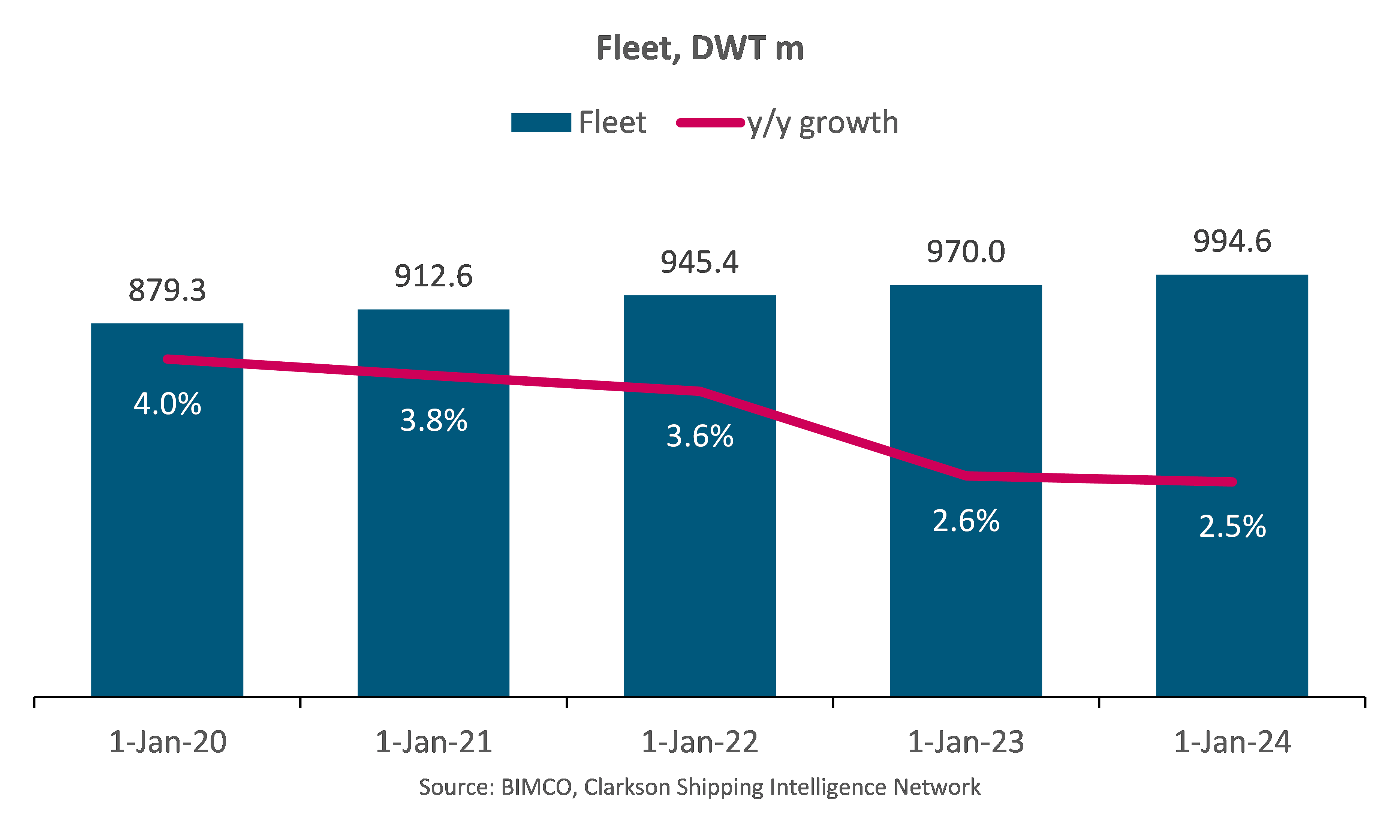 In total, an additional 10.8 million tonnes of the three commodities are expected to be exported in the 2022/23 marketing year, equating to a 2.0% increase on the 2021/22 marketing year. Nevertheless, there is a risk that harvests may eventually be smaller as fertilizer prices have also soared, and Russian and Belarussian exports are constrained by sanctions. Farmers may be forced to use less fertilizer and end with smaller harvests. Also, the high grain prices may still dampen demand.

Despite the challenges and constraints, year-to-date deadweight tonne days demand appears to be up almost 5% on the same period last year. This has mainly been driven by increased congestion and it is difficult to forecast how this will develop in the coming period. Risks related to high food and energy prices, general trends in inflation, and interest rate increases by central banks remain and also add uncertainty to future growth prospects. For now, we remain cautiously optimistic about demand for the rest of 2022, whereas 2023 could deliver high growth if commodity prices and inflation move towards “normal” levels.

Measured in deadweight, contracting from January to April 2022 has been the lowest since 1999. The orderbook is now only 6.6% of the trading fleet and deliveries in the coming years will be low. We expect that contracting will remain low for the rest of 2022 and during 2023 as high newbuilding prices are discouraging owners. Meanwhile, the yards have very large orderbooks and, in any case, any ship contracted now would not be delivered before 2024 at the earliest.

Demolition slowed significantly in 2021 as high freight rates encouraged continued trading and we expect it to remain at about the same level over the next two years.

We must meantime highlight that this estimate does not assume increased demolition because of EEXI and CII introduction on 1 January 2023, nor does it consider the likely implementation of ETS in the EU.

We are quite certain that these regulatory measures will impact average sailing speed and thereby effective capacity supply. On some ships, Engine Power Limitation (EPL) will be used to comply with EEXI, while owners and operators may also wish to cut operational speed in order to improve CII ratings and limit ETS cost exposure.

Any increase in demolition due to EEXI would naturally lower supply even further, whereas a reduction in congestion would increase effective capacity supply.

Although many risks to the global economy and demand for bulk commodities remain, we are optimistic that demand growth in 2022 will match or not be far behind our estimated supply growth. A potential rest-of-year increase in average tonne miles for coal and grains and a resurgence in China could add to demand. For 2023, we currently estimate higher demand growth as commodity prices and inflation are expected to moderate.

In both years, a shift in congestion either up- or downwards could have a major impact on market conditions. Risks to cargo demand are also plenty which, if they materialise, could lead to an adverse development in both the supply/demand balance and rates and prices.
Source: BIMCO, By Niels Rasmussen, Chief Shipping Analyst