When Jason Pomeroy was a young boy, several formative experiences left a lasting impression on him and went on to play a role in his career choices.

“A distinct memory is walking with my father when I was eight years old around St Paul’s Cathedral in London and whispering into the curvature of the wall and hearing my father whisper back,” says Pomeroy, who grew up in the UK with a Malaysian mother and an English father. “The question of how this could happen set me on the path to thinking about architecture,” says the award-winning architect, master planner, academic, author, and TV personality.

The famous Whispering Gallery runs around the interior of the dome of St Paul’s Cathedral created by Sir Christopher Wren, the noted 18th-century English architect who was also an astronomer, anatomist, mathematician, and physicist. 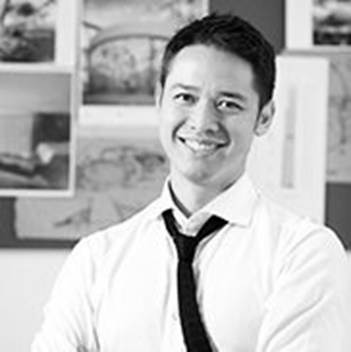 Eco-architect Jason Pomeroy has drawn up plans for climate-change resilient alternative housing and says future cities must be able to rise with changing sea levels.

Founder of the Pomeroy Studio and Academy, the Singapore-based eco-architect considers his most important goal – and the world’s for that matter – to be the blue agenda. That means looking to the world’s marine cities and waters as part of the solution to the current global sustainability crisis.

“Many cities grew as a result of trade via water. Indeed, 35 of the major cities around the world are located near a lake, river or ocean. As the population grew through individuals seeking prosperity, cities also grew and expanded further inland,” says Pomeroy. With rising sea levels and the depletion of natural resources, it is time to re-think the nature of cities in the context of population expansion and climate change-related challenges, he says.

“Twenty-five of 35 marine cities are in flood plains. We need to be resilient and ask serious questions about whether marine cities move further inland or embrace water as a surface area upon which to expand upon,” says Pomeroy, whose research degree at Cambridge University would eventually lead to a PhD and professorships at the University of Nottingham in the UK, the Universita IUAV di Venezia in Italy, and James Cook University in Australia.

Pomeroy has designed the world’s largest over-water villa development, the Lexis Hibiscus Port Dickson in Malaysia, which features 522 water villas stretching out into the sea. He has also undertaken pioneering research into zero-energy floating communities, and his Pomeroy Studio created Singapore’s first “carbon negative” home, the B House, which produces more energy than it uses. 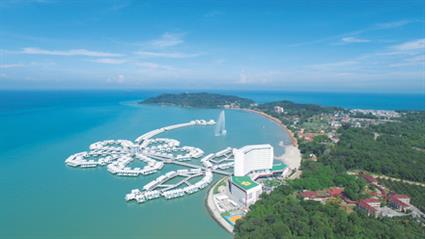 According to Pomeroy, better-utilised dock spaces and considering more dynamic floating structures could offer solutions to relieve the pressure on developing inner-city land parcels that are more costly.

“People love water,” he says. “Look at Singapore, a spot on the original Spice Route. In Keppel Harbour, ships were repaired before sailing off on the route. The Harbour fell into disuse before being converted into residential condominiums and luxury boat mooring. Amsterdam’s IJburg (a disused dock on the outskirts of the city) is another good example that provides people who can’t afford property in central Amsterdam with places to live. It addresses the city’s housing shortage as well as being resilient to rising sea levels.”

Pomeroy participated in Wärtsilä’s launch of SEA20; a global initiative focused on the radical transformation of the world’s marine and energy industries into one supremely efficient, digitally connected and environmentally conscious ecosystem. The forum, established in 2018, aims for cross-border dialogue and co-creation through an ongoing series of events and workshops that bring together the world’s most strategically important marine cities. Member cities are encouraged to rethink their roles in marine and energy ecosystems, to hasten the adoption and deployment of best practices, to embrace digitalisation and to legislate new environmentally friendly, sustainable and smarter ways of doing business.

“If we design our communities and cities to be dynamic in the sense of being able to rise with changing sea levels, we have the chance to reinvigorate those water bodies that may have fallen into decline,” says Pomeroy. “The Earth is 30 percent land and 70 percent water. By 2050, 70% of the world’s population will be living in cities. We need to have a discourse about water and alternative forms of housing that can be resilient to the effects of climate change.”

Part of that discourse means asking more questions, says Pomeroy. “How do you become more energy and water efficient as well as being a power generator to become carbon neutral?” he asks. “And how do you turn to digitalisation as an asset to improve the mobility of large ships and their containers and ships? And rather than having big ships, how about smaller vessels, autonomously controlled, that are more adaptable and sustainable to moving goods to and from shore? And how do we breathe fresh life into these ports with spaces for offices, retail, and hotels? Ultimately, can floating cities shift from an age of industry to cater for the digital/gig economy?”

One of the biggest challenges currently facing sustainable design and eco-architecture is the incorrect perception that they are costly and can be left for future generations to deal with, says Pomeroy.

“We need to wake up to the fact that we’re currently moving at a snail’s pace, this cataclysm is happening now and we can’t wait for official bodies to make changes. Starting at a grassroots level, for our children, we need to enact change as time is running out for us to make a difference,” he says. 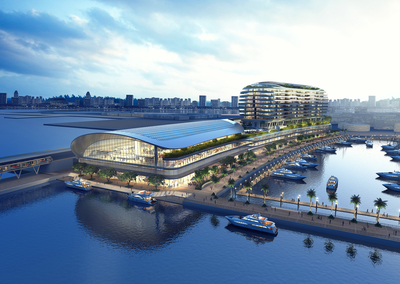 Mel.Harven is an international cruise ship terminal with exclusive high-end residential and retail development, in the heritage city of Melaka, Malaysia also designed by Pomeroy Studio.